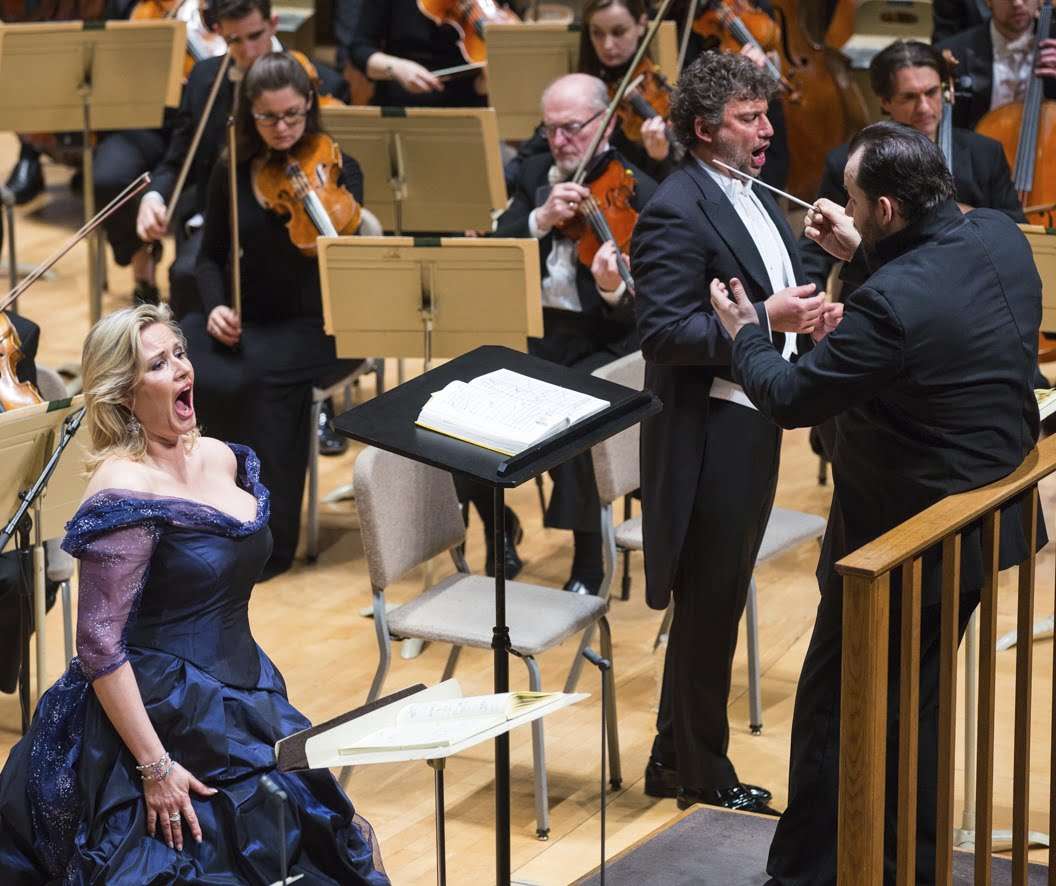 This Boston Symphony Wagner concert opened with one of the composer’s few instrumental works still heard today, Siegfried Idyll, first performed on Christmas morning 1870 as a chamber-music piece and a surprise birthday gift for his wife, Cosima. Wagner intended the music to remain private, but pressed for money he expanded the scoring and published it in 1878. Siegfried refers to the couple’s then infant son. Nowadays the piece is frequently performed with a full string section, as it was on this occasion, but it remains an exceedingly intimate piece. Taking a relatively slow tempo, Andris Nelsons drew a heartfelt and richly-contoured account, the BSO strings and woodwinds producing an especially radiant sound. The easy pace reinforced the grace of Wagner’s lush and tender music, creating an amiable mood.

Following intermission, the BSO and a stellar cast of singers gave a stirring account of Tristan and Isolde, the second Act, in which the doomed lovers finally succumb to their irresistible passion, only to be discovered by King Mark – Tristan’s uncle and lord, to whom Isolde is betrothed – the heart of the opera and one of the most dramatic segments in Wagner’s canon. Under Nelsons, the BSO played superbly, bringing Wagner’s resplendent music vividly to life, and opening with a special urgency.

Jonas Kaufmann was taking on Tristan for the first time, and Camilla Nylund was also making her debut as Isolde. Relying heavily on their copy, the two leads delivered their impassioned ‘Liebesnacht’ standing on opposite sides of Nelsons’s podium. After a somewhat disappointing beginning in which their voices sometimes failed to rise above the orchestra, the singers eventually hit their stride and became stronger. But overall, while both demonstrated appropriate ardor and delivered some beautiful singing, they gave the impression that they were still finding their way into these daunting roles.

The standout performances were delivered by Mihoko Fujimura as Isolde’s faithful maid, Brangäne, and Georg Zeppenfeld as the haunted King Mark. Fujimura was in exceptionally strong voice, her rich mezzo easily filling Symphony Hall, even when delivered from off-stage. And her highly effective facial and body expressions added great dramatic depth to her brief but memorable appearances. Coming in near the end Zeppenfeld stole the show with his poignant and powerful interpretation of the benevolent king betrayed by his trusted nephew. Reprising a role he has sung at Bayreuth, and performing without a score, he totally embodied the part, delivering an absolutely riveting monologue, marked by consummate precision in tone and diction.