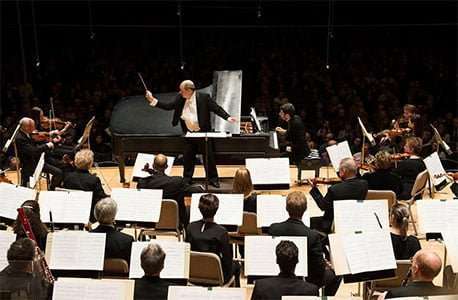 For his third Boston Symphony Orchestra commission, Bernard Rands has composed a Piano Concerto that honors his 80th-birthday year. Written for Jonathan Biss, this was the fourth of its world premiere performances.

Born in England, Rands has been a resident of the United States since 1975. He taught for many years at Boston University and at Harvard. The nearly-30-minute Concerto for Piano and Orchestra has a fast-slow-fast structure and emphasizes wit and subtlety over virtuoso display, an essentially introspective and restrained character if with very intricate and intimate writing for piano. The affecting central section, marked “Slow, quiet, vague and mysterious” (each movement carries a metronome indication and a suggestion of mood) re-imagines music from 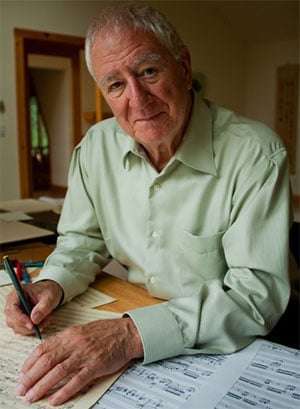 ‘Aubade’, the second of Rands’s Three Pieces for Piano, composed for Biss in 2010. The opening movement (“Noble”) begins with a clearly presented, strident idea in the strings, and as the music progresses and ideas pass back and forth between the soloist and different sections of the orchestra, the piano adds increasingly complex figurations and rhythms. The finale, “Delicate and playful”, displays a blazing spectrum of orchestral effects and changing harmonies, leading into a strikingly energetic but still inward-looking cadenza. Following a brief but tempestuous response from the orchestra, this fanciful piece ends with few soft, staccato chords. Brilliantly supported by Robert Spano and the BSO players, Biss gave a thoughtful, technically assured performance.

Beforehand, Spano had led a lucid and lithe reading of the first two movements of Debussy’s 1899 Nocturnes. In the ephemeral opener, ‘Nuages’ (Clouds), the BSO delivered a gorgeous display of shifting colors, especially the woodwinds, with a particularly noteworthy contribution from Robert Sheena on English horn, and in ‘Fêtes’ (Festivals) the brass and percussion displayed wonderful vigor and precision. The evening ended with a robust, occasionally raw, rendition of Rachmaninov’s ‘swansong’ Symphonic Dances (1940, composed for Eugene Ormandy and the Philadelphia Orchestra), vividly conveying the work’s contrasting moods, especially the pulsating assertiveness of the first, with its strikingly plangent saxophone-led middle section, and the irony in the troubled second-movement waltz.