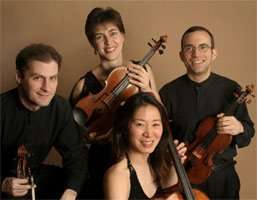 Haydn’s F major String Quartet from Opus 77 was commissioned by Prince Lobkowitz, who was also a sponsor of the composer’s counterpoint student Beethoven. The work, meant to be part of a set of six, became Haydn’s last completed string quartet. The Brentano members approached it with confidence. Mark Steinberg’s warmth of tone shone through even the softest pianissimos. He had a tendency to underplay his role as leader, thus emphasizing inner lines and harmonic movement, bringing a sense of freshness to the work. His quick runs were fluid, though not in strict time, yet felt stylistically correct.

The players’ ability to make huge shifts in tonal color was apparent in the Minuet, in which the playful duality of two-against-three contrasted incisively with the resonance of the Trio section.The Andante began with Steinberg and Nina Lee in an exquisitely balanced duet, which dropped in volume without loss of tonal beauty when the inner voices entered. The finale was taken at a brisk pace, and Steinberg’s showy runs were effortlessly executed. The performance consistently maintained its exciting vitality.

The same could not be said of Stephen Hartke’s Night Song for a Desert Flower. The composer describes the work as “a book of madrigals for string quartet”, in which the structure is determined by emotional qualities. The lighthearted opening ‘Madrigal’ movement was dissonant yet bland, pretty but fell short in terms of contrast and drama. The following ‘Lament’ was slower and mostly calm. Lee’s solo, utilizing the cello’s entire range, was more intense, yet the accompanying figures, annoyingly stuck on their pitches, drained the excitement. The Brentano musicians did their best to give it some shape, but this was a monotone affair. The ‘Intermezzo’ incorporated some jazzy rhythms, which gave it some momentum to propel it out of the doldrums, and these riffs, often paired with bell-like harmonics, gave it a particularly non-classical feel. The players changed bows for the final ‘Rejoissance’, and it was soon apparent why. The movement began with col legno passages taken at great speed, and the special effects kept the interest somewhat engaged.

The seven linked movements of Beethoven’s Opus 131 take the listener on a journey through the entire gamut of the emotional spectrum. From the initial notes of the opening Fugue, Steinberg displayed his ability to hugely vary his tonal quality within a single bow stroke, with the other members sharing his superb sense of musicality. The Fugue was stark and wonderfully unsettling, with each note drenched with meaning. The subsequent Allegro was an abrupt change of heart, yet did not shed the sense of lingering suspense, and the simplest accompanying passages were subtly nuanced. The players possessed that rare quality of being able to enthrall with the quietest of dynamics, yet they also could create a massive blast of sound, as they did in the final Allegro. They were not afraid to sound ugly, and at times they did, which seemed to be just what the end of this intense piece demanded.