Dancers of the Royal Ballet 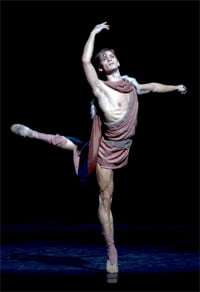 Where is Sylvia? Where indeed is that delightful jewel of the Ashton canon, so brilliantly reconstructed by Christopher Newton for the Ashton Centenary celebrations in 2004? It pains me to report that Frederick Ashton’s Sylvia is not at present to be found as performed by The Royal Ballet in their latest revival; in its place is an approximation, a coarse version characterised by a generic, unspecific dance style. That Ashton’s own company should perform his choreography in such a manner is deeply depressing – there seems to be no concept of the reality that the dance world look to The Royal Ballet to perform his work, and that of Kenneth MacMillan in as ‘authentic’ a manner as is possible, and in the same way we look to the Danes to dance Bournonville or the New Yorkers to perform Balanchine.

The only true finesse on show remains in the design by the Ironside brothers with additional material by Peter Farmer. Their playful evocation of troisième empire stagecraft and scenic sensibility is a delight, an evocative sylvan glade, a tropical hide-out and a harbour scene à la Claude ravish the eye, their costumes rich and ever-pleasing. Would that such sensitivity were shown in the orchestra pit – I had had high hopes, given the orchestra’s lustrous performances in the company’s most recent quadruple bill, but under Boris Gruzin, the sound was coarse, with the brass leading the way in brashness, having ‘settled’ after a distinctly out of tune start in the overture. To blast one’s way through this enchanting score is not to do it justice – it was hard to hear what Tchaikovsky famously heard in it and caused him to admire so much. A less muscular approach to what is, after all, French music would reap dividends, I am sure. A cruel disappointment. 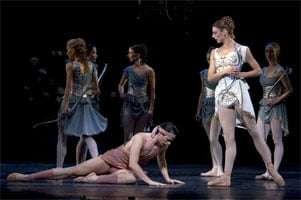 The coarseness was emulated by the dancers, who at times looked cruelly under-rehearsed. By Act III, the corps de ballet had pulled things together, but stylistically, theirs was but an approximation of Ashton’s subtle and witty style; torsos remaining resolutely rigid when they should have bent, body lines vertical when more suppleness was required; some dancers found the speed required by their founder choreographer a little too much, with precise footwork smudged in their hurry. The pas des chasseresses, musically one of the most famous ‘numbers’ in the score, and here witness to an outpouring of glorious, Amazonian choreography from Sir Fred was a scrappy affair, again characterised by an unwelcome hurried ambiance.

Some soloists stood out from the stylistic desert, notably Paul Kay and Iohna Loots as a pair of very perky goats in Act III, and Christina Arestis, an expansive Terpsichore true to Ashton. Gary Avis as bad guy Orion impressed with his forceful stage persona, although he has coarsened his interpretation somewhat, he nevertheless remains a superlative partner. Rupert Pennefather made much of what is a non-role, that of Sylvia’s love Aminta. His acting in Act I was believable and nuanced, and he both danced and partnered strongly in the Act III pas de deux, although he would do well to attend to his hands, which, with a little attention, could become more expressive. 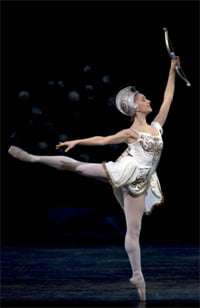 And so to Marianela Nuñez who is a superlative dancer with a technique as strong as could be wished for. She is a delightful performer, clearly relishing her time on the stage, and possessor of an open and honest stage personality. But she is not yet Sylvia. This role, conceived as a ‘garland’ for Margot Fonteyn needs more than technical tricks (Ashton would have vetoed quadruple pirouettes as vulgar and unnecessary). I have written in the past about Nuñez’s ‘brightness’ on the stage, the fact that she paints more in acrylics than in oils, let alone watercolours. Every step is forcibly made, expansive and emphatic – where Ashton supplies grace-notes, half-moments of movement, Nuñez expands them, plays them full out (much like the orchestra) and thereby robs the role of its nuance and its subtlety. In this performance she was also worryingly ‘off’ the music in too many crucial moments, robbing the choreography of its sophisticated relationship with the score.

Nuñez is a gloriously talented dancer, make no mistake, but her transition to the next level of artistry continues to be hesitant – whereas she made a beautiful and wholly successful Masha in Winter Dreams recently, a role in which her technique was placed entirely at the service of the choreography, Sylvia sees her return to old form – mightily impressive but without variation. That lack of variation made for little difference between the Sylvias of each of the three acts, conceived by the choreographer as an exploration of Fonteyn’s scenic richness – in the words of the late Clive Barnes, “Fonteyn triumphant, Fonteyn bewildered, Fonteyn exotic, Fonteyn pathetic, Fonteyn in excelsis”.

We look to this company to perform the works of their Founder Choreographer better than any other company in the world, we look to The Royal Ballet to demonstrate the stylistic sophistication and nuance that he created for them and made their name around the globe, and we look to them to demonstrate his heart-stopping musicality which metamorphoses mere movement into art. We continue to look.