Award presented by HRH The Duke of Kent 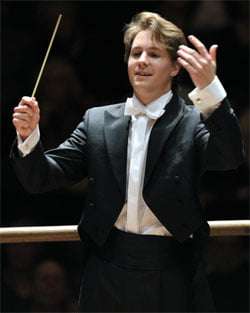 The biannual Donatella Flick Conducting Competition here continued in tried and trusted fashion, a three-day concentration of auditions (using Guildhall School of Music facilities and students) and the whittling of twenty hopeful young conductors down to the Final three who rehearse with the LSO on the day for the defining concert.

Each of the three finalists conducted the Overture to “Die Fledermaus”. The left-handed, memory-trusting Kristiina Poska (32, Estonian) gave a rather liberal account, yet tempo-fluctuations became mannered, and if Carlos Kleiber’s reading of this score was sometimes suggested, the lack of poise and exacting timing made the effect bitty (Kleiber’s genius absent); Poska did make an ideal turn into the coda, though, something usually fussed over. She then turned to Capriccio italien, a mixture of matter-of-factness and intense expression, an agreeable lilt and al fresco urbanity. What troubled here were some imbalances that lost the strings to the rest of the orchestra. Sound per se and just balance does not these days seem top of conductors’ priorities.

Ken-David Masur (33, German, and son of Kurt Masur), had a straighter if more efficient view of the Strauss, somewhat lurching in tempo changes and missing the fun this piece has in abundance. Similarly, the Kodály lacked for fantasy (save in Chris Richards’s clarinet solos) and humour, Masur making the folksy confection rather overwrought, the faster music well-drilled (if without the unforced swing that Celibidache and Fricsay used to conjure) but blurred with decoration that needed subtler layering. Once again there was a tendency to over-project wind and brass at the expense of straining-to-be-heard strings.

Come the interval, the Winner seemed to have not yet arrived.

Clemens Schuldt (27, Germany) seized his chance. The Strauss – at last – had playfulness, affection, lightness of touch and beguiling shaping. From operetta to music-drama and Wagnerian bookends that Schuldt took daringly slowly and with a theatrical potency that extended through silent bars. For the first two conductors, the LSO had done their bidding with alacrity, ample proof of the power of a director’s gesture to have an effect, however small, on how the music should progress and be addressed; with Schuldt, however, there was a collective focus from the LSO suggesting that this Wagner really meant something to its members who played with much feeling, a significant response to Schuldt’s assurance and his lucid music-serving indications. With concern for sound (the strings had depth and lustre) and across-the-board balance, this was a wonderfully contoured performance, climaxes overwhelming but organically arrived at. This was no longer a competition. Schuldt had surely won.

The Jury (including Gennadi Rozhdestvensky, 80 next year, a rare visitor to London these days, but hopefully the LSO and he were checking their diaries) didn’t take long to deliberate. And, indeed, Clemens Schuldt took the Prize. On the strength of these 30 minutes’ of music, Schuldt seems to have a manner and technique that serves well the very complete musician that he already appears to be.

The next Donatella Flick Conducting Competition is in Autumn 2012.