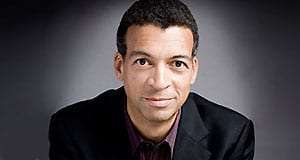 The Britten Sinfonia’s ‘at Lunch’ series continues to plot an inventive course of programming, and this hour-long concert brought the Britten Sinfonia Voices to the series for the first time. Their subject-focus was an improbable combination of drinking songs and a sense of eternity, interweaving seldom-heard SATB songs by Schubert with two new works from baritone-composer Roderick Williams (born 1965). He it was that provided the opening fanfare, a musical joust between Joy Farrall and Tom Poster. Based on a duel between Oscar Peterson and his guitarist Joe Pass, it was an invigorating taster for what lay ahead, with Poster’s motoric rhythms and Farrall’s impudent phrases a good match.

Schubert’s settings for male voices are heard on occasion, but the works for mixed chorus are altogether rarer. Many of them were written for a specific function. ‘Der Tanz’ was brightly sung, as was ‘An die Sonne’ initially, but the singers paced their interpretation well as the music became rather sombre and preoccupied. The first of Williams’s two premieres was next, a setting of text by Karen Hayes for the Voices, clarinet and piano. After an evocative instrumental introduction that suggested Berg, even Scriabin, Williams’s rounded vocal-writing set an enigmatic course, about the underlying theme of an individual set against a local community. In this way the influence of Britten could be felt, something also be detected in the importance afforded to the text, clearly heard at all times. 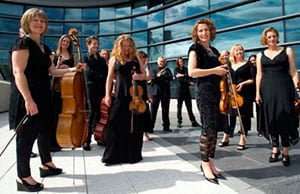 This also worked in the more humorous context of the second premiere, In his cups, also setting of Hayes, for which four singers sat down at a table in the centre of the stage, drinks in hand. Farrall’s clarinet – a visual outsider on this occasion – retreated beyond the open door of the green room, playing away from the audience. This gave a nice sense of perspective, the excited hubbub of the drinkers contrasting with Williams’s brighter more-controlled singing. Neither of Williams’s settings was especially conclusive, but one sensed this was the composer’s objective, to leave the audience with material to ponder.

We also heard two Schumann songs from the Opus 39 Liederkreis. The stark ‘Auf einer burg’ lacked chill here, due partly to Williams’s rich timbre, but ‘Mondnacht’ was poised and descriptive, thanks also to Poster’s evocations of moonlight. Four further Schubert settings revealed the composer’s ability to write music for domestic occasions and friends. ‘Trinklied’ was written when the composer was just sixteen (and under age!). The vocalists enjoyed his unbuttoned humour. The later ‘Schicksalslenker’ is far more serious in tone, the composer contemplating existence through a meditative baritone solo added to the vocal quartet, and here excellently sung by Williams. Another drinking song, D183, threw caution to the winds, the singers clinking glasses for an enjoyably shrill ode to friendship and wine. The Britten Sinfonia Voices found the right brightness. It was to theirs and Poster’s credit that the impetuosity and good grace of the composer, writing for his community, came to life.