There cannot be many non-professional orchestras that have been going for one-hundred years, but the Bromley Symphony has carried the flag for classical music in south-east London for just such a period, in the course of which its chief conductors have included Sir Adrian Boult and Norman Del Mar. Among artists to have appeared with it are Kathleen Ferrier, Dennis Brain, John Lill, Paul Tortelier, Leslie Howard, Emma Johnson and Sir Donald McIntyre.

Adrian Brown has been at the helm for forty seasons; still the only British conductor to have reached the finals of the Herbert von Karajan Conducting Competition in Berlin, he has raised the standards of the Bromley Symphony to a high level, as we heard throughout this centenary event.

Enlarged to ninety players, with twelve cellos and seven double basses, in the Langley Park Centre – a purpose-built concert-hall with splendid acoustics – the BSO marked its anniversary with a unique programme.

Rather surprisingly not one of the works chosen showcased the orchestra throughout in familiar music, but to end with Beethoven’s ‘Choral Symphony’ was wholly appropriate. Rather less so, to open proceedings, was Benjamin Britten’s arrangement of the UK National Anthem; for purely celebratory occasions, Bliss’s luxurious and utterly uplifting version, always so thrillingly effective, would have been better, convincingly performed though Britten’s dramatic, if somewhat moody, arrangement was.

The vocal forces partnering the orchestra were virtually identical in numbers – a choir of ninety-four singers. Hubert Parry’s wholly choral Blest Pair of Sirens has had many admirers, including Boult, who made two recordings of it, and now Brown, whose introductory remarks to the audience ended with “let’s perform this great work”. The result was an account suffused with warmth and integrity, Brown’s tempos ideal for the span of the music, a work which Elgar particularly admired though never sought to emulate. The account as a whole conveyed the richness of the eight-part choral writing, Parry’s melodic spaciousness and his equally rich orchestral writing, as well as the balance between the mutually supportive thick textures. For greater understanding of this rarely-heard work, Milton’s text ought to have been provided in the printed programme. 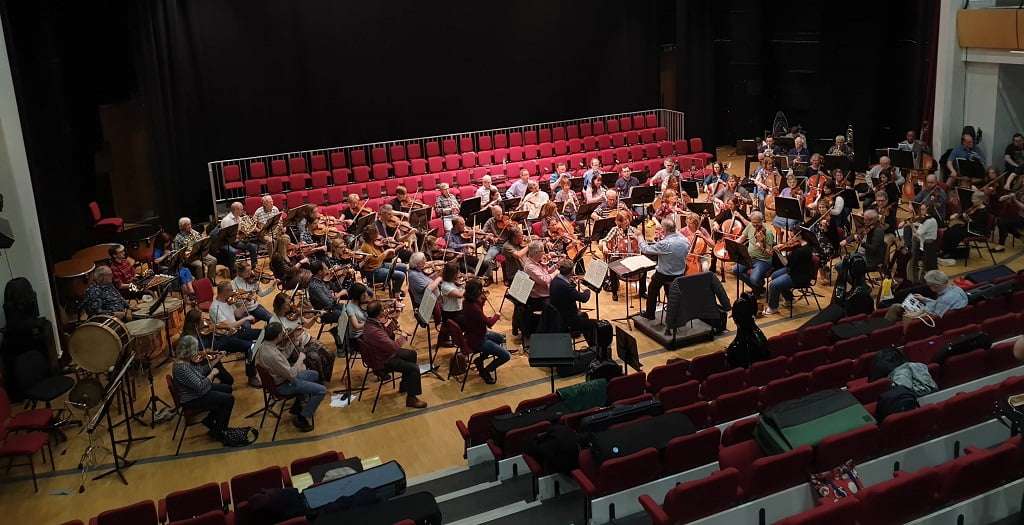 To mark the centenary further, a competition for composers was launched some time ago, asking for new unperformed scores. Chosen by Paul Patterson from a competition panel chaired by Brown, the winner, Europa, would appear to be another musical depiction of the fate of the young woman at the hands of the God Zeus, who, in the guise of a bull, rapes her.

Whether the lurid details of the ancient story either inspired, or are depicted in his music by the successful twenty-seven-year-old Dutchman Marco Muilwijk, one was uncertain as to the precise aim of his work, for the programme note was unforthcoming and, unusually for Brown, there was no introductory talk. Heard as an abstraction, however, the music, in the course of its ten minutes, lacks individuality of material and genuine creative impetus in its varying from the not overbearingly angular to the doleful. We learned, however, that Europa – the title appropriate in the current political climate – is Muilwijk’s first attempt at writing orchestral music. To have won such a competition in such circumstances is remarkable. He was present, and other entrants for this competition will be performed in the BSO’s 2019-20 Season.

At the first performance of Beethoven’s Ninth Symphony in 1824 over 180 musicians took part, so it was with virtually identical strength that the BSO performed it. As the Symphony unfolded, it became clear that Brown was delivering a reading of genuine musical truth. Using the latest Jonathan Del Mar edition, and making all the repeats in the Scherzo, this was an account of no little stature. In expression and consistent specific insight into Beethoven’s logic, Brown was able on many occasions to supply the sine qua non of deep musicality to this imperishable masterpiece. In terms of architectural and emotional structure, this account was a true revelation of Beethoven’s Ninth – this, I am certain, was throughout what the work is about.

Brown had every performer with him, a quartet of truly excellent vocal soloists and a choir that sang with total commitment. Brown’s conducting was that very rare thing – a searching comprehension of the way in which Beethoven, surely, meant his work to be heard – although he, of course, only imagined it in his inner creative ear. Nonetheless, the music speaks to us today with a power that borders on the immortal, and the demonstrable respect in which Brown held his fellow-musicians contributed mightily in inspiring them to an outstanding performance.