Gilbert & Sullivan
Iolanthe or The Peer and the Peri [Comic Opera in Two Acts; libretto by W S Gilbert with music by Sir Arthur Sullivan] 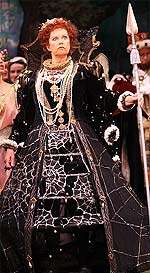 However, ten years ago Peter Mulloy had the idea of reviving the Carl Rosa name for his company and has once again made it a national institution, doing the sort of work that Carl Rosa (originally Carl Roze) pioneered in Britain and around the world.

The question is whether or not we still want to see traditional G & S productions. Until the operas came out of copyright, nobody could change anything. Their status was closely guarded, which is probably why the D’Oyly Carte company has now ceased to flourish. It has taken the likes of Sadler’s Wells, English National Opera, the Open Air Theatreand, most radically Joseph Papp’s production of “The Pirates of Penzance” in Central Park, New York and at the Theatre Royal, Drury Lane to open things up. However, as far as I know, the Royal Opera House has never staged Gilbert & Sullivan. At the moment, comparisons in London are perhaps invidious, as last week we had the Rosa company competing against English National Opera’s “The Mikado”, the ground-breaking staging by Jonathan Miller. 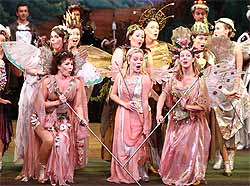 For the new Rosa Company’s first West End season at the Gielgud Theatre, presented by Raymond Gubbay, Peter Mulloy wanted to make it a Victorian Theatre season including recreating the Victorian scenery and costumes and the Victorian practice of inviting guest artists. The trouble with that is that the productions become set once again in a kind of theatrical aspic. Gilbert & Sullivan’s operas are weird to begin with, creating a ‘topsy-turvy’ world that never really existed, a world in which fairies and lords of the realm cavort together, where all pirates are orphans, where a lowly Japanese tailor can become a Lord High Executioner, where a pair of gondoliers can change the monarchy and where ghosts can come to life. Most of their inventions were satires on the society of the time, its social mores, laws and public behaviour. These matters don’t really bother us now and in fact are pretty meaningless and come across as merely quaint, even in W. S. Gilbert’s often clever and witty lyrics. What is beyond criticism, however, is Sir Arthur Sullivan’s luscious and lilting music. 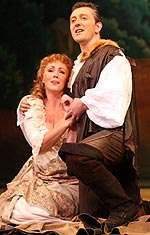 For “Iolanthe” at the Gielgud, director and designer Peter Mulloy gives us a Laura Ashley-style set which wouldn’t look out of place in a Victorian pantomime. The orchestra is made up of fairly small forces and produces a pleasant sound; anything more might drown the singers which comprise principals and a smallish chorus. As long as you are a dyed-in-the-wool G & S fan, you can swallow the strange plot about a group of fairies bemoaning the fact that one of their kind, Iolanthe, has been banished for 25 years for marrying a mortal. Her son, Strephon, a shepherd, is half-fairy and half-mortal, and is in love with Phyllis, a shepherdess. Phyllis cannot believe that Iolanthe is Strephon’s mother because she has not aged in a quarter of a century. Broken-hearted, she agrees to marry one of the peers. A typical G & S plot follows with an inexperienced person (Strephon) going into Parliament with some success. Subsequently all hell breaks loose as the fairies decide they fancy the mortal peers.

Sometimes the plot threatens to sink the production but there are saving graces. The band of fairies are a game crew, led by the exuberant Iolanthe of Sophie-Louise Dann, while Charlotte Page makes Phyllis a pretty shepherdess. Veteran Steven Page gives the Lord Chancellor some real gravitas, particularly in ‘Love unrequited robs me of my rest’. Karl Daymond is a natural for G & S and delivers a truly comic performance as Strephon. Donald Maxwell’s Private Willis, the Palace Yard sentry, is suitably lugubrious in ‘When all night long a chap remains’ but threatens to overdo the mugging almost as much as some of the other male performers.

The staging lights up, however, whenever guest star Maria Ewing appears. Looking like Carla from “Coronation Street” dressed as Cruella De Vil, she plays the Queen of the Fairies with deliberate determination, rather like Dame Edith Evans in “The Importance of Being Earnest”. It is a splendid characterisation; she might make a good Katisha in “The Mikado”.

Ewing and the production received an enthusiastic reception from the first-night audience.