The CBSO’s 2018-19 season came to a resounding end with Berlioz’s The Damnation of Faust (1846). The most ambitious of its composer’s hybrid conceptions, this has long proved resistant to staging as an opera, as the current Glyndebourne production – in which Robin Ticciati gallantly fights a losing battle with Richard Jones’s cliché-ridden production – only too readily confirms. The present account presented Faust as the concert-drama it essentially is and succeeded handsomely. 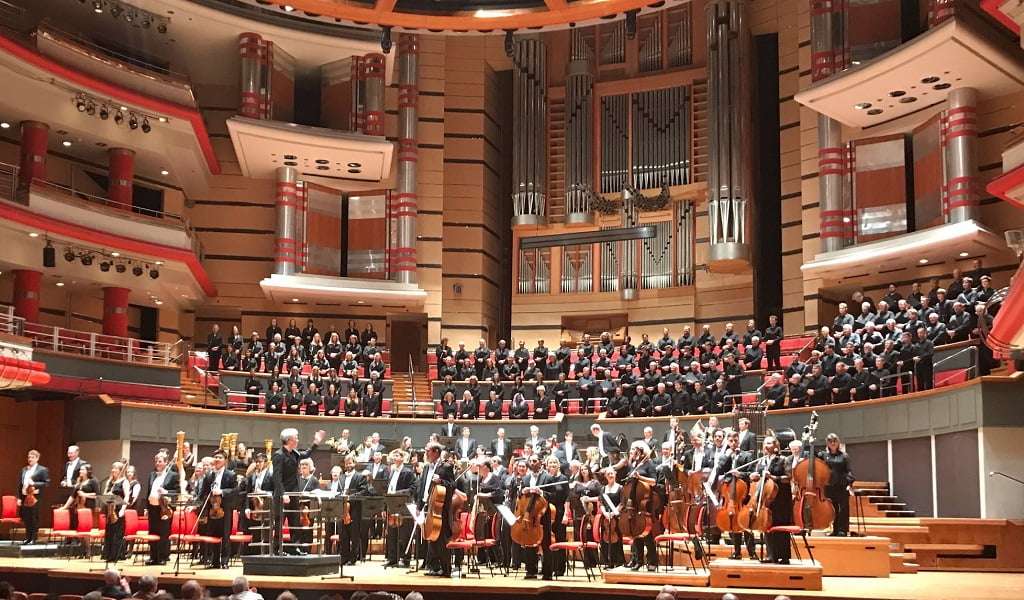 In part this came about through utilising front-of-stage as the means of delineating character – Faust and Mephistophélès appearing sometimes as a slapstick double-act, while at other times a manifestation of ego and alter-ego the more unnerving for seeming so intertwined. That this was achieved merely by the singers moving between the centre, sides and behind the platform ought to give directors of all aesthetics pause for thought. It helped when Hugh MacDonald’s surtitles were neither affected nor tricksy but easily assimilated and unfailingly to the point.

Saimir Pirgu projected Faust in all his restless, indeed reckless searching without any hint of caricature; not an admirable figure though hardly a deplorable one. Whether in his plangent initial monologue, ardour of his duet with Marguerite or desolate Invocation to Nature, here was a complete assumption. Singing with sonorous magnetism, Joshua Bloom was unafraid to send-up Mephistophélès – whether in the bravura of Song of the Flea or ironic slyness of Serenade – yet there was no doubting the veracity of this portrayal in his address to the infernal residents after the descent into Hell. The role of Marguerite was eloquently taken by Christine Rice, witness her wistful King of Thule ballad or aching pathos of the Romance as she laments Faust’s absence, while Božidar Smiljanić proved suitably uproarious as Brander.

Whatever its generic status, this Faust has a choral role comparable to almost any opera in the Romantic period – one to which the combined forces of the CBSO choirs was enthusiastically suited. Whether in the vivacity of the peasants on the Hungarian plains, the ribaldry of those frequenting Auerbach’s cellar (and culminating in an ‘Amen’ of lascivious coarseness), or the interrogative anger of Marguerite’s neighbours on having discovered her amorous encounter with Faust, the sheer precision as well as vibrancy of their contribution was always palpable.

Nor was there any lack of commitment in the orchestral playing, with the CBSO responding wholeheartedly to Edward Gardner’s incisive though never overdriven or inflexible direction. This is a score which abounds in significant cameos for solo instruments, from among which Adam Romer’s viola in Marguerite’s Thule Ballad and Rachael Pankhurst’s cor anglais in the character’s ensuing Romance left a haunting impression. The impact of the climactic scene in Hell could hardly be gainsaid, while the heavenly conclusion evinced a rapture shorn of sentimentality.

The CBSO has given numerous accounts of this piece (not least conducted by Louis Frémaux and Simon Rattle), but in terms of its overall quality Gardner’s performance vindicated Berlioz’s singular conception in no uncertain terms.