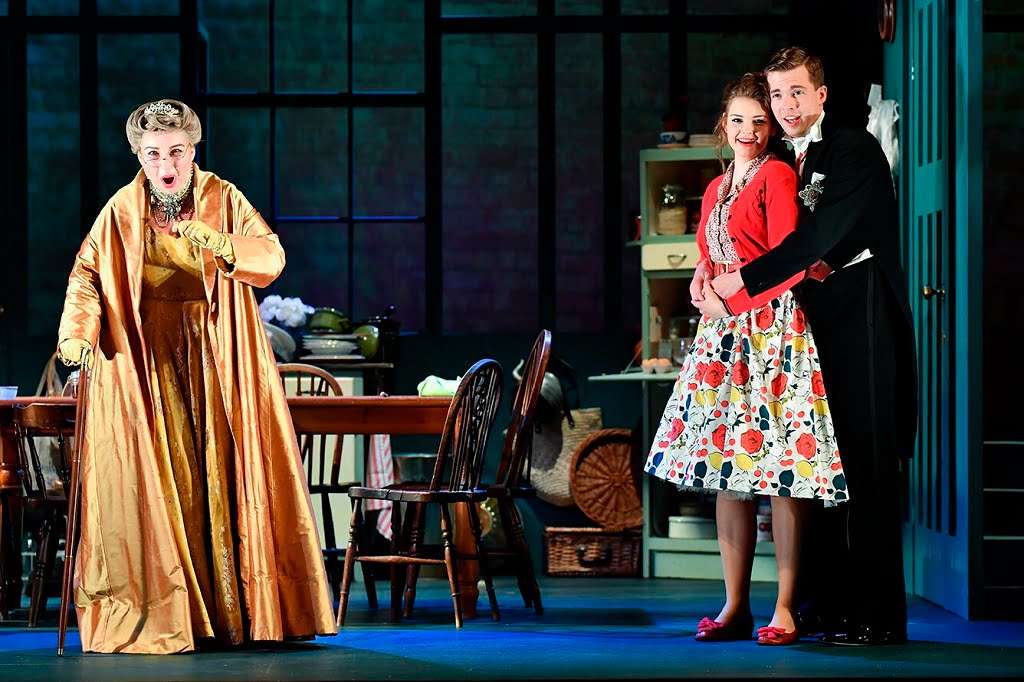 If anything, these one-Act operas are diametrically opposed – in Sir Lennox Berkeley’s A Dinner Engagement, love blossoms in very adverse conditions, while in Leonard Bernstein’s Trouble in Tahiti, love has withered and there is no way back. Both scores, however, are united by being written in the 1950s, when drab, impoverished postwar Britain gazed with envy and amazement at the sleek, postwar American Dream unfolding on the other side of the Atlantic.

Stephen Unwin’s productions nail the Fifties efficiently, in the Berkeley by way of Nicky Shaw’s clothes and a grubby basement utility kitchen in Chelsea. This is where the aristocratic if broke Lord and Lady Dunmow are busy ruining dinner for their royal former employer the Grand Duchess of Monteblanco and Prince Philippe, her unattached and glamorous son. The Dunmows hope against hope that something might click between the Prince and their similarly single daughter Susan. The Dunmows rely on the help of their “treasure” Mrs Kneebone, who is pretty sharp. Amazingly, in this riff on Cinderella, all ends well.

No stone is unturned in terms of accents foreign and class-defining, and Berkeley and Paul Dehn (who, in an extraordinary career, included being screenwriter for the Planet of the Apes films, Goldfinger, and The Spy Who Came in from the Cold) neatly embrace the period’s enfeebled old order not getting to grips with a more déclassé society. The Earl sings wistfully of his glory days as Envoy to Monteblanco, and the Grand Duchess, anticipating roles such as Madame Arnfeldt in A Little Night Music, rises serenely above a rackety present also to seek solace in the past. The more pragmatic Countess only has her daughter’s future in mind, and her daughter has a mind of her own.

Berkeley’s music wittily wraps round the “have you come far?” niceties of Dehn’s conversational libretto, shown off from the start by Edward Jowle who, as the Earl baffled by life, gears his attractive baritone to nostalgic advantage. As his wife, Katy Thomson, with an apron protecting a bit of her evening gown, is a delight reverting to diplomatic type to keep catastrophe at bay through a sly sense of comedy and incisive singing. Jessica Cole subtly keeps her finely-sung Susan away from youthful strop, and you sigh for her as she and the Prince connect. And you also sigh when you hear Guy Elliott’s elegant tenor rising to the occasion as Susan’s handsome Prince and the Dunmows’ saviour. Elliott leaves you in no doubt that he has the nearest thing to a show-stopping aria. Rebekah Jones does well to keep caricature at a distance as the Duchess, Laura Hocking’s keen performance made Mrs Kneebone seem a bigger role that it is, and Matthew Keighley’s worldly-wise Grocer’s Boy exacerbated social differences by refusing to be paid on account.

Some excellent exposed moments for piano as well as memories of the Guildhall School’s production last year suggested a cautious approach to Berkeley’s Gallic-flavoured score, conducted by Michael Rosewell, and overall the opera at an hour seems too long. ★★★ 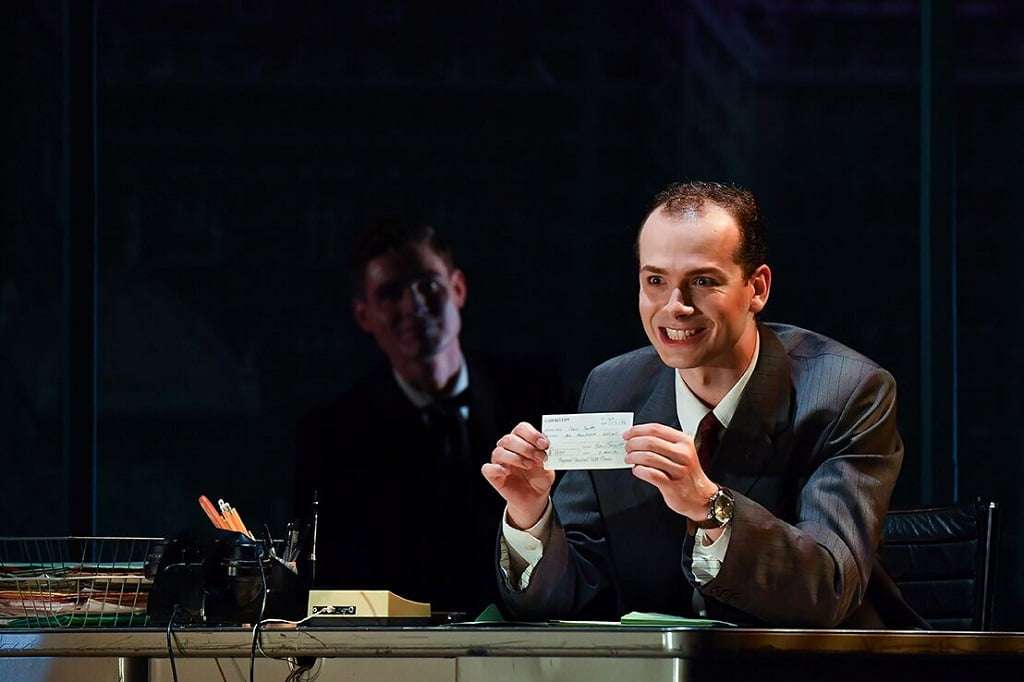 Longueurs, idiom and attack are not a problem in Unwin’s staging of Trouble in Tahiti. The set is minimal, based largely on projections of urban Manhattan and suburban cosiness, but immensely stylish nevertheless. Bernstein wrote this satirical musical/opera hybrid for television in 1952, based on family life with his parents, and its fifty-or-so minutes are brimming with numerous insights, great tunes and brilliant orchestration (using here the skilful reduction by Garth Sunderland). The success of this production is primarily the result of the best close-harmony trio I have seen and heard in this work. Their choreography and moves are a triumph, the singers have the sort of blend that you could only peel apart when one of the ultra-attractive voices momentarily broke cover, and they turned in an instant from tenderness to withering irony.

Tenderness and irony are vital to this portrait of Sam and Dinah’s worn-out marriage – he completely absorbed in his career; she going from sessions with her analyst to afternoon movies (one of which gives the title). They both look their parts. James Atkinson’s baritone has the necessary top notes and he warmed up to his belting, macho ‘There are men’ song of praise to his other obsession, the gym. Anna Cooper’s mezzo has the colour, if less of the Broadway heft, for Dinah’s distress, but ‘There is a garden’ (‘Porgi amor’ for the 1950s) worked its sad magic, even more so in the scene where Sam and Dinah wife meet by accident during the day and lie to each other about their lunch dates. There was a wild clarinet solo near the start which set the bar high for some very snappy playing.

One of these days, I hope, a London college will take on Bernstein’s A Quiet Place, which places Trouble in Tahiti at the centre of a longer opera about the extended fall-out from the failure of the American Dream. Bernstein certainly knew the worth of this piece. Meanwhile… ★★★★★