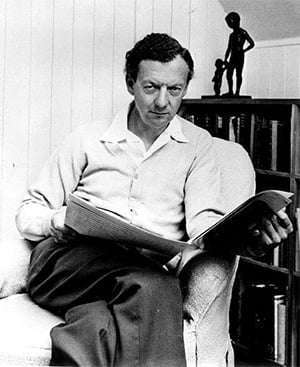 Benjamin Britten wrote his three Church Parables between 1964 and 1968. Each one carries the inspiration of a trip to Japan with Peter Pears in 1956, where the composer was greatly taken with the methods of stage performance and drama employed in the Noh, a form of Japanese drama. This left its mark on the music, appearance and William Plomer’s librettos. The pieces, each roughly an hour, take a ‘less is more approach’ to each discipline, beginning and ending with a procession into the church by chanting monks, whose music then forms the basis for the subsequent material. The monks change their robes, taking on the guises of the characters, here on a wooden stage erected at the midpoint of the nave in Southwark Cathedral. The first London performances of the Parables were here, the composer conducting, so it was entirely appropriate that Mahogany Opera and members of Aurora Orchestra, led from the organ by Roger Vignoles, should bring the works back to their capital ‘home’ as part of the City of London Festival. Texts were not available, so clear singing was imperative and almost always achieved. The works were not performed in chronological order, and your reviewer saw them in the order listed.

It is normally The Prodigal Son that gets the roughest ride. Even some of the Britten’s most passionate followers see it as derivative from The Burning Fiery Furnace, weak in its overall plotline and unsatisfactory in its resolution, which Britten had to write considerably later due to illness. And yet, as this performance revealed, there is much to this Parable that carries a relevant message, and with parallels to Britten’s own life. He and Plomer expand a little on the New Testament inspiration, keeping its central characters and meaning, but introducing a ‘tempter’, played here by James Gilchrist, who leads the younger of two sons to rack and ruin through drinking, gambling and sex. Initially he operates in a way that draws an uncanny parallel to Britten’s association with W. H. Auden, and the composer’s use of the viola – his own instrument – further enforces the biographical slant. Yet here the younger son’s fate, spending all his money amid the empty glamour of a big city, carried special resonance for a Festival whose entire programme takes place in and around the banking halls of London.

It is true that Britten relies on very simple cells of music for the germination of an hour’s worth of drama, but this rendition showed how effectively these are galvanised. The music for Father is appropriately warm; Lukas Fabianski’s presence as actor made up for the fact his voice was largely indisposed. A special mention should be made for James Arthur, who sang from a pulpit in such a fashion that the performance was never undermined. As the Elder Son, Rodney Earl Clarke was appropriately aloof, while John McMunn as the Younger Son took his role of corrupted innocence and led with it powerfully. The supporting cast was extremely effective, and with one eye each covered in face-paint there was a frisson to the moments when they looked sideways, as one, to the audience. With the opening procession, too, the company dressed as monks with their hoods up, had sinister overtones in the gathering gloom of the Cathedral, but the wry scenes in the ‘city’ went the other way, the drunken cast on their backs waving their legs. Ben Payne’s lighting design was very effective, a single beam on Gilchrist as he stood before us as the Abbot, later to reveal his duplicitous side, and the standing statues corresponded starkly with their stone equivalents at the very front of the Cathedral.

The evening’s second performance was The Burning Fiery Furnace, its late start-time maximising the potential of fading light. The Cathedral’s lights were completely dimmed, a candle each at the sides allowing a minimal glow, and the procession of the monks began once again. This time the theme was conversion, Britten interpreting the Old Testament story in which three Israelites, held prisoner by King Nebuchadnezzar, refuse to eat the food or worship the god of their captors. As a result they are condemned to a furnace, but survive the encounter without a hair on their heads being touched. On seeing this, the Babylonian king converts to their religion. Again the use of lighting was an important feature, with clever use of the shadows cast from a single beam to make plays on the far wall. The Furnace itself was depicted by a colourful stained glass construction that could be manipulated both by hand and light. When the three were cast into it their shadows could be clearly distinguished, and a fourth image – that of an angel guiding the prisoners – was perfectly placed.

Frederic Wake-Walker’s direction was more theatrical this time, with more licence for movement among the performers. Some of their actions were deliberately stilted, the king’s footmen dancing from side to side as the royal parade arrived, but the king’s astrologer was more fluid, slithering left and right of the prisoners in his attempts to make them kneel before the idol. In this role Jakobski was again extremely effective, channelling all his efforts into posture and expression as Arthur again gave a fine vocal account from the side pulpit. Gilchrist took on the role of persecutor once more, lapping up the adulation of his subjects but then appropriately awestruck at his prisoners’ powers. Musically this was an especial triumph, and we saw something of a collector’s item with Roger Vignoles playing the cymbal, forming part of the ecstatic worship scene for the Babylonians’ god Marduk, the musicians brought out into the middle of the nave to lead the celebrations. It all made a powerful impact, the dark outer reaches of the venue seemingly endless but helping draw the eye towards the pinpricks of light in the centre.

Curlew River is the longest standing of Mahogany Opera’s three Parable productions. The following night, another late-evening performance allowed maximum contrast of dark and light. The reading got fully inside the mounting tension of the plot, as the Ferryman, in charge of a full boat, encounters a madwoman. Rodney Earl Clarke gave his finest and fullest performance, but with essential humility as the Madwoman’s plight became increasingly clear; James Gilchrist judged this role to perfection, downtrodden beneath a mass of white clothing but becoming ever more upright and urgent as the voice of the woman’s lost son appeared as if on the wind. This, the dramatic apex of Juro Motomasa’s tale, was superbly handled, the passengers on the boat moving from their roles as members of a jury to sympathetic spectators as the Spirit’s voice, sung with glassy eloquence by William Rose, carried clearly through the tumult. The clamour subsided amid one of Britten’s masterstrokes of composition, whereby the voice could be heard ever more clearly.

Once again singers and instrumentalists were as one, getting inside Britten’s idiosyncratic and almost improvisatory writing with disarming ease. Jakobski was sufficiently improved to take on the role of Abbott with singing also, and his tall presence was commanding, while Samuel Evans gave excellent support as the Traveller. Roger Vignoles led the colourful ensemble, whose scene-setting from the side of the church was particularly vivid when describing the motion of the boat. Alex Jakeman’s flute gave an especially descriptive portrayal of the curlew itself. Curlew River carried the greatest emotional punch, but it was a considerable achievement on the part of Mahogany Opera and Aurora Orchestra to give each setting such a compelling presence, fully communicating Britten and Plomer’s artistry.