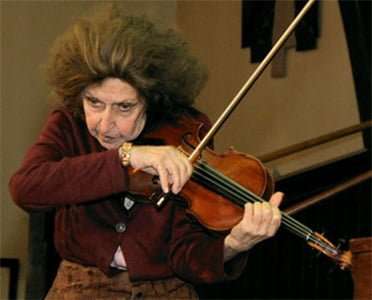 Quite a few violin-fanciers turned out to pay homage to Ida Haendel, who will be 90 later this year, in December – although that statistic is something of an issue, as at one point the great violinist took five years off her age, forgetting that many people would have access to older editions of Who’s Who and other reference books, although she has continued to cite 1928 as her date of birth. Her efforts to juggle the age discrepancies in this interview made amusing listening for those in the know.

It was a rather unsatisfactory evening, as at first we had to listen to a neatly played, if rather safe, performance of Tzigane by Royal College of Music student, Canadian Lyrit Milgram, well partnered by Alison Rhind. And of three pieces scheduled to be played by Haendel, we heard only the Sonata by George Enescu. I would have liked the third movement of Schumann’s D minor Violin Sonata (No.2; Opus 121) – about which she might have had something to say through her violin – and Bartók’s Romanian Dances. 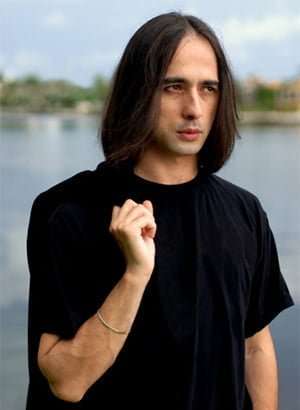 Of the Enescu, I can say that it was the best 89-year-old violin playing I have heard; even if it was nowhere near her 1996 recording with Vladimir Ashkenazy. The style was still there, but not the power or the impetus; and the intonation, while not bad, was not what it would have been even ten years ago. It was style without substance, and I have a feeling that she and her tactful young pianist Misha Dacić cut part of the work – I had not gone prepared, as I had no idea she was going to play.

The interview with Rob Cowan fell rather flat, as Haendel torpedoed every one of his carefully prepared questions. She did not seem remotely interested in the minutiae of her recordings. Nothing wrong with that attitude, you may say, but she did not seem willing to play the question-and-answer game at all. No comments were made about her various conductors except that they never criticised her and were always perfect gentlemen. Similarly we learnt nothing about her relationships with her teachers Carl Flesch and Enescu. 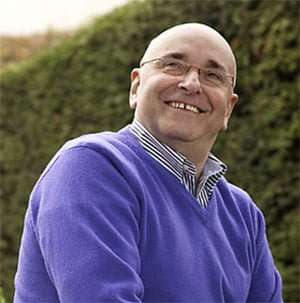 She did say that the first time she heard her own playing on a recording, it was a shock, because she had no idea what it sounded like, the violin being so close under her ears. She told us about her respectful attitude to a composer’s score – not always borne out by the recorded evidence – and said her playing of Bach was never good enough to satisfy her. She gave a strong plug for British violin concertos, especially by Elgar and Britten, and made sensible comments about portamento. She looked fabulous and showed that she still has a sense of humour. We all laughed indulgently on each occasion when she told the same Klemperer anecdote three times; and we went along with her feigned shock when Cowan asked her to play. Why she should be surprised, when he had carried her violin on for her at the start, and when three pieces were listed in the programme, I do not know.

I was the only one to ask a question from the audience. I wanted to know whether she had any favourites among her various violins. She said, to general laughter, that a violin was “a piece of wood” and that it was what one did with it that mattered. She had quite a good anecdote about going to Australia with a replacement violin, because her Strad had developed a crack, and no one knowing the difference. Ida Haendel has a ‘new’ recording out: pieces by Saint-Saëns, Lalo, Brahms, Wieniawski, Bach, Sarasate and Mozart, recorded in a Tokyo studio in 2008 (RCA 88883744502). I have not yet had time to listen to it, but I am perfectly prepared for it to be the best 84-year-old violin playing I have heard.