The influence of J. S. Bach on Brazilian classical music is not immediately obvious, yet the debt acknowledged to him by Heitor Villa-Lobos in his series of Bachianas Brasileiras illustrates the flexibility of the German composer’s legacy. 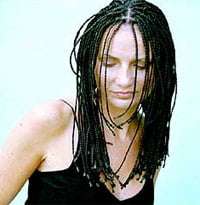 In this cleverly devised programme these two strands of music were juxtaposed, Joanna MacGregor reaffirming the love she has for the music of Brazil, both popular and classical. With the help of percussionist Adriano Adewale she illustrated not just the influence of Bach on Brazilian music, but its close relationship with the music of Africa, made especially clear in three pieces written by the percussionist himself. As a result it was emphatically the Brazilian music that was ringing in your correspondent’s ears by the end.

We began with Bach, and a rather imposing reading of the first published keyboard concerto, the composer’s most substantial for harpsichord and strings. This exposed a problem with the players’ placement on the elevated platform, with half of the audience unable to see the violas and some of the cellos, which were obscured by the piano. This affected their ability to project, and as a result the piano took emphatic domination of the balance, in the faster music especially. That said MacGregor was sensitive in her dialogue with the strings, Bach’s motifs easy to follow. In the D minor Concerto the approach was much more successful, with a particularly beautiful Adagio, MacGregor neither rushing nor over-ornamenting the melody.

The ninth of Villa-Lobos’s Bachianas Brasileiras collection is perhaps his most successful in terms of reverence to Bach and his mastery of counterpoint. Initially written for chorus but considered too difficult at the time, it was performed here by strings, led decisively by Jacqueline Shave. The eleven-beat Fugue, divided into units of five and six beats in the bar, was firmly pointed and rhythmically extremely solid, the faster music rushing over the slower, sustained notes from the Prelude to create a burst of kinetic energy.

Egberto Gismonti’s pieces were also clearly in thrall to Bach, and here there was a sense of real enjoyment from MacGregor as she led a propulsive account of Forrobodo. This touched on aspects of minimalism, with the music of Michael Nyman coming to mind on occasion, though Frevo was more explicitly jazzy, its syncopations persuasively performed.

The second half opened with Bach, MacGregor introducing us graciously to Adriano Adewale, whose three pieces kicked off an entertaining and revealing section of Brazilian folk- and pop-music. With piano and percussion joined by violin (Shave), viola (not credited) and double bass (Stephen Williams) the balance was nicely tuned, the percussion featuring bongos, a traditional kit and hand-held drums. Especially atmospheric was the second piece, in which Adewale demonstrated his mastery of the berimbau. This striking instrument was also used in the first of four songs arranged by MacGregor for piano, percussion and strings, Baden Powell’s ‘Lamento de Exu’ beautifully controlled and rendered. The songs were by turns energetic and soulful, with Caroline Dearnley contributing a sensitive cello solo in the third, while the finale was a rustic off-beat dance, Macgregor making the most of the syncopated rhythms.