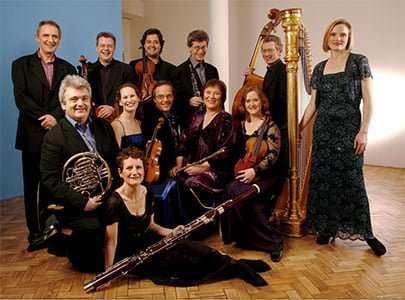 Flanked by marble busts of George III and George IV by Sir Francis Chandrey, the members of Nash Ensemble took their seats in Goldsmiths’ Hall, positioned in front of the north wall embrasure of the Livery Hall, with all its ceremonial plate on display. On a humid evening it was perhaps appropriate they should begin with the heat-soaked music of Darius Milhaud, arranged by the composer for piano quintet.

Perhaps inevitably the extra colour afforded by woodwind and brass, especially the alto saxophone, is missed in this arrangement. However the Nash Ensemble shaded the sombre ‘Overture’ beautifully, working from a very slow beginning that perhaps portrayed the emptiness before creation – though in a very different way to Haydn! While the colour and shade was nicely done the opening of the fugal section ‘The Chaos before Creation’ was tentative and lacked the jazzy swing it needs. From there the performance grew in stature, the players enjoying Milhaud’s sleights of rhythm, his rich harmonies and the spicy oriental melodies that make this ballet-music so enjoyable.

Ravel’s sole Piano Trio is an altogether more serious and sombre work, given extra pertinence in this performance by its proximity to the First World War, the centenary of whose beginning falls this year. The third-movement passacaglia was the emotional centre, with Tim Horton sensitive to the bare bones of the left-hand piano melody, while Rebecca Gilliver’s contribution low on the cello also chilled. Gilliver and Marianne Thorsen were superb when playing in unison in the faster movements, as though singing Ravel’s melodies in one soft breath, while Horton played with commendable detail and attractive phrasing, despite the extraneous sounds from the sustaining pedal as it touched the raised platform on which the performers sat. The players’ virtuosity in the scherzo was without question, their technical assurance most impressive at a daringly fast tempo, while the dappled shades of the first movement and opening of the finale were beautifully rendered.

The choice of César Franck’s Piano Quintet for the second half was a good one, the piece and performance complementing the grand setting. The strings were superb, Thorsen and Laura Samuel closely aligned and faultless in both tone and intonation. Lawrence Power’s viola added crucial depth to the sound, underpinned by Gilliver’s woody cello. The close acoustic suited the frequent instances of unison playing and intensified the dotted rhythms of the arresting opening statement, while Horton’s careful use of the sustaining pedal and sensitive dynamic choices meant that piano and strings were ideally balanced. This was a thrilling performance, the energy bubbling under the surface in moments of tension at the start of the finale but released in a torrent as the main theme arrived.

It was however the elusive and improvisatory second movement that made the deepest impression, the depth of feeling clear despite the tonal shifts, whose motions were both instinctive and unexpected, the melodies singing out with real beauty. When the main theme from this movement reappeared in the finale from Thorsen’s violin there was a real sense of resolution, enhanced by the emphatic final statement where all five musicians were united.