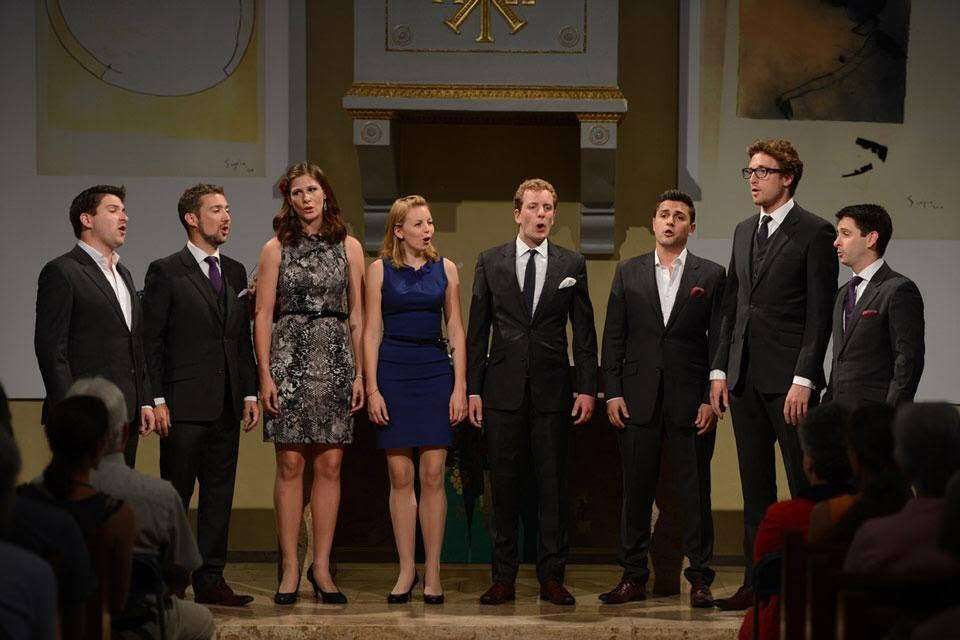 On the eve of its 10th-anniversary, the members of Voces8 chose ‘light’ as their focus. And so, as the lamps of St Bartholomew-the-Great dimmed, this City of London Festival concert began illuminated only by the twilight outside.

Gregorian Chant and Thomas Tallis’s O Nata Lux softly issued from the Lady Chapel out of sight and the attention was drawn to the church itself, all large and warm and old and drowsy with an aroma of sun-baked stone.

Barnaby Smith and Chris Wardle led the Chant, and were so well-blended it was hard to decipher when one or both of them were singing. The Tallis fell simply. The stillness of the delivery and unfussy dissonances were affecting. More Gregorian Chant signalled Voces8’s procession through to the Nave and plain sight. This was coolly orchestrated – William Byrd’s Haec Dies (“This is the day which the Lord hath made: let us be glad and rejoice therein”) now rang with a clarity added by proximity, and the lights were brought up to shine their approval. Impressive was the ease about which the consort passed in and out of compound time while remaining absolutely as one. So too were the harmonic shifts which rarely required adjustment – Jim Clements’s close-harmony arrangement of Kate Rusby’s Underneath the Stars particularly showcased this.

John Tavener’s Mother of God, Here I Stand (indulged somewhat in what is already indulgent music) and Henry Walford Davies’s God Be In My Head both played to the ensemble’s strengths. Rolling phrases were controlled to their conclusions without any starving of the breath – Voces8 do clean-cut homogeny impeccably well.

Such discipline leaves little room for the impassioned. Duly, Felix Mendelssohn’s Denn er hat seinen Engeln, and indeed all of the German works felt displaced of their guttural and subliminal roots and Charles Villiers Stanford’s extraordinary climax in Beati Quorum Via could not unleash. Robert Lucas Pearsall’s Lay a Garland was more 19th-century-restrained than 16th-century madrigalian – the work is neo-Renaissance written in 1840. “Hearse”, “dismal”, “died” and “firm” could all have done with more attention, as could “sometimes it causes me to tremble” in Bob Chilcott’s Were You There which was repeatedly neatened-off with a ritardando-diminuendo, presented with an air of the painted-on and ready-made.

Exceptions were David Blackwell’s arrangement of Steal Away thanks to the towering fervour of Dingle Yandell, and Ubi Caritas by contemporary Norwegian composer Ola Gjeilo. Voces8 spat, breathed, oozed, and were sibilant in a manner different from the Latin they gave to the Tallis and the Byrd.

There was also spontaneity about Benjamin Britten’s Hymn to St Cecilia. Programming this was an odd decision, though, as it is scored for full choir and with good reason – the thing is fiendish hard work. With only eight performers, phrases had to be cut short to allow breaths, solo passages lost their intimacy, and the tuning was wayward for the first and only time. That said, it was heady and humorous and weird, and in total understanding of Britten’s music and W. H. Auden’s words.

The 10 o’clock bells summoned the recital to an end, and St Bart’s was once again lit solely by the dusky dark outside. Voces8’s re-working of the Gregorian chant ‘Salve Regina’ served the singers’ recession back to the Lady Chapel where Gregorio Allegri’s Miserere Mei was performed. Special mention goes to Andrea Haines who transcended with treble-like curiosity to that infamous recurring top C. Like the Britten, the Miserere is ordinarily sung by a larger choir. The final coming together of semi-chorus and choir at “Tunc acceptabis sacrificium iustitiae” (Then you accept the sacrifices of righteousness) went by absent of the deep expansion and slowness which might have been afforded by a larger group. Nevertheless Voces8 and St Bartholomew-the-Great together conjured great softness – it ended earthy and sublime.