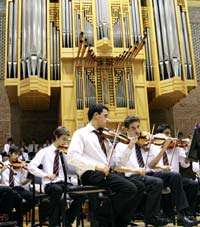 In each of the three terms, the City of London School’s Orchestra holds a concert showcasing the superb musicianship of its boys, and this Summer Concert, held in the School’s Great Hall (with a magnificent organ overlooking all) did not disappoint. What was on display was a lot of hard work and the highest standards of musical probity. These are not professional musicians and one must approach a concert bearing this in mind; only the Pezzo Elegiaco from Tchaikovsky’s Piano Trio was too ambitious for this occasion.

Copland’s An Outdoor Overture was written for a High School orchestra, and received its premiere in December 1938. It is an optimistic work that finds a natural appeal with youth. Whilst initially wayward, the playing gelled and became energised, firmly anchored by Paul Harrison, and produced stirring ensemble playing with the several treacherous trumpet contributions expertly handled.

A much-reduced orchestra was used for the Haydn concerto. Three of his for violin survive (the second is lost) and they are no easy ride for the soloist. Their use of a relatively high register, chains of dotted notes, double stopping and ornamental figurations were all designed to showcase the considerable virtuosity of Luigi Tomasini, the principal violin in Haydn’s orchestra. Maged El Sergani’s playing was full of musical joy and technical brilliance.

The Chamber Choir and four soloists, accompanied by organ, gave vibrancy and mystique to Britten’s “Rejoice in the Lamb”, his 1943 festival cantata. The choir excelled at variations in volume, and were particularly successful in the hushed moments. Tenor Hugh Benson has the ‘Britten sound’ in his voice and treble Harry Bradford was secure in his upper register, with excellent diction, but struggled lower down. The creation of mood was exceptional and the end had a sense of great repose. 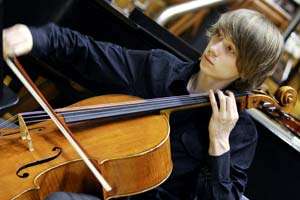 Tchaikovsky’s only Piano Trio was far too an ambitious piece (albeit ‘just’ the first movement was played, the second movement is a Theme and Variations lasting some 30 minutes) for players who, although displaying undoubted talent, need to explore other repertoire that suits their development. It was brave to play this and only occasionally did it pay off. Samuel Kim is a very good pianist but he was detached from the music and too forceful, stamping on the heart of the music as espoused by the soulful musicianship of cellist Guy Hindley. Only when the violin and cello came to the fore (or, rather, when the piano was subdued) did the piece display its vivid emotions. 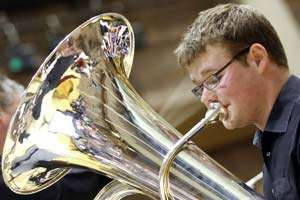 The highlight of the evening was Tom Morley’s playing in Edward Gregson’s Tuba Concerto. Morley is the current Principal Tuba with the National Youth Orchestra of Great Britain, and this was his last concert at CLS. The contrasting themes (lyrical and rhythmic) in the opening movement were expressed well by both orchestra and soloist and the second movement’s brooding opening was well served by the solemnity of the strings. All of this paled when set against a superb and moving crescendo from Morley that heralded the entrance of the eight-part strings in the midst of this central movement. The finale was immediately jovial, with some brilliant and incisive playing from Morley. A fine close, then, to a superb school concert, marked by some fantastic playing.

There is absolutely no reason why music cannot be alive in schools as it is here at CLS. Boys (and girls) get a lot of enjoyment from playing the classical repertoire as it is more demanding and when it works, as here, the rewards are much greater.