Verdi
Simon Boccanegra – Opera in a prologue and three acts to a libretto by Francesco Maria Piave (with additions by Giuseppe Montanelli) after the play by Antonio Garcia Gutiérrez, revised by Arrigo Boito [Sung in Italian with English surtitles] 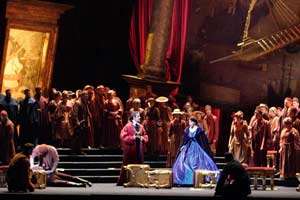 At a distance of over 150 years, it is difficult to believe that “Simon Boccanegra” was not a success when it was first performed at La Fenice in 1857. However, even a popular work such as “La traviata” was not an initial success due to the miscasting of one of the principal parts that went to a singer whose capabilities were not up to performing the role sufficiently well. Verdi withdrew “La traviata” until he could find a more suitable cast. This was not the case however with “Simon Boccanegra” which the composer expected would repeat the success of “Il Trovatore”. Verdi experienced trouble with the libretto, much of which was completed by Giuseppe Montanelli in Paris where Verdi was working at the time without his regular and reliable librettist Francesco Piave. The result did not appeal to the audiences at La Fenice, who found it unnecessarily complicated. 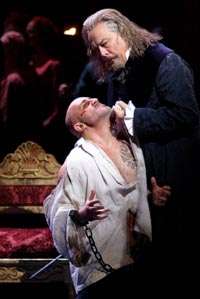 Over twenty years later, at the request of his publisher, Ricordi, Verdi decided to try again with “Boccanegra”. Verdi was about to work with Arrigo Boito on “Otello”, and he did not wish to re-write the whole opera, but instead make relatively minor alterations. Boito’s main contribution was to write a new scene for the first act, the Council Chamber scene. This plus other revisions turned what was considered an impossible work into one of Verdi’s masterpieces.

Although it is still a relative rarity in the opera house and has never been as popular as some of the composer’s other works, it must be counted as one of Verdi’s great contributions to the opera repertoire. It is a difficult piece to stage successfully and many have failed. However, in Ian Judge’s production for The Royal Opera it has met its match. First staged here in 1997, with Plácido Domingo as Adorno, it was originally done in the 1857 version for the Verdi Festival (i.e. without the Council Chamber scene). Since then it has played overseas with, at Domingo’s behest, the inclusion of the Council Chamber scene from the Revised Version. It now receives its premiere in this form at the Royal Opera House. 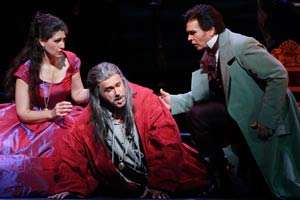 Through clear, unfussy direction and basically one set Ian Judge seems to have made more sense of the opera than most have done. It is a tale of internecine war and a bid for power among opposing groups of patricians in 14th-century Genoa. Boccanegra is a plebeian who is forbidden to marry Maria, daughter of Jacopo Fiesco, but with whom he has had a child. When Maria dies Fiesco swears revenge on Boccanegra, and will only forgive him if he has his granddaughter, who has disappeared, returned to him. In fact the child is discovered many years later as Amelia Grimaldi, the lover of Giuseppe Adorno, whose father was killed by Boccanegra. The interweaving of the characters and the complex plot make for some exciting action which Judge directs with suitable flair.

Rarely has the ROH Orchestra sounded so good. Under John Eliot Gardiner the musicians take Verdi’s great music to heart while the Chorus has also never sung better. It is an absolutely marvellous sound that these forces produce together. It is also rare for a production to gather so many good principal voices at one time. Lucio Gallo is a fine Boccanegra, a singer of terrific power and an actor of much brilliance. His death-scene, in which he almost resembles a Christ figure, is touching in the extreme. As Amelia Anja Harteros, in her ROH debut, really gives everything she has in a full-throated performance that tingles with excitement. Ferruccio Furlanetto, replacing an indisposed Orlin Anastassov as Fiesco for a couple of performances (he has been at Covent Garden rehearsing for “Don Carlo”) gives a very strong account of Boccanegra’s villainous nemesis. Marcus Haddock as Adorno is similarly impressive.

It may be a hybrid mixture of productions but this “Boccanegra” is one for the history books and it may well turn out to be one of the best-ever productions of this underrated masterpiece.