Mahler
Symphony No.8 (Symphony of a Thousand)

When Gustav Mahler’s premiered his Eighth Symphony in Munich on 12 September 1910, one in the audience was 28-year-old Leopold Stokowski. Soon after named as conductor of the Philadelphia Orchestra, it was he who gave the American premiere of the work in 1916. So great was the demand for tickets that eight public performances (plus a private one only for children) were scheduled, as well as one in New York at the old Metropolitan Opera House. Due to the large forces required, Mahler 8 is rarely heard; following four concerts at its own Kimmel Center, the present-day Philadelphia Orchestra treated New York to this grand work.

Stokowski had amassed 1,068 performers, among them 800 adult choristers and 150 children, a feat which Eschenbach almost rivalled recently at a Paris sports stadium with 800 participants, including 300 children from underprivileged areas of the city. Carnegie Hall, however, even with an extension to the stage, cannot accommodate such forces. Combining three adult choirs and the American Boychoir, 205 choristers were joined by 8 soloists and 122 orchestra-musicians for a total of 335.

From the very opening it was clear though that these forces were adequate for this auditorium, producing a mass of sound which was almost overwhelming at times. Only in the big climaxes towards the ends of each movement was there some strain noticeable due to their relatively modest numbers. One did wish for more boys though. They sang extremely well and valiantly, without scores, but sometimes their small chorus of about 30 simply was not strong enough. Since Carnegie Hall does not have a pipe organ, an electronic instrument unfortunately had to be used, which produced more of an all-obliterating sound than providing a true deep foundation. Another electronic element was a panel suspended over the orchestra, which provided English translations of the Latin and German texts. 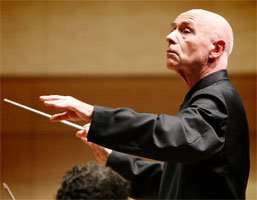 Eschenbach opted for a rather brisk, energetic overall tempo for the ‘Veni, Creator Spiritus’, honoring Mahler’s marking of Allegro impetuoso. Impetuous it was, but less than grandiose or hymn-like. He often has a tendency to over-emphasize composers’ tempo modifications, and this became more apparent and problematic in Part II, which needs very fine calibration of the various shifts in expression and moods. Lack of insight into these aspects turned out to be a disappointment. As beautiful and refined as the playing of the Philadelphia Orchestra was, one missed character, which can only be imparted by the conductor. For instance, the beginning of the ‘Faust’ second movement demands the setting of a mood, an atmosphere, but little of that came across. In addition one sorely missed really soft playing, something an orchestra such as this is capable of producing in many different shades. Eschenbach did not seem to ask for it, nor did he ever get a really hushed sound from the choristers. The ‘Chorus Mysticus’ at the end is marked ppp (pianississimo), “wie ein Hauch” – like a breath. Far from being a heart-stopping moments, it was sung only somewhat soft, without a hint of mystery; it also thus did not properly set up the great last section of the work, which should progress from almost nothing to ecstatic glory.

The soloists ranged from the inadequate – Marisol Montalvo as Mater gloriosa – to the sublime. Vincent Cole was a curious choice for the tenor part. He can produce some very beautiful sounds, but his voice was almost too sweet and uncharacteristic for the important part of Doctor Marianus, and it certainly lacked the power of a Heldentenor one suspects Mahler had in mind. Lyric-baritone Franco Pomponi did well as Pater ecstaticus, and James Morris was stately as Pater profundis. Michaela Kaune and Christine Brewer were slightly shrill on some of their high notes in Part I, but sang beautifully in Part II; Brewer’s Mater Peccatrix was especially gripping, followed by Charlotte Hellekant’s moving Maria Aegyptiaca. Lastly there was Stephanie Blythe, whose voice is simply ravishing; as Mulier samaritana she sang with a rich, warm sound, great style and engagement.