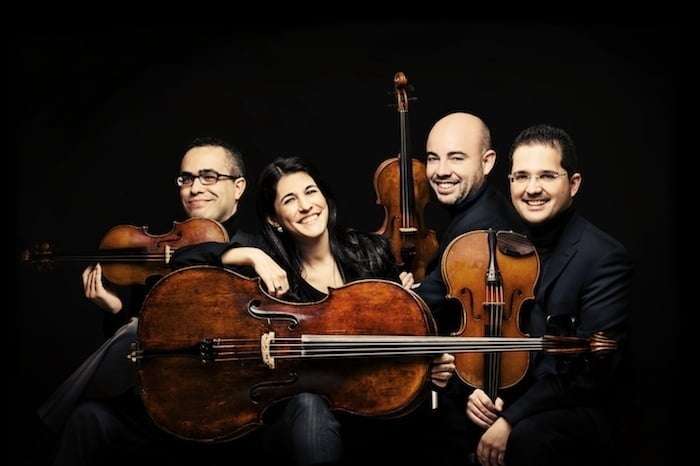 With protesters massing just a few hundred yards away on the Via Laietana, and Cuarteto Quiroga founder Cibrán Serra’s impassioned discourse on music and ethics not the evening’s only political address from the stage of the quintessentially Catalan concert hall, George Crumb was an appropriately polemic composer to provide the second half of this superb recital in Barcelona.

His settings of Lorca might have been almost too appropriate. But the 1969 Black Angels, written in response to the war in Vietnam, was a powerful experience – sometimes terrifying (the groaning viola), sometimes almost jaunty despite the dark theme (‘Sounds of bones and flutes’, for example), often extremely theatrical. Notable in that last respect is the use of wine-glasses, gongs that are both bowed and struck, and the human voice: although whispering and shouting by instrumentalists never quite convinces me, it is undeniably attention-grabbing. There was striking use of lighting for tableau, too, particularly when the audience first see the cello and viola held upside-down.

But if Black Angels can be a little unsubtle occasionally (as with those inverted instruments, or the ever-so-nice cello melody and ethereal bowed glasses in ‘God-music’), it also packs an undoubted emotional punch. Perhaps the most memorable moments are the Dowland quotation in ‘Pavana Lachrymae’ and the ‘Sarabanda de la Muerta Oscura’, which sounds like a quotation but isn’t – plaintive amid the devastation.

The Quiroga musicians had opened with Schubert’s ‘Death and the Maiden’, playing persuasively as a unit, and mostly letting the notes speak for themselves. They drew out much drama and pathos, and even occasionally humour, but were never mannered; their tone could be highly mellifluous, but never indulgent; they weren’t loud but were nevertheless full, sometimes to almost orchestral effect.

A fine illustration of how – musically, at least – the whole can be greater than splendid individual parts … even if that might not have been the most popular point to make on at this time in Barcelona.