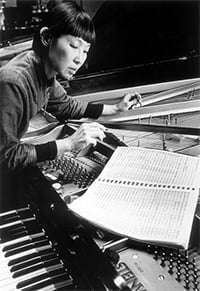 The Barbican Centre’s exhibition The Bride and the Bachelors examines Marcel Duchamp’s American work, which had a significant influence upon John Cage as well as the choreographer Merce Cunningham who collaborated with Cage in Four Walls. This is a dance drama for which he also wrote the enigmatic words of the single vocal movement positioned roughly halfway through its 70-minute duration. Part of the exhibition includes live performances in the Art Gallery amidst the exhibits.

Four Walls was written in 1944 and so is relatively early, predating Cage’s interest in Zen Buddhism and Asian philosophy (and hence his serious consideration of silence, though it presages this) and his exploration of ‘chance’ as an integral structural device in his music. Although he had already begun to cultivate the art of the ‘prepared piano’ he does not feature it in this work. Instead Four Walls uses the piano in a fairly conservative fashion and indeed only the white notes of the keyboard are required.

The eponymous four walls are those of the mind, the music from the time when Cage was preoccupied with the mental world and considered giving up composition in order to undergo psychoanalysis. Cage declared that the piece was “about the disturbed mind”, but it is as much therapy for the disturbed mind as simply a description of it and can be perceived as an act of psychoanalysis – no doubt for Cage as he wrote it, as well as for its audience and soloist (especially on this occasion where no dance was included). With its limited means of expression Four Walls can act as a sort of tabula rasa upon which the mind can settle or in which it may immerse itself, in order to let the subconscious dimension take over and allow suppressed thoughts and experiences to come to the surface.

The music achieves this with the whiteness or spatial void that is opened up by its complete avoidance of chromaticism. However it does not offer an anodyne, chimerical release of unalloyed C major – which would merely add to the occlusion of the conscious – but embodies a more modal and troubled character, tending to hover around a darker minor and Aeolian tonality. In a certain sense this procedure is intended deliberately to be confining, thereby expressing the limitations and barriers the mind encounters while awake. In another sense the effect of enduring the work (which is not meant in any negative sense) is meant to be liberating in allowing the mind to confront directly the things that fill and hamper its otherwise empty space, to try and work through and deal with what it finds there, rather than merely experiencing trauma and suffering vicariously as the more normal act of catharsis would entail. This liberation is effected through the music’s completely diatonic harmonies and owes something to Erik Satie, not only in its modal character but also in the veiled dance rhythms that permeate some of the movements, calling to mind his Gymnopédies. These facets and the thematic repetitions thus employed become hypnotic, allowing the mind to float free from its ordinary preoccupations and begin to access its remoter recesses.

Additionally, although Cage was influenced elsewhere in his output by the Second Viennese School, the music here seems to present a counter to the dodecaphonic method of composition, still running its course in 1944. In this it is perhaps typically American insofar as it rediscovers the most basic and simple means of expression and gives voice to the aforesaid mental recesses, seemingly oblivious of the latest stages in the development of Western Art in the Old World.

Margaret Leng Tan knew Cage and he was her mentor from 1981 until his death in 1992. She is therefore one of the foremost exponents of his music, not least Four Walls, as in 1985 she gave it its first airing since its premiere some forty years earlier, and again played it in the composer’s presence in 1988. Her understanding of the extra-musical content and purpose of this work is, instinctive as demonstrated in this performance. In her account the distinction between execution and interpretation seemed to have been effaced by her poise and steady determination, steering the music without any subjective overloading. Although Duchamp wanted to emphasise the idea over the object in his exhibited art, I cannot help but find that the repetitions of chords, melodies and motifs in Four Walls is supposed to function as an act of intense concentration on the object in order to transcend it and reach the realm of the pure idea. Tan’s refusal to mould the successive repetitions of the music’s elements succeeded in conveying this by precluding any sense of linear or thematic development, as well as inducing a different perception of time from its regular course of passing moments.

Although apparently effortless, Tan exercised considerable restraint and control in her playing to overcome the urge to interpret and vary the phrases and patterns of the score. The result was an uncompromising foray through this musical discourse in which listeners observed themselves as the music ingratiated itself, gradually subsuming the chambers of our minds. Her rendition of the song ‘Sweet love’ towards the end of the first ‘Act’ did the same for the piano as she sang it, amplified, into the instrument’s body creating a slightly distant but ineluctable phenomenon. The husky sound of her voice wafted around the frame, inducing the harmonics of some of the strings to sound, and from there to the audience. Altogether the performance was an unsettling, disturbing experience in the best sense.