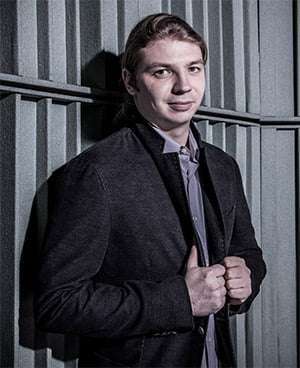 For many, Denis Kozhukhin burst onto the scene recently with his first recording, for Onyx of Prokofiev’s so-called ‘War’ Sonatas (those numbered 6-8), and followed that release with a well-received London concert of the same repertoire. Now, making his debut at Wigmore Hall, he gave a generous recital that opened up further our appreciation of him.

You can be serendipitous with Joseph Haydn’s music in any genre; just pick a work and you’ll most likely choose a winner. Kozhukhin gave a fresh-faced reading of the F major Piano Sonata (Hoboken 23). Crisp and eager, fleet and fastidious, Kozhukhin delighted in the surprises to be found during the witty and urbane first movement, and in the intricate Adagio that follows he brought out its plaintive expression and unexpected modulations. Played with pleasure, the jolly japes of the finale made the world seem a better place. (Kozhukhin’s next Onyx recording is of Haydn Sonatas, being set-down in a few months.) Then with much contrast Kozhukhin found a richly expressive world in César Franck’s masterly Prelude, Chorale and Fugue (Liszt and his cyclical principles in the mix), searching and soulful initially, and also clarifying the denseness of the writing, then delivering raptly the chords and arpeggios of the ‘Chorale’. The ‘Fugue’ was prepared grandly for and exposed for both its minutiae and sweep, somewhat interfered with by someone’s interminable and noisy opening of a sweet-wrapper; nevertheless, Kozhukhin stuck to his guns and created a cumulatively commanding coda. After which Schubert’s first set of Impromptus (the title the whim of his publisher) was given by Kozhukhin with less interpretative leaning than some other pianists. Without underestimating the music’s possibilities he fluently allowed the four pieces to speak for themselves, the melodies just as sublime but without resorting to overburdening the phrases with too much significance.

It is 50 years since Paul Hindemith died but he’s hardly getting a look-in, even in a round-number anniversary year. Such a shame, he’s a terrific composer and deserves to come in from the cold. In 1936 he was particularly prolific, writing a Piano Sonata, then deciding to write two more. The last of these is in four movements, lasts around 20 minutes, and is full of good things. Kozhukhin gave a revealing outing for it. The opening is engagingly folksy, the harmony easily identifiable as Hindemithian, as throughout. The first movement builds inexorably and is followed by a scintillating scherzo, a furioso flurry of notes! The Sonata is without a slow movement, for the next is marked Mässig schnell and gives a sneak preview of the fugue subject that will re-appear in the finale, the most formal and rigorous of the four. It was good to hear this work and to enjoy Kozhukhin’s commitment to it. So too the pianist’s way with the Fantasies (three Capriccios and four Intermezzos) that make up Brahms’s Opus 116; whether mightily heroic, tenderly personal or powerfully passionate, Kozhukhin had the measure of chordal cloudbursts and the most intimate expression.

In reviewing the Onyx Prokofiev release, I suggested that “it may well be that Denis Kozhukhin (born 1986 in Nizhny Novgorod) can be considered as the leader of the pack of Russian pianists currently under forty.” This Wigmore recital more than confirmed this. He may not have filled every seat on this occasion although – have I got news for you – Ian Hislop was one that came along, and Kozhukhin will surely become a favourite at this venue. He wasn’t done though and gave us a hat-trick of encores: Gluck’s ‘Dance of the Blessed Spirits’ (presumably in Sgambati’s arrangement) – that suggested the Elysian Fields, but a punter clapped too soon into the still-sounding lingering final chord – then a transporting J. S. Bach Chorale Prelude (maybe filled-out with a bit of help from Busoni) and ultimately an Etude by Scriabin, the only time this evening that Kozhukhin bared his Russian soul through the music of a fellow-countryman.