This Detroit Symphony concert, a webcast courtesy of the Al Glancy Control Room, paid tribute to its eponymous and recently deceased benefactor. Mr Glancy passed away on January 10 at the age of eighty.

The DSO shared this statement: “The DSO is greatly saddened by the death of Chairman Emeritus Alfred R. Glancy III. Al joined the DSO board of directors in 1974, serving for an incredible 40 years including six as its chairman (1992 – 1998). During his tenure as chairman, Al was a major factor in holding the organization together following a huge loss of state funding in the early ‘90s, and he later led the board during the launch of the Orchestra Place development project in 1996, which began a period of much-needed revitalization in the area surrounding Orchestra Hall. A generous, passionate, and action-oriented donor, Al helped all of us get our jobs done, both on stage and off, from box office and maintenance staff to our musicians. As a great believer in bringing the DSO to international audiences, he enthusiastically supported touring during his time on the board and was part of the 1998 European tour led by then music director Neeme Järvi. More recently, Al provided funding for the DSO to upgrade the technology of its new global webcast series, Live from Orchestra Hall, and purchase remote-controlled robotic cameras. In 2014, his giving allowed the DSO to launch a reserve fund designed to address the ongoing capital needs of the orchestra. Since then the Alfred R. Glancy III Capital Reserve and Technology Fund has supported a new phone system, traffic studies pertaining to the QLine, lighting upgrades in Orchestra Hall, stage floor repair and replacement, and webcast control room upgrades. In recognition for his support of its webcasts, the DSO named the control room in his honor. His commitment to the orchestra was previously recognized in 2002 when the DSO permanently named the Ruth Roby and Alfred R. Glancy III Principal Percussion Chair, currently held by Joseph Becker. The DSO sends its condolences to Al’s entire family. He will be missed.” 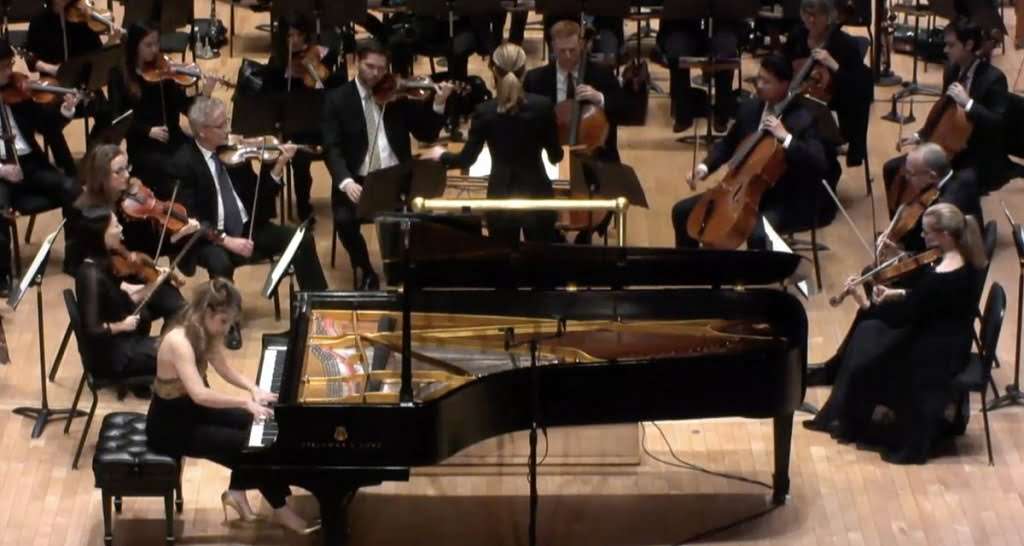 In Orchestra Hall, Lise de la Salle and Karina Canellakis (conducting gracefully and with accommodation) essayed a malleable account of Robert Schumann’s Piano Concerto. De la Salle made a confident first entry, there was expressive woodwind-playing, as throughout, in conversation, and a reserved, slower response from the pianist, a sign of things to come in terms of episodic division, underlining the original Fantasia conception of the first movement, although the music always rippled with romance, and with plenty of dreamy reflection, countered by fiery impetuosity, if avoiding accusations of mannerisms; indeed, ebbs, flows and changes of temperament had been thought-though and were encapsulated in the cadenza, ruminative and blossoming, and then rounded with a pointed and perky coda during which de la Salle made quite a lot of left-hand detail. The second movement, time-taken and tender, offered breathing space and cello-glow, and gentle was the approach to the Finale, which was given a spring in its step, taken in one breath, vital and irrepressible, although a few orchestral aspects were lost to pianistic emphases. Applause faded curiously quickly but was last-second revived for an encore, certainly Bach transcribed by Wilhelm Kempff (she said), with the feel of a Siciliano; coughers aside, the room was stilled, balm to the ear and beyond.

Shostakovich 8 dates from 1943 when World War Two was ablaze, mirrored in music that laments and erupts. Canellakis ensured a unanimous and intense lower-string start, then played the long game with the expansive first movement with well-made transitions, attentive to dynamics, timbre and atmosphere, securing the music’s icy expressions, ominous soundings and threatening militaristic build-ups, the latter discharging painful dissonance, merciless here, and to lethal power, to which a lone cor anglais contemplates (maybe) the savagery of conflict. This was notably brought off, the wholeness of the music’s span, the divergences within, the commitment of the DSO. Intriguingly, the gravity of the music-making didn’t quite match the timing; twenty-three is at least a few minutes quicker than the average (Svetlanov got to twenty-eight with the LSO many moons ago) but never came across as precipitate.

There follow two Scherzos, Canellakis moved the first along, emphasising its spikiness and unrelenting nature, while the second needs to be forceful and precise – both boxes were ticked – and requires a trumpeter like Hunter Eberly who can rip though all the notes to conjure a Soviet-style tone (think Mravinsky’s Leningrad Philharmonic) and flag-waving march-past … from here, fuelled by battering-ram timpani, the only place to go is to return to the climactic assault that crowns the first movement and then descend to the deep-earth expression that informs the almost-static, emotionally introverted, fourth movement. From there to the Finale offers some seeds of recovery, optimism – built indivisibly by Canellakis, via further upheaval – yet the coda is uneasy about what the future holds, the light no more than dusky, and a long closing silence was significant. This was a singularly impressive and truth-telling account, relayed in very good sound, suitably so in memory of Al Glancy.