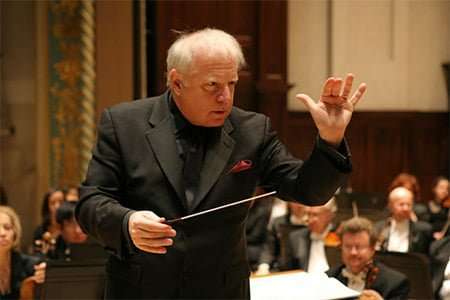 Another date in Detroit, this was a morning concert there that opened with an in memoriam addition to the programme. Al Score, a violinist in the DSO for 53 years, passed away a month ago while still affiliated to the Orchestra. Leonard Slatkin, music director of the DSO, made a touching spoken introduction to cue a tender and gentle rendition of the ‘Air’ (corruptly if popularly known as “Air on the G String”) from one of J. S. Bach’s Orchestral Suites. It was beautifully realised, with feeling and refinement, and made a heartfelt tribute by the DSO string-players to one of their own and with Mr Score’s widow in the audience.

Maybe silence would have been the best response to such intimate music-making, a time to reflect before the new work (the DSO personnel required for it already on the platform). Missy Mazzoli’s River Rouge Transfiguration is a DSO commission following her receiving its Lebenbom Award (strictly for women composers, it seems!). River Rouge Transfiguration immediately engaged in its colours and impression, and then with a well-timed gathering of tension and burgeoning expression. Changes of character retained one’s interest, although some passages meandered for all that this score plays for but nine minutes. John Adams seems to have been an influence, and the work’s abrupt stopping was a surprise not entirely convincing on a first hearing. 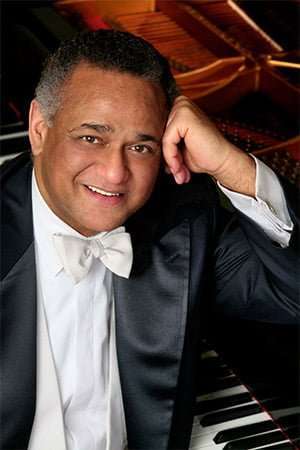 André Watts (born 1946) first played with the DSO 44 years ago. Lost to London these days it seems, it was good to catch Watts via webcast technology. New York-born Edward MacDowell (1860-1908) is probably best-known for ‘To a Wild Rose’ (from the piano suite, Woodland Sketches). His Piano Concerto No.2 (1890) made a nice change from the ‘usual suspects’ among romantic piano concertos, its three-movement design – slow-scherzo-grand finale – possibly modelled (if with different moods) on another Piano Concerto No.2, Saint-Saëns’s from thirty years earlier. From a dreamy orchestral opening comes a majestic entrance from the pianist, played with relish and belief by Watts, reverie becoming passion. Watts gave splendid advocacy to this enjoyable music, musicianship and virtuosity literally hand in hand. The second movement scintillated with its powerful strides. The Allegro finale begins with a slow introduction and then bustles into material both playful and triumphant. André Watts gave a consummate performance.

After the interval, the DSO brass imposed the ‘fate’ motif that opens Tchaikovsky’s Fourth Symphony. With corporate playing at once finely honed and committed, together with Slatkin’s sinuous deliberation of the music, this was a searching and spacious account of the first movement, one of Tchaikovsky’s finest achievements, here taken to emotional heights and impassioned rhetoric. The oboe solo that opens the succeeding Andante in modo di canzona was simple but effective, understated if confiding, and at the darker close of this movement a notable bassoon solo caught the ear … then an effective (unmarked) attacca into the pizzicato scherzo, fluffiness usurping melancholy, Slatkin’s hand and baton conjuring rather than directing, with some amusement found in the plucked notes. Rather than crash straight into the finale, often the way, Slatkin inserted a pause of anticipation. Not speedy for the sake of it, rather this was a measured approach to the heavy return of the ‘fate’ motif, and with something saved for an exhilarating ride home. The DSO’s season ended on a high, its peak probably being the performing of all four Charles Ives symphonies given in one concert at Carnegie Hall three weeks previously.