Philip Glass
The Perfect American – opera in two acts with a libretto by Rudy Wurlitzer based on the book by Peter Stephan Jungk [co-commissioned by ENO and the Teatro Real, Madrid: UK premiere; sung in English, with English surtitles] 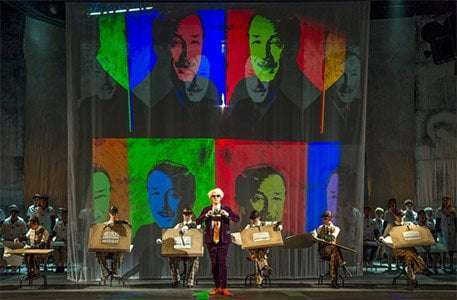 The fourth Philip Glass opera to grace the London Coliseum stage (following Akhnaten, 1984/5 and 1986/7, The Making of the Representative for Planet 8, 1988, and, in 2009, Satyagraha), The Perfect American is the second English National Opera co-commission (after Planet 8), here with Teatro Real, Madrid which hosted the world premiere in January, with the same cast.

Based on Peter Stephan Jungk’s book (originally called The King of America, but published in the United States as The Perfect American) and to a libretto by Rudy Wurlitzer (who was the librettist for Glass’s In the Penal Colony, 2000), Glass has again been inspired by biography – following Einstein on the Beach, Satyagraha and The Voyage (about Christopher Columbus). Following Jungk, the opera imagines the last few months of Walt Disney’s life, with a number of flashbacks and nightmares as he lies on a hospital bed dying from lung cancer. In 11 swift-moving scenes, topped and tailed by a prologue and epilogue, a darker side of Disney is revealed, albeit fictionalised.

Disgruntled staff, who had to sign a contract agreeing that anything they did would be regarded as Disney’s own creation (Disney had to be taught to write his distinctive signature, designed by one of the animators), are voiced by a singled, sacked illustrator, William Dantine, although ten actors/dancers, in similarly plaid trousers and visors, are ever-present, with or without “Disney Studio” drawing folders in hand. Disney frets whether he is a man or a company, and he has delusions of grandeur that he should be cryogenically frozen, to return, however far into the future (when a cure is found for his cancer and he can be thawed out), as a messiah. He recounts how more children know who Mickey Mouse and Donald Duck are than Jesus, and – chillingly – he ticks off Abraham Lincoln (in the form of an animatronic model at Disneyland) for giving too much freedom to Afro-Americans (although he doesn’t quite use that term) when he abolished slavery. 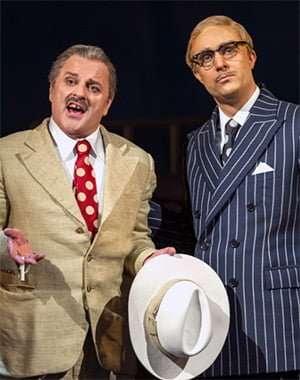 So Disney was a flawed man. We should not be surprised by that, and The Perfect American suggest that the flaws were born out of childish fears, most overtly a fictionalised encounter with an owl, which Disney kills as a kid, and is haunted by ever since. A black-and-white animated sequence of the owl flying ever closer opens the work, and is later embodied by a little girl, curiously trick-or-treating on Disney’s 65th-birthday on 5 December 1966 (a week before he died). The animation is important, because it is one of the glories of the production. Obviously complex, but working seamlessly, there are at times at least three sets of videos being shown – on the screen, at the back of the set, and on silk-like sheets disgorged from two circling rigs, faced by old-style film cameras suspended high above the stage, which can swivel independently of each other or work in tandem. I particularly liked that birthday-party scene where the two gauze-like curtains come together to form a right angle, onto which a sketch of a house is screened, reminding of director Phelim McDermott’s early trademark theatricality – building sets before your very eyes just from sticky tape (70 Hill Lane and a memorable bower for Titania and Bottom in A Midsummer Night’s Dream, for example). 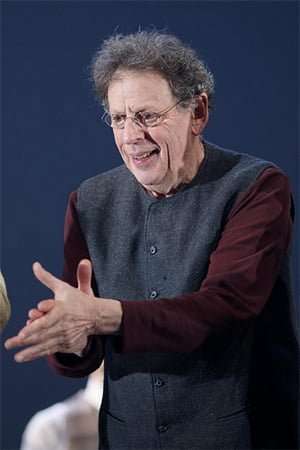 The staging is spectacular, and has a pulse all of its own. The almost ever-present Disney employees, sketching or imitating animals that inspired Disney’s characters are matched by projections of drawings suddenly brought to animated life. There is a wonderful sight-gag to get the ten employees and their chairs off the stage in the first scene of the second Act, which owes much to the inventiveness of the original cartoonists (whether credited by Disney or not). That’s the scene with show-stealing John Easterlin as Andy Warhol who never gets to meet Disney, as his brother Roy bars the way, but we see a backdrop of what Warhol might have done with photos of Disney (as far as I know he didn’t, although he did use images of Mickey Mouse).

And McDermott’s stage presentation, always moving, is matched by an involving new Glass score, which was tremendously well played by the ENO Orchestra under company debutant Gareth Jones. There seems to be a new richness to Glass’s orchestrations, the score teeming with detail. Yes, the minimalist pulses are there, but here they underpin much more overtly lyrical musical lines, that ebb and flow in an impressive sweep.

Glass’s vocal lines are not so distinctive, perhaps hampered by the rather prosaic nature of the libretto, underselling the psychological nuances of Disney’s double-think. And there are no big hits, like ‘Batter My Heart’ in John Adams’s Doctor Atomic. But the performances are strong – led by Christopher Purves as Walt Disney, present virtually throughout, joined by David Soar as Roy, Janis Kelly as the nurse Hazel George (“Snow White”), with Pamela Helen Stephen, Sarah Tynan and Nazan Fikret as respectively Disney’s wife and daughters. There are also two notable double roles – Rosie Lomas as the owl-girl Lucy and child cancer sufferer Josh, who brings out Walt’s more-appealing child-like self in his last few days, and tall Zachary James who has a quick change at the end of the evening, swapping from dour undertaker back into his Abraham Lincoln garb for the curtain calls; that character ending the first Act as the malfunctioning President.

So, it looks as if ENO has another hit on its hands. The Perfect American may not be the perfect opera but it seems to have found a perfect production. With a new dimension to Glass’s ideas and orchestration and the consistent invention in the animation, that one moment can conjure images of Walt’s beloved steam trains and next the charm of his home town Marceline (on which he modelled, perhaps subconsciously, Disneyland’s main street), this is a show that both entertains and makes you think. And it makes Walt Disney a richer character, for all his defects.