John Adams has never been one to shy away from contentious issues in his stage works, but the angry response directed at him following “The Death of Klinghoffer” seemed to have put him off opera permanently.

Fortunately Adams was not deterred for good. In 2005 “Doctor Atomic”, dealing with J. Robert Oppenhemier and the circumstances surrounding the creation of the first atomic bomb, was premiered in San Francisco. This production is now given its European premiere in Amsterdam, with the original cast.

Anyone familiar with Adams’s work will recognize the style and language, though there is less of the straightforward rhythmic impulse which leads to him being unfairly called a Minimalist and a greater textural richness and melodic inventiveness. He has also learnt from previous experience; the balance between stage and orchestra is much better and the voices are easier to hear than in, say, “Nixon in China”. In interviews, Adams has described Edgard Varèse as his guardian angel on this project and the debt is clear, though Adams’s own voice emerges strongly.

The curtain rises on a bare set with no formal scenery but fifteen narrow columns, which turn out to be moveable, and a reverse silhouette of mountains in the background. Before the orchestra enters, there is a collage of electronic sounds, beginning with white noise and culminating in the sounds of aircraft passing overhead. The orchestral sound is richer and darker than in earlier Adams and used with considerable expressive intensity. 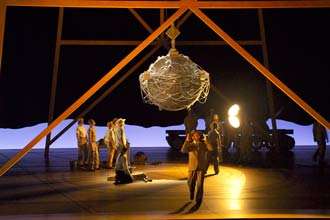 Gerald Finley brings the character of Oppenheimer to life as a tortured man keenly aware of and bravely attempting to manage the many conflicting pressures which the Los Alamos project generated. Pressures like trying to maintain the pitch of concentration and cohesion in a team that has been struggling against great technical odds to achieve the bomb and whose members are now, following the defeat of Germany, far less convinced of the value of a weapon the power of which they are slowly beginning to appreciate. Oppenheimer has accepted that idealism in the face of politics and military determination is no longer enough. His younger colleagues have not yet realised this. At the same time he has to deal with the constant pressure from the army, in the person of General Leslie Groves, to achieve a working weapon in the shortest possible time.

The conflicting strands of Oppenheimer’s team are personified in Edward Teller, a brilliant, driven, man, not given to team work and obsessed with the bomb, and Robert Wilson, the youngest team leader, who is as much concerned with the moral and social implications of the “Gadget” (the code word for the weapon). Teller appears as an inflexible figure, scornful of any interruption to progress, whereas Wilson is an anxious man, eager to present his petition urging a delay to the bomb’s production until Japan has been give a full opportunity to surrender and determined that it should be used first on a non-populated target. Oppenheimer already knows that civilian targets have been selected and reads out the list of cities, culminating in the name Hiroshima.

As the debate rages, Adams’s music surges and flows, characteristic high brass-writing and complex percussion appearing in passages of extreme tension and pulling back for moments of stillness. 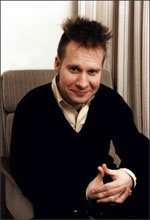 Sellars’s production is very busy. The chorus moves swiftly across the stage, singly or in groups, dressed as workers, soldiers, military, medical and civilian personnel of the camp; props – work-benches and the like – appear and disappear as required. There is a group of eight dancers who have a graceful contribution throughout, but who don’t seem to be completely relevant to the plot or other characters.

For the second scene (Oppenheimer and his wife at home) the set shrinks to a pool of light and the couple on their bed, Oppenheimer reading reports and Kitty increasingly frustrated at her inability to puncture her husband’s preoccupation. He eventually responds with words from Baudelaire, set to music of great richness and ardor, and the couple are transported for a few moments.

The appearance of the bomb itself (an ominous sphere covered in cables) in the third scene is chilling, even sixty years after the event.

The weather at Los Alamos in those final hours was extreme, thunderstorms lashing the test site, and there were fears that a lightning strike could detonate the bomb without warning. Even in a controlled detonation, high winds could spread radioactivity across a huge range. Frank Hubbard the meteorologist, torn between military duty and inner pragmatism, warns General Groves that any test would be “a blunder of the first magnitude” while Captain Nolan of the Army Medical Corps raises the spectre of the effects of radiation poisoning. Groves’s verbal response to these warnings and to the rising tension among the scientists, for whom any postponement would be psychologically divesting, is to counsel calm and say he will bring order and reason to the situation. But his actions show he is beside himself with anxiety. When Hubbard refuses to forecast the necessary break in the weather, Groves momentarily snaps and threatens to have him shot. Hubbard shrugs his shoulders and stalks off.

At the end of the scene Oppenheimer is left along with his creation and experiences a moment of deep crisis, appearing to be torn between going forward to place his hands on the bomb in an act of communion and being pulled back to voice his doubts to God (in words from John Donne) who might now be the only figure who will listen without demanding. Eventually Oppenheimer goes towards the bomb and the Act ends in sudden darkness.

The opening scene of Act Two has already been played in London as “Easter Eve”, Kitty Oppenheimer’s meditation at two in the morning of the test itself, watching the light sky two hundred miles from the test site. In context Kitty becomes more like a figure from a Greek Chorus, both part of the action and commentating on it from afar. Removed from the action Kitty can foresee the devastation in a way which the scientists, absorbed in their final tasks, cannot. Kitty’s set, her chair and children’s beds, remain spot-lit on the centre as the remaining action unfolds.

As the hours tick by the personnel at the test-site make their final reparations, Robert Wilson attaches a final measure device in the midst of a rain storm and Hubbard again warns, unheeded, against the folly of testing in the midst of the storm. With no activity left to absorb their energy the scientists fall to speculation about what might happen: whether a chain-reaction might consume the Earth’s atmosphere or whether the yield will actually be far lower than predicted. Oppenheimer is consumed with nervous exhaustion and pessimism. Teller remains bullish, predicting a high yield.

When the final countdown commences all personnel lie on ground covering their eyes and wait. Groves, finally realising the strain the others have been under, wonders whether Oppenheimer will have a nervous breakdown.

The end is very strange, although the final countdown should take forty-five seconds the last few moments are greatly extended, percussion and strings ticking off the moments, until an eerie silence. No production could show anything remotely like that first explosion. Here, there is a sudden dramatic change of light, with the cast facing out and staring wide and wild-eyed into the distance from which the light emanates, before all fades to blackness.

No other composer would have approached this subject, no other could have achieved what Adams has. “Doctor Atomic” is urgently recommended.

English National Opera will stage “Doctor Atomic” in the 2008/09 season, in a new production.