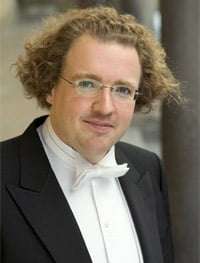 With its current focus on authentic groups, this year’s Edinburgh International Festival has been distinctly low on those large-scale choral blockbusters which used to form such a regular part of the Festival fare, so it was particularly welcome to hear the Royal Scottish National Orchestra and the Edinburgh Festival Chorus tackle Berlioz’s “Roméo et Juliette”, one of those problem children, difficult to bring off successfully but richly rewarding – as here – in the right hands.

The fundamental problem with its seven scenes from Shakespeare is that nearly all the most immediately memorable music lies in the first half. Thereafter although the score contains some of Berlioz’s most remarkable writing – the explosion of delirious happiness in ‘Roméo at the tomb of the Capulets’ is extraordinarily experimental – the work, ending as it does with Friar Laurence’s extended and rather sanctimonious ‘Sermon of Reconciliation’, fails to maintain its initial impetus. It can come off – witness a remarkable performance from Simon Rattle and the Orchestra of the Age of Enlightenment some years ago in the Royal Festival Hall – but it demands some quite exceptional pleading from all concerned.

And this it certainly got from Stéphane Denève and the RSNO who gave a superb account of the orchestral movements. Particularly appealing was the way in which – with plangent oboist Emmanuel Laville and Katherine Bryan the subtle flautist – the playing brought us so close to the timbres and orchestral perspectives evoked by the best ‘authentic’ groups whilst at the same time giving us the full power of a modern orchestra. With Denève at the helm the RSNO in all its departments now regularly plays at a level not heard since I first started attending concerts 50 years ago – mellow trombones, secure horns and a string section (antiphonal violins on this occasion) which far from being the orchestra’s weak point, is now one of its glories (the exposed cello descant in ‘Strophes’ was beautifully voiced).

Denève’s way with the score made the most of its joins, maintaining the magic as the brief chorus of Capulet youth recede into the night (a moment sometimes omitted) and the music eases into the breathless ‘Scène d’amour’. Here – and throughout the work – there was an almost classical restraint with understated dynamic levels, a careful focus on balances and an acute ear for the oddities of Berlioz’s orchestration – which was wholly apt. As a consequence one’s attention was fully held even at moments such as the ‘Prologue’ and ‘Strophes’, which can drag, especially by comparison with the tumult and intervention of the Prince which immediately precede it.

Patricia Bardon, the youngest-ever winner of “Cardiff Singer of the World”, made a fine impression in her extended narration with two harps – hers is a luxuriant, creamy voice – and Loic Félix was absolutely riveting in the ‘Scherzetto’, literally vanishing into thin air as he leapt across the orchestra, exiting stage-right as Mab vanishes in a flash as day breaks; one noticed too what an advantage it is to have a native French speaker in this role. Would that one could have been equally enthusiastic about Franz Hawlata, the Bavarian bass, as Friar Laurence; delivering an extended sermon preaching reconciliation is hardly the easiest number and Hawlata would appear to have been a good choice, but this is a role which cries out for the most imposing bass voice, preferably a native French speaker. Hawlata buried his head in the score and sang dutifully but pitch sagged and he failed to dominate. Consequently this final section became the work’s weakest point.

The Edinburgh Festival Chorus made a sterling rather than outstanding contribution, in Part One taking some time to hit stride and in Part Two a far cry from the notable group fashioned by Arthur Oldham in the 1960s. The evening’s real heroes were Denève and the RSNO. Seldom does one hear the totality of Berlioz’s uneven work sustained so effectively, not just the high points but even sections such as the keening lament of Juliet’s Funeral Procession. ‘Queen Mab’ was gossamer light, fantastical with its distant hunting horns and elusive close, and perfectly timed enough to resonate in the mind.