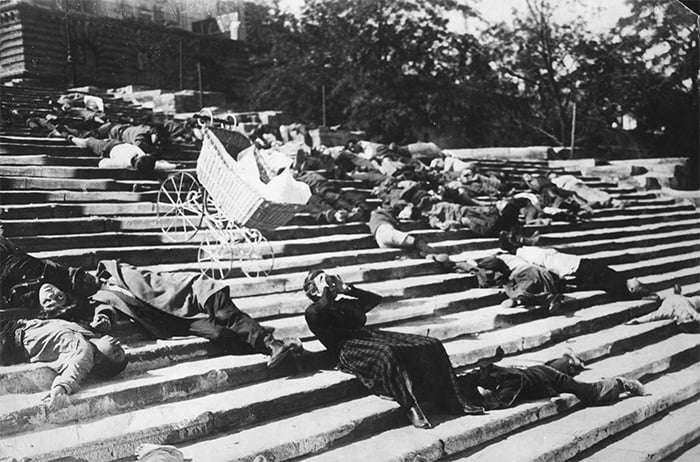 Shostakovich wrote over forty film scores but never provided music to a film by Sergei Eisenstein. This oversight of history has been rectified with Frank Strobel’s arrangement of some of Shostakovich’s Symphonies for Sergei Eisenstein’s most famous film, Battleship Potemkin. Selections from the Fourth, Fifth, Eight, Tenth and Eleventh Symphonies have been pressed into service and the showing of the film in a fine print was accompanied in some style under Vladimir Ashkenazy.

Battleship Potemkin is one of the great masterpieces of Soviet Cinema. It is also one of the most analysed works in film history and a major influence on such as Woody Allen’s Bananas and Christopher Nolan’s Dunkirk. Eisenstein’s film recounts the 1905 mutiny in the Russian navy which was a precursor to the Revolution of 1917. Sailors from the Black Sea Fleet refused to eat the rotten meat provided and faced a firing squad for their insubordination. This led to a wider insurrection and further acts of resistance to the Tsarist regime.

Eisenstein in his revolutionary use of montage, cross-cutting and visual metaphor creates a nervous vibrating rhythm that provides exhilarating cinema even today. In both the mutiny of the sailors and the Odessa Steps sequence a series of shots serve to extend moments of action and give an agonising sense of time standing still as horrendous events unfold. Symbolic images are used as metaphors, such as maggots crawling on meat, a crucifix, pince-nez, and umbrellas to underline political significance. Crowd scenes are brilliantly handled such as when the body of the insurrectionist Vakulinchuk is taken ashore and throngs line the quayside in a long, snake-like procession. The film is also not without its odd moments of grace as when the camera lingers in a homoerotic reverie on the musculature of the bodies of sleeping sailors. The movie ends as the unstoppable battleship comes towards us, shot from below, and bisects the screen to sweep all before it. Whilst it may be historically suspect it is a film which re-wrote the grammar of cinema.

The original score was composed by Edmund Meisel (recently restored and recorded) and there have been numerous versions since then including those by the Pet Shop Boys and Michael Nyman. Eisenstein hoped the score would be re-written every twenty years to make the film relevant to new generations. 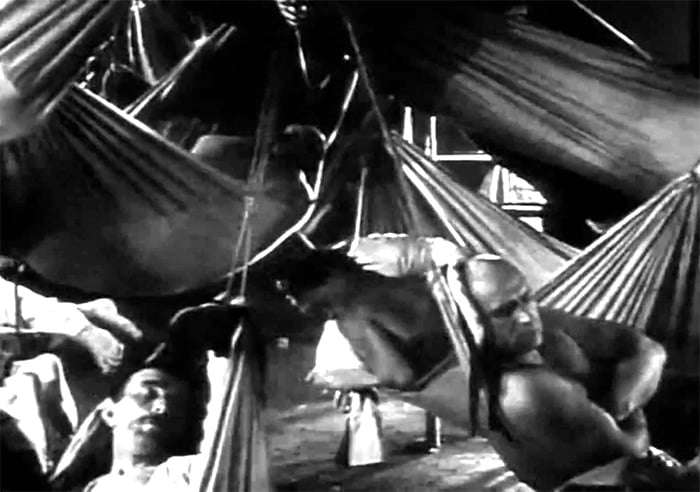 Strobel’s Shostakovich arrangement is practical and effective aside from stark transitions. The programme note could have been much more helpful in identifying what is used. The first movement of the Fourth Symphony heightens the mounting dissatisfaction of the Potemkin crew. The Tenth Symphony’s third movement emphasises the sailors’ foreboding at the impending confrontation with the officers. The Eleventh Symphony features extensively and its second movement is used almost entirely for the Odessa Steps sequence with its violent effects. Strobel is at pains to provide contrast. The use of the Scherzo from the Fifth Symphony offers welcome gaiety as Odessa hails the mutineers. The film’s rhythm and pulse is matched by the music – the driving third movement of the Eighth Symphony gives pace and tension to the Potemkin’s fraught challenge to the naval squadron in Act Five in a sequence which often seems anti-climactic.

There is great intensity to Eisenstein’s images of terrifying violence and the Shostakovich arrangement underlines this. Aside from the odd problem of co-ordination, Ashkenazy drew muscular and detailed playing from the Philharmonia Orchestra. He also gave the music light and shade. There were moments of chilling brilliance as in the muted bugle-like calls before the confrontation on deck.

Eisenstein’s film is a great revolutionary myth crammed with bravura images, dynamic editing and magnificent set-pieces. For once, this was matched by a score of equal power.