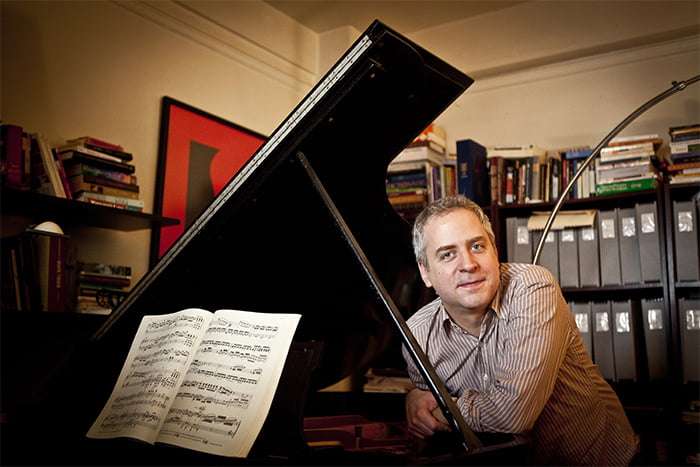 What might have been a Trial (if not of Harmony and Invention) turned out to be an enthralling evening as Jeremy Denk played the final five of Mozart’s eighteen Piano Sonatas … ah, but then there were four. Denk made last-minute changes – he didn’t include K576 or K545 (well, okay, there was one-third of the latter) and added the A-minor Sonata K310. Denk engaged from the off – including during his spoken introduction even if it was unclear (to me at any rate) what he was playing and what he wasn’t, or why, but he seemed to want to contrast “comedy and tragedy” and “life and death”, getting round the last word with humour.

Denk’s was music-making of the highest order, beginning with the drive yet poise with which he essayed K457’s first movement, focussed and fiery, contrasted with a lovingly touched slow movement, a slice of Heaven, and using the full resources of the great-sounding Steinway in the Finale; nothing precious here or anywhere. Throughout Denk was searching the music for its full potential, and in the opening movement of K533/494 it was chiselled rhythms all the way, joy unconfined (intensified by observing the second-half repeat, not necessarily Denk’s stratagem at other points where this is possible); this was brilliant virtuosity serving the music. The Andante emerged as the most eloquent of operatic arias, full of pathos, and the Finale (the K494 part of Köchel’s catalogue) worked its musical-box charm, delicately, beguilingly.

After intermission, K310, in which Denk found more-rounded contours than some other pianists yet without denuding the drama, or rushing through it; clarity was to the fore and there were arresting dynamic contrasts, all intrinsic to the music as well as being proto-Beethovenian. The slow movement was lyrical, sensitive and richly expressed, and the Finale’s shadows and whimsy were interlocked. Following which the capricious opening Allegro of K570 could be described as Haydnesque – and there is no greater compliment – to which the Adagio was a ‘song without words’ and also when the heading to Denk’s programme article – “The allure of the infinite” – seemed particularly apt, and he went on to capture ideally the chirpy and witty nature of the Finale.

Ending the night with the A-minor Rondo K511 came off especially well – private and desolate music, spare in its use of notes, if with shafts of light, but it shares (confides) well and Denk found a gently-dancing quality therein. As you will have surmised, a movement from K545 served as an encore, the central Andante, and the need to do something special with the Alberti bass, achieved … audience spellbound, the importance of silence appreciated, here and elsewhere: no applause at the end of pieces until Denk lowered his arms.

Jeremy Denk was throughout immersed in Mozart’s music and it proved wonderfully absorbing and illuminating for the listener. He continues his Milton Court residency on Sunday October 15 with three refreshingly diverse recitals, beginning at 11 o’clock, and returns on February 27 and March 3.