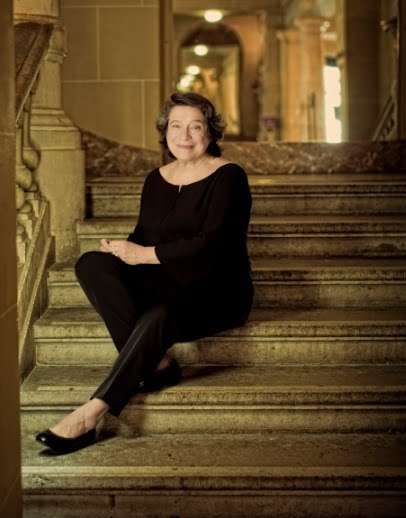 There is an unnerving sense in which Elisabeth Leonskaja seems to look composers straight in the eye, secure in the knowledge of the strange alchemy that by being their servant she is also their master. It has been at least a couple of years since I last heard her, and her presentation – formal and a bit distant, her face radiating intelligence, and an unassuming but direct connection with the audience – hasn’t changed a bit; and although she is now seventy one and in the sixth decade of her performing career, she has a regally animated, ageless style of engagement with the piano and response to the music.

This was immediately obvious in the way she opened Beethoven’s Opus 109 Sonata – it was as though the fast/slow dialogue was already well under way, and all she had to do was turn up the volume. Her shaping of the climax of the opening theme was immensely subtle – it’s a moment that many pianists are tempted to overstretch – and her improvisatory approach strayed attractively between the contrasting ideas so that they seemed to feed on each other. She wheeled out her effortlessly produced big tone and the awesome power and agility of her left hand in the Prestissimo second movement, and, despite a moment of slippage, the Finale lived up to Beethoven’s Gesangvoll direction. She charted the movement’s arc with immaculate clarity, and her way in and out of the trills made the sound glow with energy.

I much admired the opaqueness of tone this discreet colourist created for Brahms’s Opus 116 Fantasies, seven pieces that move from barnstorming anxiety to the falling phrases of melancholy, seeking out the shadows and floating over the bar-lines in the three central ghostly ‘Intermezzos’ that define the mood of the set. There were memories of light and momentum, but regret was uppermost in Leonskaja’s withdrawal into ever greater introspection.

The contrast with Schubert’s D850 Sonata could not have been more emphatic. This wonderful, extrovert virtuoso work is on a par with the ‘Wanderer’ Fantasy (which Leonskaja plays supremely well), and, as well as being a calling-card for young, tyro pianists, it also has barely a trace of the final three Sonatas’ anguish. Leonskaja’s momentum and forthright sense of direction made the first movement sizzle with power, but she surpassed even this in her miraculous reading of the Con moto second movement, superbly lyrical and inventive, and in the distant fanfares of the second section getting to the heart of Germanic longing and romanticism.

What a performance from this great Russian musician, and there was more to come, in her mighty encore, a transcendent vision of Liszt’s Sonetto 104 del Petrarca that summed up the impact of this unforgettable evening.