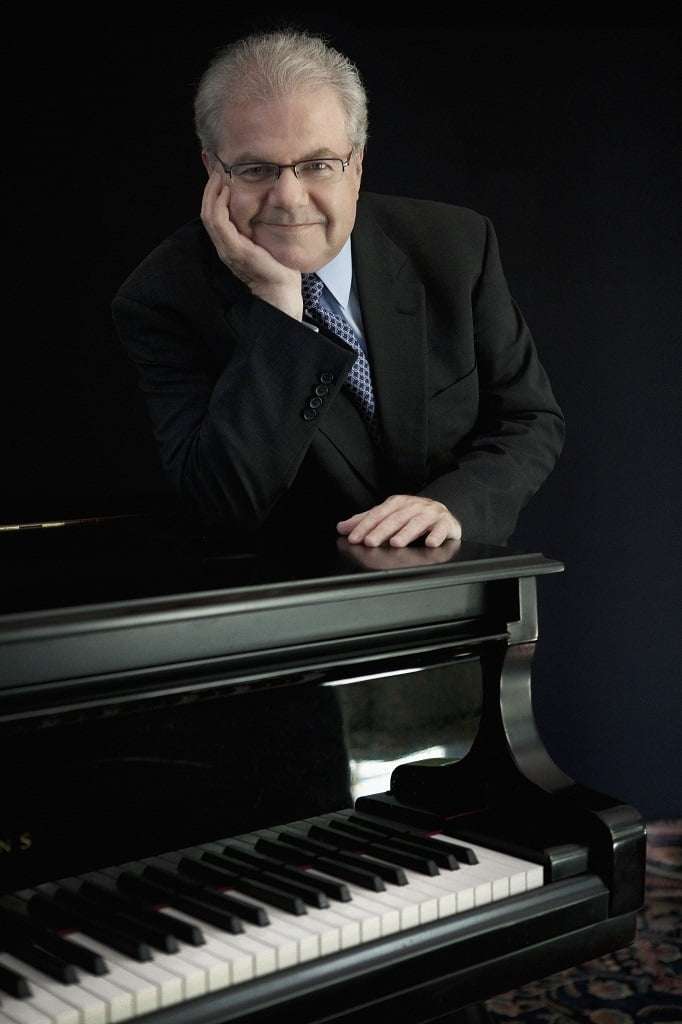 This was a generous, three-part/hour, starting earlier recital, substantially bookended by the Dover Quartet in the splendid Piano Quartet and the (even more magnificent) Piano Quintet. Throughout both opuses, Ax and the Dover personnel were as-one without sacrificing individuality. Ax was the epitome of give and take in what were compelling accounts of these masterworks – the beautiful slow movement alone of the Quartet makes the piece imperishable (otherwise it opens soulfully, moves into an elegant Allegro and ends exuberantly via a gossamer Scherzo, the latter with Felix Mendelssohn looking on, approvingly) – while the Quintet (introducing Bryan Lee) had a fire, eloquence and energy that could only enhance its already-exalted status. Ax and confreres had the four movements respectively propelled yet flexible (viola-player and cellist cooing sweetly to each other), poignant, mercurial, and resolute. The Dover members used iPad scores whereas Ax had paper copy and an attentive page-turner: technology and tradition sharing the platform.

In Dichterliebe – ravishing settings of sixteen poems by Heinrich Heine – Ax and Simon Keenlyside made a dream partnership, the singer vivid in his word-painting, whether outgoing or confiding, and Ax, his instrument now placed at an oblique angle, its lid on the shortest stick, illuminated the piano-writing with superfine touch and impressionistic colours. Singing from memory, Keenlyside was amazing, so deeply involved, creating an opera. He was restless too, literally striding the boards and with hand gestures, yet it all belonged, so too the brow-mopping, and if ‘Ich grolle nicht’ (“I bear no grudge, though my heart is breaking”) was frightening in its intensity and fearsome fortissimos, then ‘Ein Jüngling liebt ein Mädchen’ was a model of mezza voce and tender pianism; and at various points Ax sustained numerous sentiments when there were no vocals, picking up commensurately from the singer. What a visionary Schumann was, for, anticipating this Ax celebration, his Heine cycle ends with a haunting piano postlude, the pianist given the last word, Ax at his most sensitive and inward to send us becalmed into the second interval, much-needed following this striking and glorious performance. When silence became applause, the first thing Keenlyside did (having finished a fair distance from the piano) was to walk straight over to Ax, hand outstretched, and give him a hug.

Ax alone was (nearly) just as winning, opening the evening with the C-major Arabesque (his encore three nights ago at Saffron Hall), which rippled with expression and nicely modulated dynamics. Maybe a little too candid at times, Ax nevertheless delineated clearly the ABACA structure, to which I would add a D, an envoi in which the newly-sounded turn of phrase looks back to Kinderszenen. Ax also relished the numerous contrasts of mood and tempo in the miraculous collection of Fantasy Pieces, eight gems aching with melody, narrative and incident. However, taking into account the forthright Wigmore Steinway and the unencumbered acoustic, there were times when things were too immediate, such as the over-bright ‘Des Abends’ (I) – more midday than evening – and in the surprisingly robust opening of ‘Ende vom Lied’ (VIII), yet its conclusion was the most magical effect of stars peeking through a midnight sky. Did ‘Aufschwung’ (II) levitate enough (no doubting Ax’s virtuosity though)? It was a bit too close to Earth. No qualms though with Ax’s light-emitting dexterity to reveal ‘Traumes Wirren’ (VII). And the set as a whole stirred the emotions and touched the heart, Ax remaining one of the most musicianly of pianists. He doesn’t play Schumann’s Piano Concerto, save the references to it in Christopher Rouse’s Seeing.