Bizet
Carmen – Opera in four Acts to a libretto by Henri Meilhac & Ludovic Halévy based on a novella by Prosper Mérimée [performed in the Critical Edition by Michael Rot, with spoken text – after Meilhac, Halévy & Mérimée – edited by Barrie Kosky; sung in French, with English surtitles] 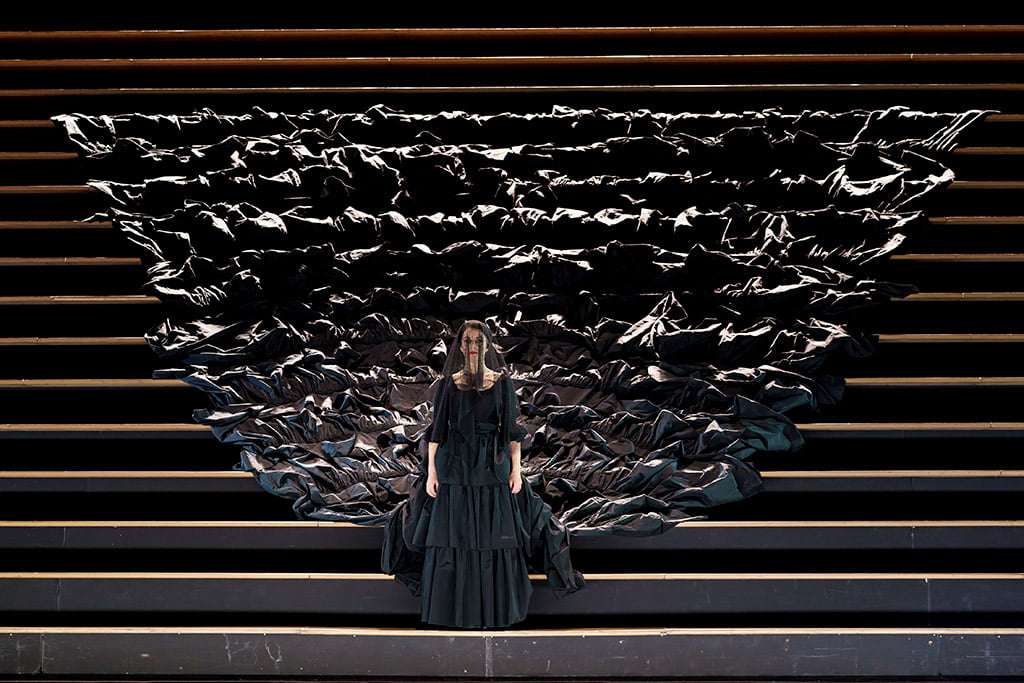 Barrie Kosky’s staging of Carmen originated in Frankfurt in 2016 was first seen at the Royal Opera House in 2018. This second revival has visual strength, imaginative flair and an intoxicating energy underpinned by some very (too) busy choreography. The simple imposing set, beautifully lit, comprises a movable stage-wide and steep staircase that helps project sound, except when singers vocalise from the uppermost steps, and adds texture and complexity to the images, such as Carmen and Don José’s fragile bonds being depicted by rope connecting them from the top and bottom of the stairs.

Carmen’s original, and for its time controversial, 1875 staging was at the Opéra-Comique. Kosky has perhaps taken this as his starting point for there is notable humour to his Carmen, and eschews the now-usual spoken dialogue for a pre-recorded beautifully spoken rather disembodied narration, largely in the persona of Carmen herself. Simultaneously projected on the surtitles it first appears in the midst of the Prelude. It derives from elements of the original novella and dialogue. This it helps establish location (since the sets do not) as well as some background fact – such as Don José’s violent history. However, it also builds a distance between the principals and the audience in terms of dramatic involvement. Some of Bizet’s first compositional thoughts are restored in favour of the familiar later re-writes – and these are of interest for the musically curious; but then, oddly, other musical material is excised totally.

But is it really Bizet’s Carmen? It’s a great story that has seen many theatrical realisations with the use of the composer’s irrepressible music (think Carmen Jones, Matthew Bourne’s Carmen…).

Julia Jones brings out the brilliance of the score vividly, ably abetted by the Orchestra, finding detail that often passes by unnoticed. All the dances have amazing rhythmic precision and drive and expert control of dynamics.

In the end though Carmen is about the voices – Anaïk Morel provides a beautifully sung and communicated account of the title-role, and as she is a French singer it feels absolutely authentic: the voice is agile and alluring and she invests totally in the staging, even with her first appearance in a gorilla suit. Her colourful vocals also blends well with Jacquelyn Stucker’s brilliantly forthright Frasquita and Hongni Wu’s likeable, mettlesome Mercédès.

At this performance Bryan Hymel wasn’t in freest-sounding voice as Don José, but as the dramatic qualities rose he certainly met the challenges impressively. Likewise, Luca Pisaroni’s solid Escamillo, even if he seems self-conscious in his gaudy costume. Incidentally – why is he always wrongly described as a matador? Pisaroni sings the part with point and care, but ultimately the role perhaps requires a voice with a little more bass core to it. Ailyn Perez gives a creamily sung and touchingly engaging Micaëla, managing to surmount the lack of any explanation as to why she is in “the mountains” in Act Three.

The Chorus is on fine fettle, and its sheer verve in the crowd scenes, so too from the children, is thrilling and witty.