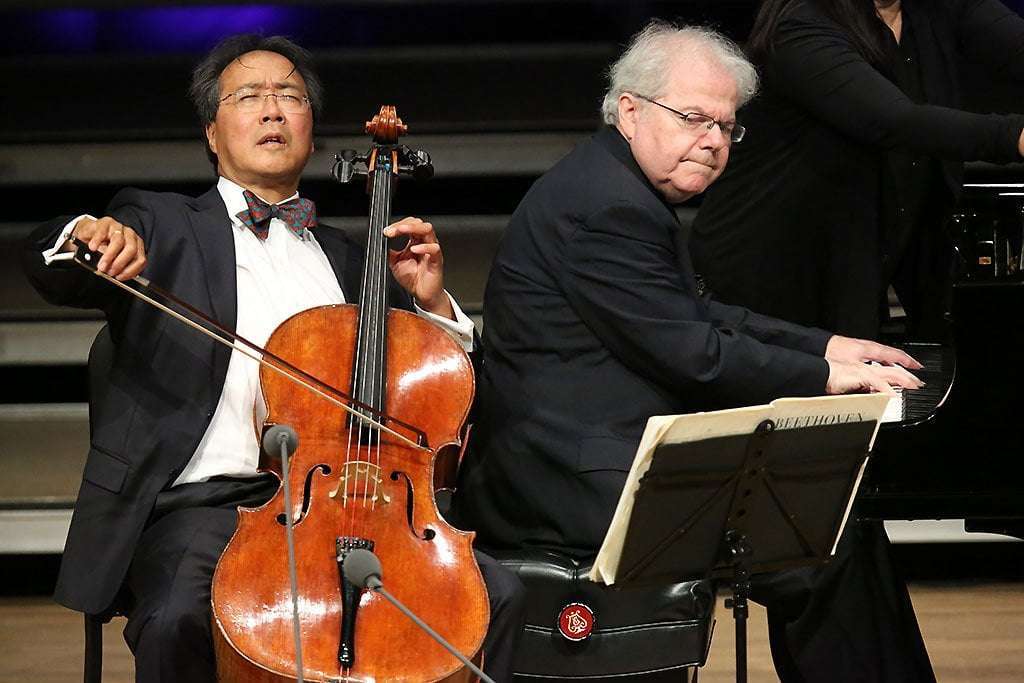 This presentation of Beethoven’s five Sonatas for Piano and Cello by the Ax/Ma duo (which no doubt enjoys having the shortest combined names of its protagonists) was, as Yo-Yo Ma told us, one of only a few such concerts in their many years together. The large audience in the Koussevitzky Shed and on the sprawling Tanglewood lawn demonstrated how powerful a draw these two musicians are, with clapping erupting after almost every movement. Emanuel Ax and Yo-Yo Ma were at the top of their game, and their music-making did not suffer from the large venue.

The cellist was superb down to the least detail, even making something as apparently simple as playing an open string into a notable moment. His amazing technique exploited the entire range of the instrument’s capabilities, from barely caressing to robust. At times, his up-bows resembled darts falling from high above to land perfectly just above the bridge, and physical gestures and facial expressions visibly reflected the emotional content of the music. Ax was far less demonstrative, although equally brilliant, both in melodic lines and in ornamented accompaniments.

Beethoven’s Cello Sonatas span two decades, from 1796 (the Opus 5 pair were the first of their kind) to 1815. Although hearing these Sonatas in chronological order provided some insights into Beethoven’s development, I came away most impressed by how much of what characterized the later works already had strong roots in those of his formative years. 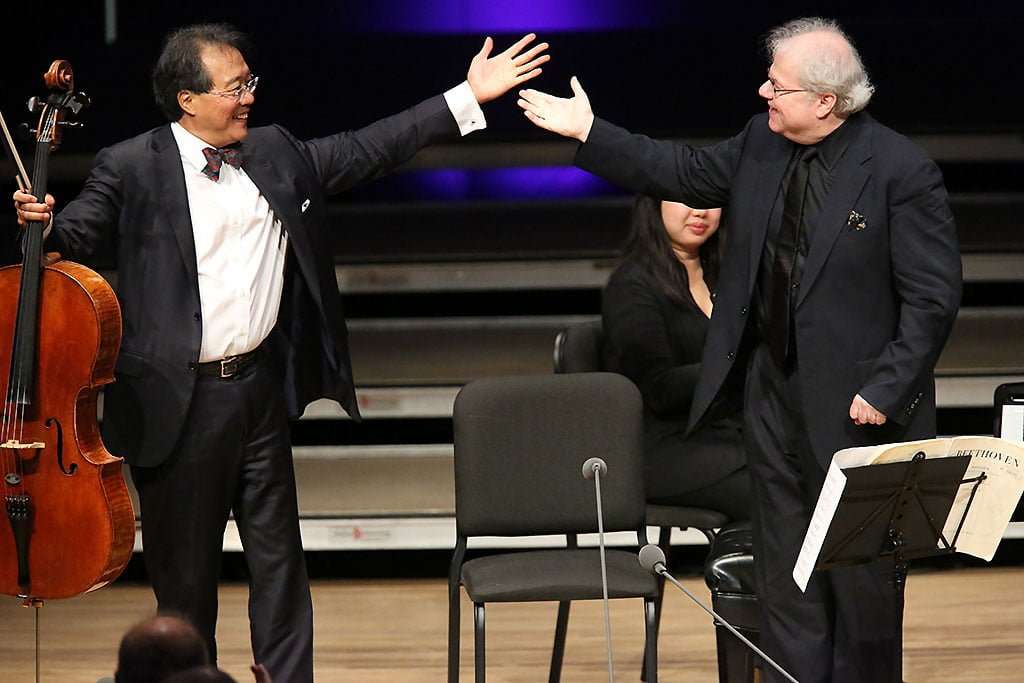 Beethoven’s most significant innovation was elevating the cello’s status to equal partnership with the piano. Ax and Ma complemented each other perfectly. This increased role for the cello was immediately apparent in Ma’s expressive playing in the Adagio introduction to the F-major Sonata, leading up to an Allegro theme first heard on the piano and intensely developed by both musicians. This and the Finale’s equally genial theme are among the loveliest in Beethoven’s early output, Ax’s virtuosity to the fore (with Ma providing pizzicato and droning accompaniments), and in the darker opening movement of the similarly-structured (two-movement) G-minor Sonata, followed by a witty finale that ended with Ma digging powerfully into his instrument for the blazing coda.

Ax and Ma’s expansive reading of Opus 69 brought out its melodic, harmonic and timbral similarities to Beethoven’s contemporaneous String Quartets, having been preceded by the three known as ‘Razumovsky’ and followed by the ‘Harp’. The duo demonstrated an equality of partnership even more firmly established in this work as they constantly echoed one another, threw thematic material back and forth, and interjected virtuoso solo passages. The oddly rhythmic Scherzo was played with gusto, its twice-played Trio rendered dolce, and in the Finale Ma’s gorgeous Adagio cantabile melody unexpectedly gave way to a furiously-paced Allegro with both players flashing their brilliance.

After intermission was the Opus 102 pair. Ma’s beautifully intoned passage opened the C-major Sonata, after which the instruments traded phrases before finally joining together in a dramatic Allegro. This work and its companion in D presage the composer’s ‘late’ period, but are much shorter and terser than any of his final group of String Quartets. Ax and Ma found the poetic content in these intense works, ending with a dazzling rendition of the D-major’s Sonata’s fugal Finale.

As an extra, offered to anyone who is in love or has fallen in love, was a transcription of the sublime Adagio from Brahms’s D-minor Violin Sonata (Opus 108).