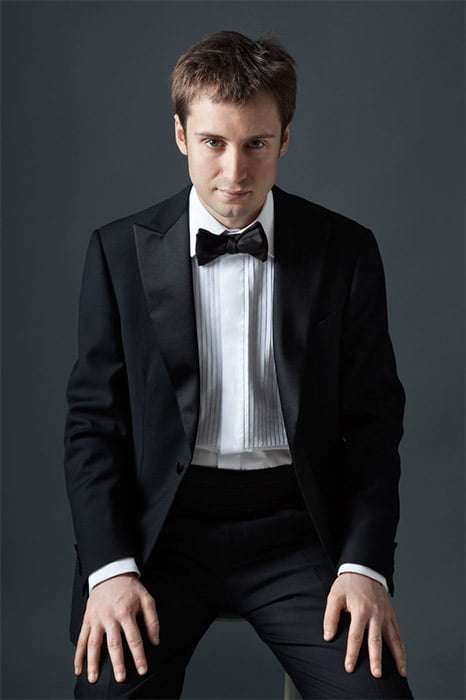 Now thirty, the Italian-Romanian pianist Emanuel Rimoldi studied at the Verdi Conservatory in Milan, followed by five years with Elissò Virsaladze at the Moscow Conservatory. He’s presently studying in Hanover with the Israeli veteran Arie Vardi. A familiar figure on the competition circuit, he won the 2013 Top of the World (beating the recent Brussels winner Lukáš Vondráček) and the 2016 Manhattan International.

The darkness and tragedy of the Mozart only rarely came across – the opening more Allegro than maestoso (though, thankfully, resisting Glenn Gould’s three-minute nonsense), the Andante (without repeat) wanting in devotional simplicity and espressione, the lacrimosa of the major-key episode of the Finale thrown away in haste and abrupt phrasing. Throughout Rimoldi seemed concerned with quasi-Beethovenian muscle and virtuoso showcasing than with detail and the placed shadings and oppositions the composer asks for. Most contentious musically was the jagged handling of the appoggiaturas in the first movement. These were given the Friedrich Gulda/Richard Goode short-long acciaccatura treatment (following the notation of the first edition) in preference to the equal-value realisation (proposed by Mozart in the reprise, left hand) favoured for good reason (clarity, rhetoric) by just about everyone else – from Schnabel to Lipatti, Argerich to Sokolov. One of Schnabel’s witticisms was that “children are given Mozart to play because of the quantity of notes [but] grown-ups avoid him because of the quality of notes.” Rimoldi offered us plenty of quantity and facility but comparatively little quality or penetration. Greater depth, somewhere between the philosophy of Arrau and the culture of Gilels or thoughtfulness of Richter, a sense of life encountered, would not have gone amiss.

Schumann’s Humoreske, that psychologically intricate, kaleidoscopic outpourings of a nicotine-stained furnace of a mind not yet twenty-nine, has defeated the best and confused many. Schumann the dreamer, the poet, the fantasist is a difficult man to conjure with. A couple of generations ago, Kathleen Dale, schooled in the Clara Schumann tradition, imagined the piece to be “a whole portfolio of coloured prints depicting a varied landscape”, the memory refreshed, the narrative steered, through occasional flashbacks. Rimoldi’s approach was increasingly a disparate collection of etchings, the overall impression being one of steeled contrasts – black/white, loud/quiet, sehr langsam/sehr schnell. Outer voices were to be had, balanced middle textures were for the finding. The notes swirled with a mood (passion?) of sorts, but the line between I and We, personal/impersonal, between ‘feeling’ and intensity and ‘doing what you’re supposed to do’, were a grey area generally. Occasionally, a smoky dynamic promised more. The sforzando bells of the ‘Intermezzo’ episode were rigorous, their surrounding semiquavers athletic.

The Verdi-Liszt offering, a late transcription from 1879, and first set of Rachmaninov Preludes variously opened the throttle, let loose the pedal, and exposed a weakness for mid-register melodies that declaimed well enough but at the expense of vocal lyricism or linear flow. At times the effect was almost too contrived, the tunes carefully turned but slightly delayed, the bass lines and harmonies firmly enveloped, the right-hand decorations fluent yet somehow detached, nothing ever quite coming together. Nowhere was this so evident as in the D-major and G-flat Preludes, the expression becoming laboured, the rubato unnatural, the climaxes and tone forced. The grand B-flat was thick and messy, with a limited variety of touch, the C-minor ragged at the edges – whatever would Richter have thought, a mighty exponent of these Romantic heartland jewels? Likewise Gilels of the celebrated G-minor – a patchy performance marred by the oddest agogics. Best overall was the E-flat minor, Rachmaninov’s teasing response to ‘Feux follets’ fifty years on – a cleanly accomplished double-note tour-de-force.

‘October’ from Tchaikovsky’s Seasons, the first of Rimoldi’s two encores, told us nothing we didn’t already know, delayed/delaying chest-voicing to the fore. But Chopin’s posthumously published late C-minor Nocturne, B108, otherwise elegantly purled, surprised for its brisk tempo – more of a ‘cheerful’ Hebraic dance in two than a pensive Andante sostenuto in four.