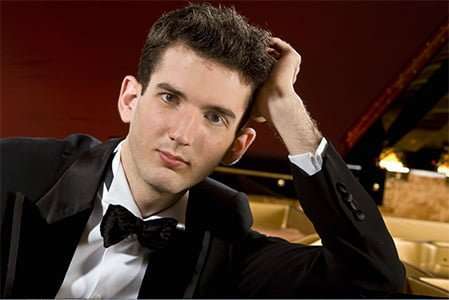 The young (29) French pianist Emmanuel Despax has put himself through quite a London marathon during the past week – a Cadogan Hall concert last Thursday, in which he played three concertos, and then this big recital. Apart from saturation exposure, you wondered what he was trying to prove – and it was a rather poignant moment at the end of his recital, when, despite enthusiastic applause, he begged to be excused giving an encore; he’d had quite a week of it.

Despax left his audience in no doubt as to his technical and interpretative gifts – he was particularly strong in the three Liszt works, which his penetrating imagination brought to vivid life. The heart-on-sleeve grandiloquence of Funérailles was his to command, and his sense of how the piece progresses from hero’s funeral procession, to eulogy and on to apotheosis was projected with a fine appreciation of Liszt’s lofty, rhetorical style, in which the Fazioli piano played no small part, with its floor-trembling, lower-register, organ-like amplitude and rich, subtle middle and upper registers sonorously accommodating some mighty fortissimos.

Despax is a master-colourist with a seriously clued-up ear, and he peeled away layer after layer of tone and timbre to do justice to the signature orchestral style of Liszt’s pianism, an ability he took to genius-like extremes in Bénédiction de Dieu dans la solitude in playing that measured up to the music’s epic, spiritual vision. There was some truly magisterial musicianship at work here, his pacing of the long closing dissolve faultless and Liszt’s prodigal pianistic effects seeming to be lit from within. As with all the best Liszt pianists, you got the feeling that Despax was not so much playing the music as directing it, an approach that worked brilliantly in the Ballade, the clarity of his finger work and of his thoroughly prepared overview defining its wild drama with no loss of spontaneity and distinguished by full-blooded, expressive generosity.

Despax’s identification with the more elusive, interior world of Chopin’s Opus 27 Nocturnes was just as persuasive, and his recognition of how the music’s structure and decoration are inseparable gave rise to playing of exceptional detail and insight. I was rather disappointed that he didn’t play the Prokofiev Romeo and Juliet pieces, as originally programmed, but the early Fourth Piano Sonata showed off the muscular authority of Despax’s technique to great advantage; he played up to the music’s sharply drawn characterisation with mercurial swerves of mood, and he was at his expressive, romantic best in the gathering ascent of the slow movement.