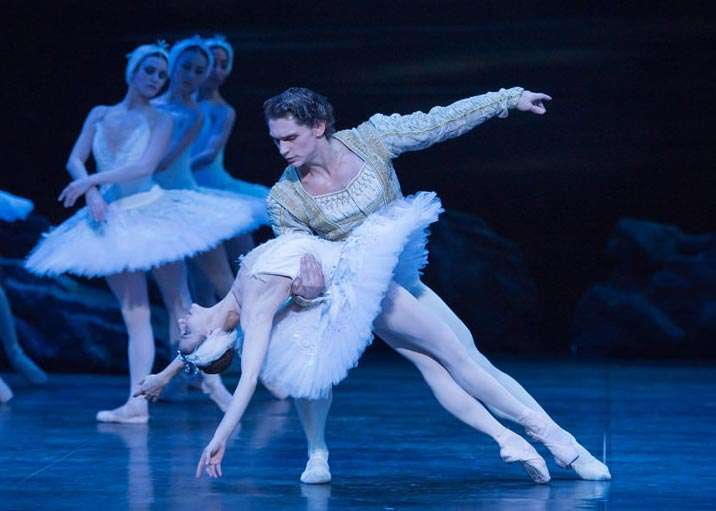 It is not an exaggeration to say that English National Ballet has stolen a march on The Royal Ballet yet again: Covent Garden’s roster of principal dancers, those who take the leads in its productions, is lacking sparkle, but ENB’s Director, Tamara Rojo, continues to secure starry guest artists to pep up her company’s schedule. Thus, on the second night of the London Coliseum revival of Derek Deane’s production of Swan Lake, she herself – a ballerina of undeniable worth and star-quality danced with Alban Lendorf, the current darling of the Royal Danish Ballet, and on first night, Alina Cojocaru, the second Royal Ballet ballerina to defect to here, was paired with Russian tyro Ivan Vasiliev. These are world-class dancers whom balletomanes will travel from afar.

Deane’s handsome production delivers everything one hopes and expects from a Swan Lake – Peter Farmer’s autumnal sets and costumes set precisely the right note: elegant, yet unobtrusive. The swans are in tutus and feathered headdresses, the court chamberlain the epitome of medieval major domo, the lakeside endowed with rocky crags from which the fated pair will ultimately hurl themselves to their deaths. The now-named English National Ballet Philharmonic was perhaps not always as musically precise as one would have wished, but Gavin Sutherland certainly knows how to whip the music and set pleasingly brisk tempos, driving the narrative onward and rarely, if ever, letting momentum sag. 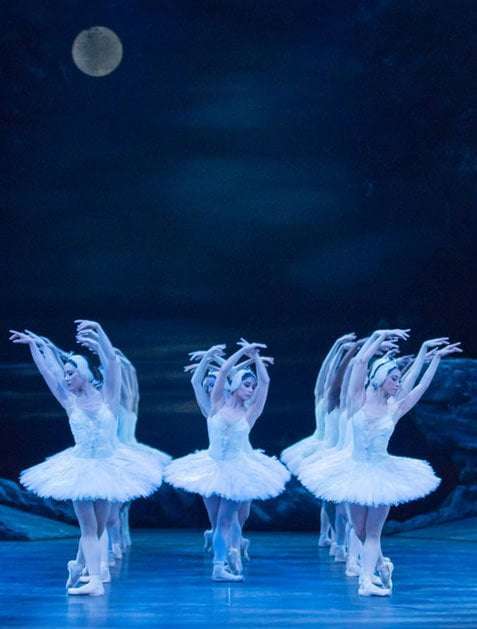 The company looks in rude health, with excellent work from the corps de ballet swans, pleasingly together and sharing a common musicality – the famed Dance of the Cygnets was not only reassuringly familiar but danced with precision. Derek Deane’s choreographic text derives from his own knowledge and experience of the old Royal Ballet version, although his decision to excise the Ashton pas de quatre from Act One and its replacement with a slightly rum version of the Petipa pas de trois, here given a somewhat bumpy performance, is regrettable.

James Streeter is an experienced, decidedly malevolent von Rothbart who gleefully terrorises Odette and her fellow swans. Ivan Vasiliev is not a natural Siegfried, far from it, both in terms of temperament and physique. He specialises in demi-caractère roles, from the cheeky barber Basilio in Don Quixote and Jerome in The Flames of Paris to the title role in Spartacus, which all are characterised by effortful muscularity. Vasiliev is short, with a thick torso and massively developed legs; this allows him to launch himself into the air and execute the most prodigious feats of technical wizardry, but it does not give him the elongated silhouette of the traditional danseur noble. It can easily be appreciated that he wishes to break out of the virtuoso mould in which he has been cast, and the role of Siegfried allows him to do that, with only one ‘show off’ solo in Act Three and elsewhere the need for strong partnering, elegant movement and an anguished persona. In this Vasiliev was only partially successful – he is cast against type, although he was clearly working hard to establish the mournful character and to capture the enrapt quality of his love for Odette.

Vasiliev was lucky indeed to have such a strong and experienced partner in Alina Cojocaru, whose diminutive stature meant that she was well matched with him. Her Odette is shot through with a melancholic vulnerability, a doomed quality, which prefigure the tragic ending from the very outset. Her dancing remains a model of clarity even if she was technically just a little below par on opening night. She is less a naturally evil Odile in Act III, but she possesses enough ‘flash’ to convince as the malevolent Odette look-alike. What she, and indeed Vasiliev, possesses is undeniable star quality which, in a ballet such as Swan Lake, counts for a great deal; while their performance may not have been ideal in many respects, it provided the audience with the visceral thrill of witnessing two dancers of world renown.