Le Corsaire – ballet in three acts to choreography by Anna-Marie Holmes after Marius Petipa & Konstantin Sergeyev, to a libretto originally created by Jules-Henri Vernoy de Saint-Georges loosely based on the poem The Corsair by Lord Byron 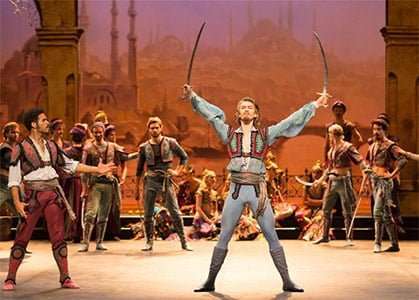 A hit, a copper-bottomed hit. No other description will suffice for English National Ballet’s risky, daring project to bring that piece of ancient regime hokum Le Corsaire to British stages. The Russians have never stopped performing it but this country has never had its own production and has, therefore, no tradition of performance. But company director Tamara Rojo wanted something which would mark her company out – and in this she has been totally successful. In comparison with The Royal Ballet’s recent pallid, characterless Don Quixote, Le Corsaire shines out as big, bold and huge fun – exactly as it should be. All praise to designer Bob Ringwood who brings a riot of oriental colours and magically painted backcloths of suitably exotic locations – the Act Two cave set is simply ravishing, and the sheer beauty of what is seen is captivating.

Famously, Le Corsaire must include a boat which sinks in the final tableau. This is artfully realised, employing ‘Victorian’ stage-craft – it rocks, sails flutter attractively until it founders in a storm and sinks beneath the waves. Additionally, Music Director Gavin Sutherland has subjected the pot-pourri of a score (no less than nine composers are listed) to a little light dusting, quite unlike the deep clean favoured by Martin Yates on poor old Minkus in Don Q at Covent Garden, resulting in a musical performance of satisfyingly brash rumbustiousness. All praise, as ever, to the company orchestra who play as if interested in what they are doing. 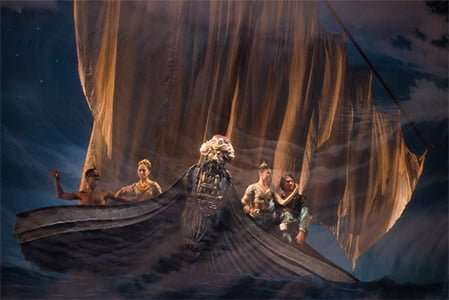 Anne-Marie Holmes, who has staged this production, has taken the pruning shears to the storyline in order to make this enterprise a manageable one for touring purposes, but then no-one would ever hold up Le Corsaire as an exemplar of coherent or subtle narrative – a distinctly cheesy tale of pirate love and abduction, which includes an opium-induced reverie and the afore-mentioned shipwreck. It is, above all, an excuse for wave upon wave of dancing, which is duly provided by this engaging company transformed into pirates, odalisques and concubines. The ballet allows for no less than six lead roles, which were all performed with considerable brio on opening night. Shining with happiness was an energised Alina Cojocaru, whose departure from The Royal Ballet has left such a hole in its roster of principals; she was clearly enjoying herself and rewarded us with some exquisite dancing as the beguiling Medora. In her delivery she was almost eclipsed by Erina Takahashi’s impressive Gulnare – what a treat to see dancing of unquestionable principal quality. Ditto with the superb Vadim Muntagirov as Conrad, the eponymous corsair, now very much grown into a man, fearless, technically highly accomplished and cutting a real dash with hair grown long and piratical beard and moustache.

Junor Souza did well to keep up with him as his sidekick/slave Ali, especially in the famous pas de deux, here given correctly as a pas de trois with Medora. Add Dmitri Gruzdyev as a enjoyably sneaky, snake of a slave-seller Lankendem and Yonah Acosta pumping testosterone as Conrad’s rival in all things piratical and a satisfying roster is complete – there must also be a mention for Michael Coleman’s old fool of a Pasha, bumbling, lascivious and quite adorable. The standard of dancing was high overall – even in a somewhat underwhelming jardin animé scene in Act Three – but especial mention for the three Act One odalisques who were expert in their testing variations, none more charming than Shiori Kase, whose fast footwork and musicality stood out even in an impressive trio.

English National Ballet has certainly has laid down the gauntlet with this production. It is the first triumph for Rojo’s directorship.