Handel
Xerxes – Opera in three Acts to a libretto by Nicolò Minato, revised by Silvio Stampiglia [sung in an English translation by Nicholas Hytner, with English surtitles] 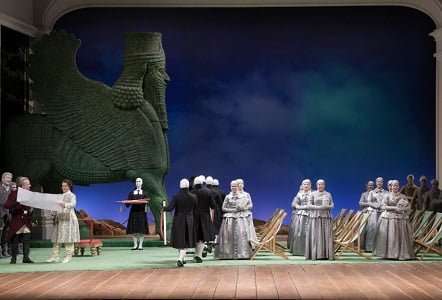 With the demise of Jonathan Miller’s famous juke-box production of Rigoletto and pipping his Mikado to the honour by one year, Nicholas Hytner’s direction of Handel’s Xerxes, sung to his perceptively brilliant translation, returns to the ENO stage for its sixth revival as the company’s oldest production. Originally mounted in Handel’s tercentenary year, 1985, it kick-started the Handel revival, and comes up as fresh as ever in Michael Walling’s faithful re-mounting. As such, with its delicately witty business in the da capo arias (just the management of deckchairs by the white-faced flunkies is to marvel at), it must rate as one of the most influential of all ENO productions, and remains one of its greatest Handel achievements.

Always a joy to watch, this revival boasts an eagerly awaited Xerxes in the shape of Alice Coote, who struts about the stage as if she owns it. It helps, of course, if you are sumptuously costumed and set in the most beautiful designs, courtesy of David Fielding, re-imagining Handel’s own time and the Vauxhall Pleasure Gardens where Georgians came to be entertained, here as they wander through an exhibition of ancient Persian artefacts, including a gargantuan Assyrian winged lion, and a cactus garden. The action of the seven individuals are watched, usually silently, by grey-clothed couples, and some of the action is overseen by Roubiliac’s famous statue of Handel, renamed Timotheus, court musician to Alexander the Great who sacked Persepolis. A book including illustrations of Persepolis had been published the year before Handel had composed Xerxes and the production supposes that Persian fervour had overtaken London, neatly bringing Xerxes homeland to Handel’s adopted home. 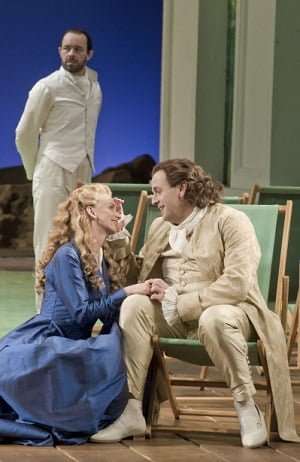 In fact the plot is hardly Persian-specific at all. It’s a story of two brothers (Xerxes and Arsamenes) and two sisters (Romilda and Atalanta) who inconveniently fall in love with each other – the two brothers for Romilda and the two sisters for Arsamenes. Add in Xerxes’s spurned lover, princess Amastris, who comes to seek her revenge disguised as a soldier and you have the basis for the story. There is reference to the bridge over the Hellespont, by which Xerxes could then attack Europe – here unveiled as a model of an archetypal London Bridge, which prophetically collapses in one of the greatest of all thunderstorms – but that aside you could set the complications of sibling love in a Canary Wharf office block, as long as one of the brothers could hold power over all the others. I can’t imagine, though, it could ever be as beautiful as Hytner’s production.

Under Michael Hofstetter’s spirited conducting, this is not a ‘period’ band, but – as when Charles Mackerras first conducted it – ENO’s own orchestra, with only two theorbos and a continuo cello added. But the feeling of authenticity pervades the music, complete with a countertenor as Arsamenes, Andrew Watts reprising the role with ringing tone and comic timing. Also returning to the production is Sarah Tynan, who has previously sung Atalanta, now singing Romilda, with Neal Davies once again as her and Atalanta’s father, Ariodates. New to the production, along with imperious Coote, are two ENO Harewood Artists: Rhian Lois having flouncy fun as the plotting sister Atalanta (the role originally created in this production by Lesley Garrett) and Catherine Young as Amastris. Adrian Powter completes the cast as Arsamenes’s servant Elviro, adding a touch of comedy to many scenes. 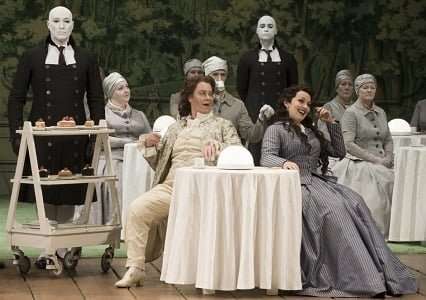 Matching the classical beauty of the production, design and direction, the singing and diction are exemplary. Two examples from the final Act will suffice: following Romilda’s and Arsemenes’s lover’s spat ‘You insult a constant lover’, hilariously diffused by the unwitting intervention of Ariodates who has mistaken Xerxes’s orders, Xerxes shows the darker side of his character in his angry outburst ‘Rise, ye furies from baleful abysses’, which Coote pounces on with spitting venom and thrilling vocal fireworks. It’s a hallmark of the show that such attention to detail is maintained through to the very end and marks another fine achievement for ENO, celebrating its own history and reminding those who need reminding of the importance of English National Opera to our cultural fabric.