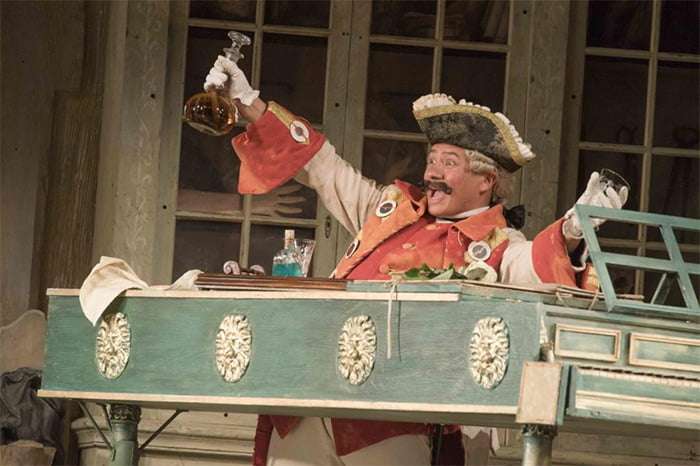 This thirteenth revival of Jonathan Miller’s production of The Barber of Seville marks its thirtieth birthday, and it taps into something fundamental about Rossini’s most popular comic-opera that it has held its own against a more bustling version for the Royal Opera (last seen this time last year), and that by Glyndebourne which will also be seen on Tour around the country this season. Underlying the colour and spectacle of its period costumes and décor (faithfully bringing to life the eighteenth-century era in which it is set) is the claustrophobia of the space in which the action is played out at the forefront of the stage, first outside of Dr Bartolo’s house with its solid stone walls and barred windows behind which Rosina is trapped, and then within it.

It is through Rosina’s eyes, rather than Count Almaviva’s, that we are meant to see and feel in Miller’s interpretation; and it largely succeeds not only through that impression of being caught within an almost two-dimensional space, but through the musically stern but relatively dignified characterisation of Dr Bartolo by Alan Opie (who once played Figaro in this production), and the innocent, fresh-sounding Rosina of Sarah Tynan. Certainly they each bring comic fervour to the roles, not least in the way that Opie is believably duped by Figaro and Almaviva’s various tricks and disguises, and his taking part in the singing lesson with ‘Don Alonso’ partly in falsetto. The charm of Tynan’s portrayal of Rosina draws attention away from the slightly insecure performance by Eleazar Rodríguez in the higher register of the music written for Almaviva, although his ability to switch between the Count’s various manifestations is creditable. 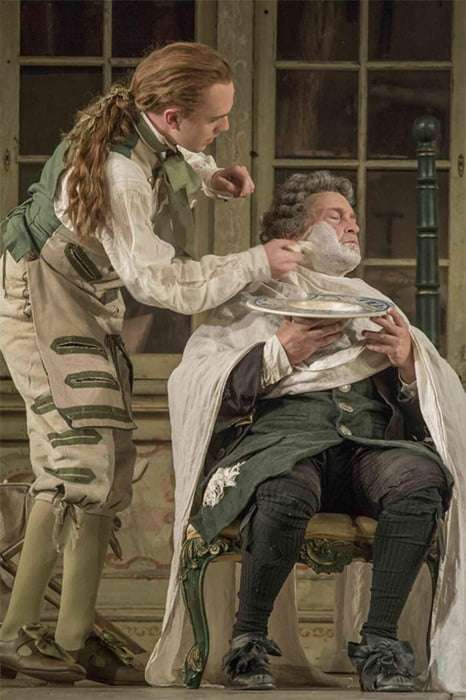 Morgan Pearse shows at least as much comic agility and ease in the part of Figaro. If ‘Largo al factotum’ does not quite take off with the required fizz and energy, it is perhaps due to the fact that, in English translation, the aria does not trip off the tongue with the same verve as it does in Italian. That is also the case for Don Basilio’s calumny aria, as Alastair Miles otherwise evinces a balance between the character’s weedy disposition and obsequious attention to Bartolo on the one hand, and musical coherence on the other. No translation can be entirely satisfactory, however, and in many other respects this one by Amanda Holden and Anthony Holden remains witty and pertinent.

For the most part this production avoids playing to the gallery with any undue slapstick or raucous emphasis, and to that extent remains faithful to those elements of the work which relate to the genre of a ‘sentimental’ comedy as well as taking it seriously as an exploration of character. It would seem to be commensurate with this dramatic impulse that among the smaller roles, Yvonne Howard makes for an impressive Berta as she reflects upon the sad state of her spinsterhood as compared with the happily romantic future that awaits Rosina.

Hilary Griffiths’s conducting of the score is also best appreciated in that light – it does not sparkle so as much as smoulder and radiate steady good humour, but there is evident enjoyment and enthusiasm on the part of the orchestra. It is slower-paced than one might ordinarily expect, but complements the production in also encompassing a different rhythm of vitality and insight.