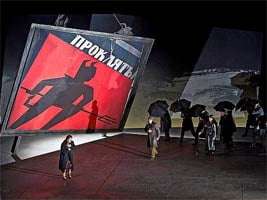 Janáček’s taut operatic realisation of Ostrovsky’s storm arrives at ENO in an exciting new production by David Alden and with a cast playing to its strengths and working as a true ensemble. The spare atmospheric sets of Charles Edwards comprise one long semi-painted wall and a doorway that dominates the early part of the action, and which is manoeuvred easily to reflect the changes of location. Its positioning at irregular geometric angles and its roughness indicate strongly that all is not well around and within the Kabanov household. All the while the backdrop is of a rough splash of water, premonitory of the heroine’s suicidal destiny. Later on the settings are spare indeed, and the subtle use of subdued and limited lighting further enhances the oppressive mood and environment that Katya finds unable to escape.

This fits well with Mark Wigglesworth’s occasionally expansive interpretation, finely realised by the ENO Orchestra, which was on cracking form. From the soft yet menacing opening chord punctuated by the repetitive eight-note theme that pervades the opera in various guises right through to the tempest of the final act with its rolling thunderclaps this is a reading strong on atmospherics. Trumpets, horns, timpani, flutes, oboes and harp all create their colourings most beguilingly but unnervingly. The score’s lyric and heady episodes have, for all their apparent warmth and reassuring harmonies, an empty quality that reinforces the grip this music has on the listener. 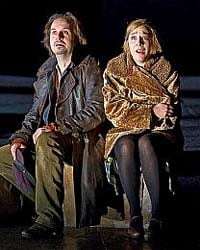 There’s some fantastic singing and acting, too, and every word of Norman Tucker’s classic translation is audible. The title role is a gift to a strong lyric singing actress and Patricia Racette certainly held the stage every moment she was on it. This Katya was already well on the way to crumpling under the stifling pressures of her married life even when we first saw her, and Racette also managed to evince that it is this state that perhaps has caused all those around her to project or impose their own unsettled emotions or desires on her. She sang well and even in her more dreamy and recollecting moments there were hints of the desperation that ultimately leads her to self-annihilation. This was good dramatic singing. Racette also has an expressive face and body-language, and the sense of her attempting to soar to freedom as Katya describes her childhood was well mirrored in her first embrace with Boris. One of Alden’s most effective directorial strokes was to have Katya often teetering along the very front edge or margins of the stage as if on the edge of a precipice, whilst the others were more rooted (or tied) to the secure centre ground. 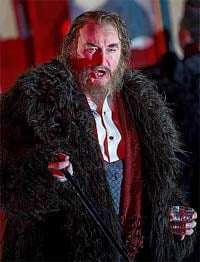 Dominating the stage in another sense was Susan Bickley’s fearsome Kabanicha, marvellously costumed and bewigged, and catching unerringly the hypocritical and implacable nature and sheer nastiness of one of opera’s most unsympathetic women. She relished the angular vocal lines, and cunning staging meant she often seemed to appear from nowhere to taunt Katya; and, to great effect, she also seemed to walk along very straight and rigid lines. The first scene of the second act told you most of what you need to know about the motivation of the character, and her secret life and twisted rapport with Dikoy was both unpleasant and unsurprising. It engendered some (nervous?) laughter from some in the audience. Her composure and apparent moral rectitude at the end was absolutely chilling. The occasional flash of deep red colours under her largely black costume, which seemed similar in colour to the dress Katya wore to meet Boris, gave rise to a brief and interesting thought that Kabanicha might have been an unhappy survivor of a similar predicament in her earlier life.

There was also strong interaction with John Graham-Hall’s unusually vivid and detailed vocal and dramatic portrayal of Tikhon, a weak and physically inexpressive man trapped in a household of three different yet strong women with nowhere to hide. He caught the emotional desperation better than most interpreters, making his alcoholism very much a symptom of his situation rather than the cause. Varvara and Kudriash provide the youthful counter to Katya and Boris’s more-fraught relationship. Anna Grevelius’s Varvara was particularly strong in catching the younger girl’s mix of generosity, impetuosity and burgeoning sexuality that causes her to tempt Katya in the way she does. Her singing was warm and ingratiating. Alfie Boe was a cooler, less playful Kudriash than many, and there was a sense that Kudriash was not quite as besotted with Varvara as she was with him. Stuart Skelton’s Boris was suitably enigmatic. There was something curiously unsettling about his apparent ‘stalking’ of Katya at the start and his seeming nonchalance when waiting for his first assignation with Katya in Act Two. Dramatically he brought out the contradictions of Boris, and his ultimate weakness, and he sang with apposite ring and tension. Set against these fine portrayals perhaps Alden’s treatment of Dikoy was a little too obviously boorish and two dimensional, though Clive Bayley managed to bring him to life. All the small minor parts made much of their cameo moments, though I’m not sure Kuligin’s drunken groping of Katya really worked in the context.

That the opera was played through without an interval helped maintain the tension significantly, and the first-night audience responded with enthusiasm. This is definitely an evening worth catching from musical, vocal and theatrical perspectives.