Mascagni
Cavalleria rusticana – Opera in one act, libretto by Giovanni Targioni-Tozzetti & Guido Menasci, after Giovanni Verga’s play, based on his story [sung in an English translation by Sean O’Brien]
Leoncavallo
Pagliacci – Opera in two acts and a prologue, libretto by the composer, based on the play Un drama Nuevo by Don Manuel Tamayo y Baus and the play La femme de tabarin by Catulle Mendès and Paul Ferrier [sung in an English adaptation by Lee Hall] 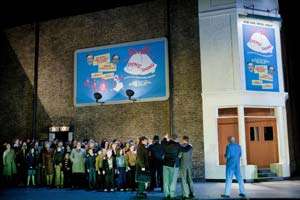 Possibly the most successful double-bill in opera history, these two short operas by Mascagni and Leoncavallo were responsible for the rise of verismo, the realistic movement in Italian opera.

Mascagni’s piece gave rise to many imitations, although only ‘Cav’ and ‘Pag’ were the ones that really took off with any success. Even Mascagni, the son of a family baker, was not aware what a hit show he had on his hands and it was left to the composer’s wife to submit the piece to an opera competition. It promptly won first prize, received its premiere in Rome in 1890 and has remained in the repertoire of opera companies all over the world.

“Cavalleria rusticana” ticks all the boxes for a guaranteed success: a simple but dramatically effective plot concerning well-defined characters set against a believable background of Sicilian village life, allowing the deployment of a large chorus of locals, and all set to the most glorious music. One’s only cavil might be that the grandeur of the music belies the drab principal characters – they really don’t deserve the great score that Mascagni wrote for them. On the other hand the glorious sounds made by the massed villagers earn them every note that’s going. 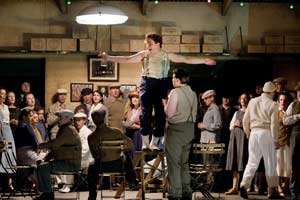 Basically it’s a ‘rom-com’ that goes wrong. Village girl Santuzza was in love with Turiddu, although he swore an undying passion for Lola before going off to the army. On his return he finds Lola has married Alfio and so he begins the affair with Santuzza. The jealous Lola takes Turiddu back and when Santuzza reveals this to Turiddu’a mother, Lucia, she is horrified and tries to reason with her son. The resulting complications lead to a tragic conclusion.

In a new translation for Richard Jones’s English National Orchestra production, Sean O’Brien calls the piece “Sicilian revenge”, although its traditional English title is usually “Rustic chivalry”. Seeing that the denouement involves murder, the new title is more appropriate. The single setting (by Ultz) is the wine shop run by Turiddu’s family and there is no sign of the church which usually figures in the Eastertide piece, with the famous ‘Easter Hymn’ taking pride of place in the action.

The production fields some top rank singing from Jane Dutton as Santuzza and Peter Auty as Turiddu. Separately they are brilliant but together they strike real musical sparks off each other. Good work too from Roland Wood as Alfio and Fiona Murphy as his wife Lola, the latter proving that whatever Lola wants, Lola usually gets. Note that for this production Turiddu acquires a non-singing, disabled brother, played by Robert Ewens who has cerebral palsy.

Martin Merry’s Chorus provides terrific support with great waves of sound flowing over the action to superb effect. The Orchestra under Edward Gardner elicits every last drop of emotion from the score, culminating in the ‘Intermezzo’ (a match for the ‘Easter Hymn’) which adds frisson to this tale of ill-advised obsession. 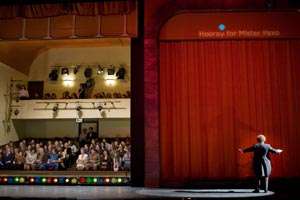 In ENO’s staging “Pagliacci” has lost its definite article. Ruggero Leoncavallo, like Mascagni, is remembered solely for this one work. He wrote a dozen operas and nearly as many operettas including versions of “La bohème” and “Oedipus Rex” but it is only “I Pagliacci” that remains in the popular repertoire. Usually set in a circus or commedia dell’arte situation and called in translation “The Clowns”, it tells of a touring company of players in which the audience witnesses a play within a play, two stories running simultaneously, one a staged play, the other about the relationships between members of the company, an oft-used theatrical device subsequently taken up by the likes of Michael Frayn, Alan Ayckbourn and Cy Coleman.

Lee Hall (of “Spoonface Steinberg” and “Billy Elliot” fame) provides a new translation. Here it is called “The Comedians”, although in fact the touring company here depicted is taking a trouser-dropping sex-comedy to provincial repertory theatres. If “Pagliacci” is no less grimly dramatic than “Cavalleria rusticana”, the emphasis here is definitely on the comic rather than the tragic. Only the names have been changed to protect the guilty. In this cheesy collection of third-rate actors, Canio, the leading man, becomes Kenny, Nedda, his duplicitous wife, is now Nelly, Tonio, the revolting second lead who is harassing Nelly, is just plain Tony, another comic, Beppe, is Brian, and Silvio, the handsome hunk of a stage carpenter who is trying to get Nelly to elope with him, is Woody. 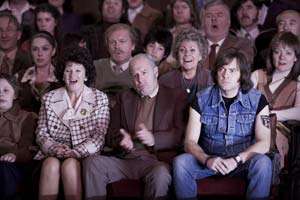 The piece opens outside the theatre (it could well be Wimbledon) as the company arrives to appear in “Ding Dong”, the allegedly “hilarious new comedy” starring the cast of television’s popular “Bless my soul” sit-com. “Ding Dong” is a farce about a wedding night and how things can go wrong if the bride is two-timing her new husband and the bellboy is also after some action. This is played out in the final scene as the appalled audience watches life imitating art as the relationships finally break down, ending in tragedy.

I am not sure if too much comic business is good for the general tone of the piece but have to admit that it is still very funny and very skilfully managed in Ultz’s double set in which the theatre audience is side by side to the action.

Geraint Dodd is a superb Kenny/Canio and is truly moving in his aria ‘Vesti la giubba’ (On with the motley) here translated as ‘on with the greasepaint’. Mary Plazas as Nelly/Nedda is a fine physical comedienne in the Hylda Baker mould. Christopher Purves is horribly funny as Tony/Tonio, a comedian descended from a line that includes Bernard Manning, Eric Morecambe and Syd Little. Mark Stone’s Woody/Silvio is a finely-drawn character who falls apart as he witnesses from his front-row-stalls seat just what is happening. The large chorus again scores well as the members of the audience.

On the whole both pieces work well and they should prove popular … a good and very entertaining start to the new season.