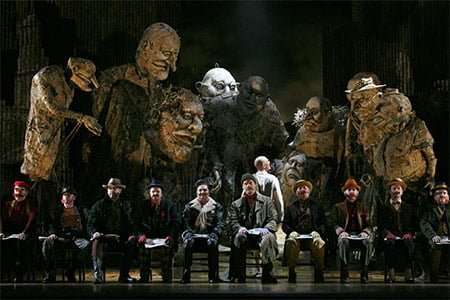 Philip Glass certainly knows how to mythologise a life. In his second ‘portrait’ opera Satyagraha (1980), based on the life of Gandhi (the first and third take Einstein and Akhnaten as their subjects), he uses a libretto, in Sanskrit (ENO offers no surtitles), extracted from the Hindu teachings of Krishna to give voice to the real spirit behind events in Gandhi’s early career in South Africa, where he led the resistance to the virulent anti-Indian racial laws. The events themselves, rather than followed chronologically, are deployed as a process of illumination, and Glass and his librettist make Gandhi a figure observing his own life, the dapper young barrister morphing into the so-called “half-naked fakir” who in his later, post-South Africa occupation so got up Winston Churchill’s nose (although, to be fair, Churchill is supposed really to have described Gandhi as a “seditious fakir”).

On top of that, the director Phelim McDermott has three key historical figures – Tolstoy, Rabindranath Tagore and Martin Luther King – whose agenda of non-violent protest were either inspired or were inspired by Gandhi – silently dominate each of the three Acts. The effect is a distancing involvement, rather like looking down the wrong end of a telescope, yet, like any historical opera, play or novel, refining the truth beyond mere facts. 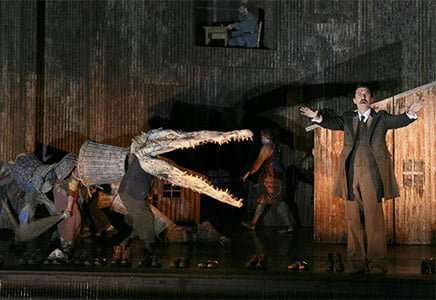 McDermott has described Satyagraha (first seen at ENO in 2007 and then revived in 2010) as meaning “truth force”, and listeners must decide for themselves whether Philip Glass’s music fits that particular bill. Its circling repetitions, hypnotically undulating arpeggios, chugging rhythms, energising syncopations at moments of crisis and basic and basically static harmonies are fine for evoking primal emotions, rather less good for characterisation.

Yet in the end, resistance, passive or otherwise, is futile, and I succumbed to its Zen, time-filling suspension and numerous beauties, while recalling a musician friend’s remark that playing in Glass’s orchestral music is oddly dehumanising.

McDermott, though, has complemented these atmospheric sound-drapes to maximum effect in his astonishing staging, one of ENO’s most memorable in recent years, an elaborate affair that brings the historical and spiritual contexts vividly to life. The 12-strong Skills ensemble manipulate monstrous papier-mâché puppets of ugly white supremacists and fantastic Hindu deities with chilling/magical results, and the scene based round the newspaper Indian Opinion is incredibly imaginative. 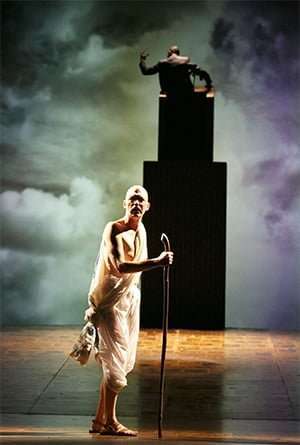 The video work is just as crucial – in the absence of surtitles, there are projections of bits of the text (in English) onto Julian Crouch’s versatile corrugated-iron set (corrugated iron being the primary material for shelter) nudging your understanding in a certain direction – meta-titles rather than mere subtitles – as well as some stunning images – the arrival of the ocean liner bringing Gandhi back to South Africa was very grand, as were the sky-scapes in the final scene.

The role of Gandhi emphasises the powerful, resonant centre of Alan Oke’s supremely expressive tenor, and, this now being the third time he’s sung the role at ENO, he knows well how to inject feeling and authority into the music. Intonation and momentum wavered a bit in the duet between Gandhi’s wife Kasturbai and his Indian co-worker Mrs Naidoo, and there was a rare moment of humour in Sarah Pring’s Lady Billows-like Mrs Alexander, the European friend who came to Gandhi’s rescue on his return to South Africa, sung, as with all the supporting cast, with great assurance. The ENO Chorus was in spine-tingling form in the offstage music at the start of Act Three, and the men gave the threatening laughing chorus at the opening of Act Two a distinct Verdian flavour. The orchestral playing sounded anything but dehumanised, conducted by Stuart Stratford with a feel for colour and a vital sense of urgency.

The closing scene is overwhelming and in its process of synthesis shows Glass to be a powerfully direct dramatist. With one of the Skills ensemble as Martin Luther King silently delivering what could well have been his “I have a dream” speech, Oke poured passion into the simple rising scales of his final aria to unforgettable effect, bringing a terrific show full-circle. May the power force be with you.