Puccini
La fanciulla del West – Opera in three Acts to a libretto by Guelfo Civinini & Carlos Zangarini based on the play The Girl of the Golden West by David Belasco [sung in an English translation by Kelley Rourke, with English surtitles] 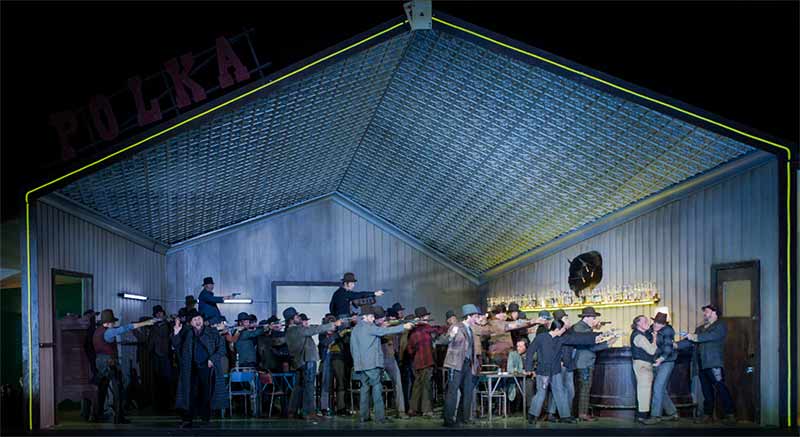 This is Puccini’s gun-slinging heroine’s year in the UK, with productions of La fanciulla del West from Opera North and Opera Holland Park preceding Richard Jones’s new one for English National Opera, its first, surprisingly, since the 1960s. Anyone hoping for Jones’s exuberant brand of subversive irony, though, to illuminate this Wild West tale of love in a remote Californian mining camp will be disappointed. If you bear in mind the liberties he took with Annie Get Your Gun a couple of years ago, this is one of his more sober productions, although done with great affection, the only major re-think for a story set in the Gold Rush in 1849 being to update it, to no obvious advantage, to a vaguely mid-twentieth-century period, with the prospectors and miners dressed generically as cowboys, along with a couple of dispossessed Red Indians under the white man’s thumb.

Miriam Buether’s sets – a long bar with utility metal furniture for Act One’s Polka Saloon, Minnie’s stripped-pine, flat-pack cabin for Act two and the front of an anonymous US Marshall’s office for Act Three – have an Edward Hopper melancholy and Jones’s signature orderliness about them, while Buether has also given Jones his design-fix of neon lights, kitsch patterns (on the Polka’s ceiling), a moose’s head and cheap-and-cheerful curtains. Even Jones’s fondness for carefully choreographed chorus-movement is restrained – the miners dancing together in Act One was neatly done but the entire Company baying for Dick Johnson’s blood in Act Three was uncharacteristically visceral, as confrontational as the similar moment in Peter Grimes. 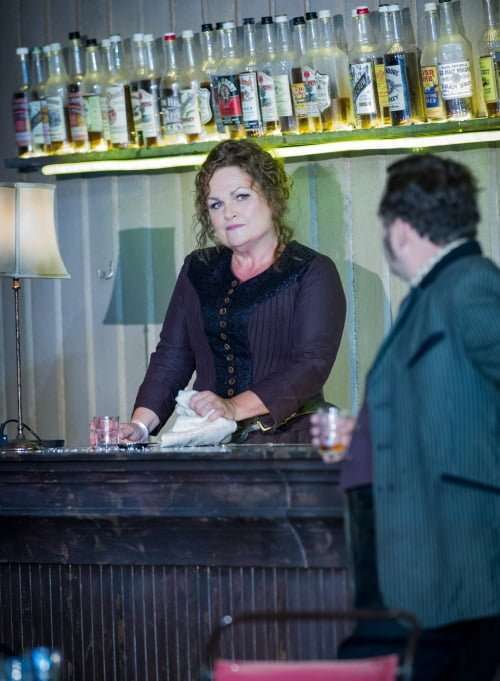 Apart from the blizzard we could see swirling outside one of the windows, there’s nothing to suggest the vast Californian sierras that all these vulnerable frontiersmen need protecting from, just a black void. It is Jones’s way to circumscribe big emotion with claustrophobic, suburban neatness, but you do want to feel it can be punctured by the story’s lurid melodrama, and which only happens fitfully.

Minnie is a monster of a role, folding in the Virgin Mary, Brünnhilde and Dolly Parton, preferably with an all-too-vulnerable rhinestone carapace. Susan Bullock has the necessary vocal heft, with a big, at times unruly top. Not every sound is beautiful, but she sang with a vital, elemental dynamism, touching as she dwelt on her insecurities, riding chorus and orchestra magnificently as she journeys to her lover’s rescue in Act Three and big-hearted and lyrical in her love scene with Johnson. You could see why the miners were so protective of her.

Tenor Peter Auty was on impressive form as the bandit Dick Johnson, the middle of this singer’s voice the fullest and most attractive I’ve heard it, swinging into some passionate top notes and acting with a raunchy physicality. Unusually, he often sounded darker than the bass-baritone Craig Colclough’s Sheriff Jack Rance. Colclough expressed the complexities of the unloved and unlovely Rance well, his passion for Minnie leaking into uneasy obsession. A bit more of a potential, sadistic Scarpia wouldn’t have gone amiss, but there was enough of a looming, awkward presence to anchor this very unequal love triangle, and he force-fed the drama in the blisteringly good poker-game that decides Johnson’s fate, unforgettably matched by Susan Bullock. 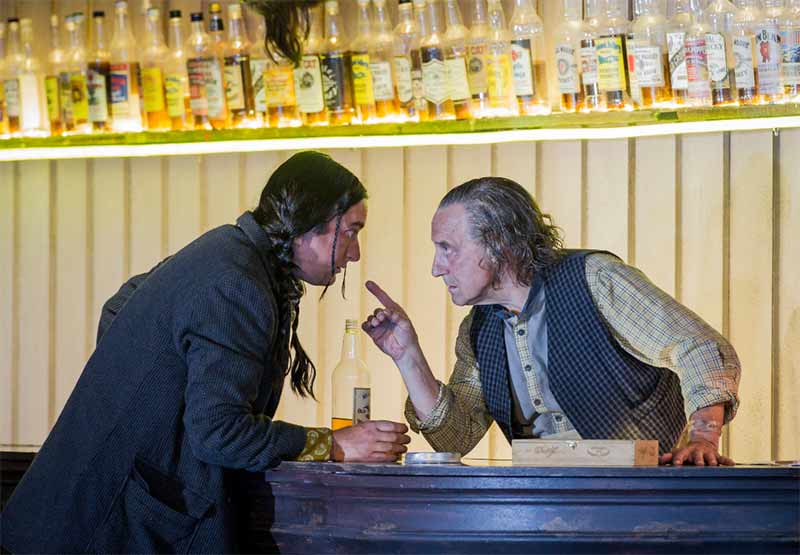 The smaller roles stood out – Graham Clark’s wheedling bartender Nick, a strongly played and sung Sonora and Wells-Fargo’s Ashby from Leigh Melrose and Nicholas Masters. George Humphreys broke hearts with Jake’s homesick ballad, which goes on to percolate through the opera, and Harry and Joe made their marks thanks to Richard Roberts and Sam Furness.

If Jones played his cards close to his chest, the Canadian conductor Keri-Lynn Wilson (in her UK debut) didn’t. She had the measure of Puccini’s finest score, built on a powerful lyrical thread rather than a sequence of arias, and she and the ENO Orchestra mined it for a wealth of detail that did justice to a very Italian take on the Wild West epic. She moulded the various elements of the first Act into a comprehensive whole, let the Act Two love-scene expand with Wagnerian fervour and guided the third Act, dominated by great singing from the men’s chorus, to a visionary conclusion, even if Minnie and Dick didn’t exactly walk off into the sunset.

Postscript from Peter Reed regarding the performance on October 30
The main reason for going back to ENO’s excellent The Girl of the Golden West was to catch the cast change of the American tenor Richard Roberts as Nick, the Polka Saloon’s barman (taking over from Graham Clark for the last two performances, with Philip Sheffield replacing Roberts as Harry and momentarily stealing the show with Harry’s contribution to the homesick ballad).

Roberts, a natural in Janáček, Puccini and Wagner – his Mime for Opera North and Longborough was superb – brings brisk characterisation to everything he does, and his singer-actor credentials are enhanced by his generous, lyric tenor. One of the main secondary roles, Nick is a decisive presence in all three Acts, something Roberts took to heart in his bustling authority over the miners in the Polka in Act One and in his bittersweet dialogue with Rance, which opens Act Three.

Otherwise, I was completely won over by the commitment of Susan Bullock as Minnie; Peter Auty’s Johnson has become vocally bigger and more liberated; Leigh Melrose’s Sonora is a vivid performance; and, while I don’t much care for Minnie’s Wendy house in Act Two, overall Richard Jones’s production shows real feeling for the piece.