Skip to content
LnRiLWNvbnRhaW5lcltkYXRhLXRvb2xzZXQtYmxvY2tzLWNvbnRhaW5lcj0iNmIzNDMzNmNmZTc3NWZiNGJlMTVjMmIwMzU3NWM1MjYiXSB7IHBhZGRpbmc6IDI1cHg7Ym94LXNoYWRvdzogNXB4IDVweCAxMHB4IDAgcmdiYSggMCwgMCwgMCwgMC41ICk7Ym9yZGVyOiAycHggZG90dGVkIHJnYmEoIDEwOSwgMTA4LCAxMDgsIDEgKTsgfSAudGItZmllbGRbZGF0YS10b29sc2V0LWJsb2Nrcy1maWVsZD0iODM3Y2ExZjc0MGRjZDdkOTdlMzQzOWMyYjIwMWZmZTMiXSB7IGJhY2tncm91bmQtY29sb3I6IHJnYmEoIDIzOCwgMjM4LCAyMzgsIDEgKTtwYWRkaW5nLXRvcDogMTBweDtwYWRkaW5nLWJvdHRvbTogMTBweDtwYWRkaW5nLWxlZnQ6IDEwcHg7IH0g
LnRiLWNvbnRhaW5lcltkYXRhLXRvb2xzZXQtYmxvY2tzLWNvbnRhaW5lcj0iNmIzNDMzNmNmZTc3NWZiNGJlMTVjMmIwMzU3NWM1MjYiXSB7IHBhZGRpbmc6IDI1cHg7Ym94LXNoYWRvdzogNXB4IDVweCAxMHB4IDAgcmdiYSggMCwgMCwgMCwgMC41ICk7Ym9yZGVyOiAycHggZG90dGVkIHJnYmEoIDEwOSwgMTA4LCAxMDgsIDEgKTsgfSAudGItZmllbGRbZGF0YS10b29sc2V0LWJsb2Nrcy1maWVsZD0iODM3Y2ExZjc0MGRjZDdkOTdlMzQzOWMyYjIwMWZmZTMiXSB7IGJhY2tncm91bmQtY29sb3I6IHJnYmEoIDIzOCwgMjM4LCAyMzgsIDEgKTtwYWRkaW5nLXRvcDogMTBweDtwYWRkaW5nLWJvdHRvbTogMTBweDtwYWRkaW5nLWxlZnQ6IDEwcHg7IH0g
Britten
The Turn of the Screw – Opera in a prologue and two acts;Libretto by Myfanwy Piper after the story by Henry James
LnRiLWNvbnRhaW5lcltkYXRhLXRvb2xzZXQtYmxvY2tzLWNvbnRhaW5lcj0iNmIzNDMzNmNmZTc3NWZiNGJlMTVjMmIwMzU3NWM1MjYiXSB7IHBhZGRpbmc6IDI1cHg7Ym94LXNoYWRvdzogNXB4IDVweCAxMHB4IDAgcmdiYSggMCwgMCwgMCwgMC41ICk7Ym9yZGVyOiAycHggZG90dGVkIHJnYmEoIDEwOSwgMTA4LCAxMDgsIDEgKTsgfSAudGItZmllbGRbZGF0YS10b29sc2V0LWJsb2Nrcy1maWVsZD0iODM3Y2ExZjc0MGRjZDdkOTdlMzQzOWMyYjIwMWZmZTMiXSB7IGJhY2tncm91bmQtY29sb3I6IHJnYmEoIDIzOCwgMjM4LCAyMzgsIDEgKTtwYWRkaW5nLXRvcDogMTBweDtwYWRkaW5nLWJvdHRvbTogMTBweDtwYWRkaW5nLWxlZnQ6IDEwcHg7IH0g 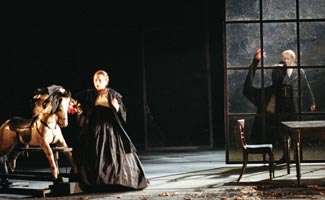 Before commenting on the details and features of this production, I can report that this was, overall, an entirely persuasive presentation of the opera that many consider is Britten’s finest. Indeed, it was a thoroughly gripping and, at times, extremely moving experience.

David McVicar’s staging of “The Turn of the Screw” bears all the hallmarks of his characteristic perception of characters, along with their motivations and actions. This was very much a ‘tactile’ production, with close physical contact between the protagonists. Miles was very much the centre of attention; his attempted kissing of The Governess producing an almost revolted reaction from the latter, whilst his interaction with Quint, initially at any rate, suggested an easy mutual affection.

The playing area did not particularly differentiate between the outside and interior – key items of furnishing such as the bed, the piano and rocking-horse, were present throughout – and some clatter audible during the movement of sliding sets in between scenes was a slight distraction.

The cast is a strong one.

Timothy Robinson’s The Prologue set the scene with admirable diction (rendering the surtitles virtually redundant) and clarity of utterance. He later made the personality of the deceased manservant Peter Quint an almost sympathetic one – less a fearsome ogre than a lost soul – the mellifluous quality of Britten’s vocal lines being quite seductively sung, matched by apt and fluid body movement. 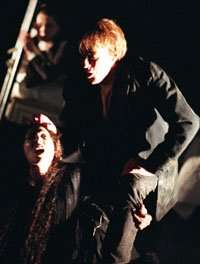 As his female counterpart, Cheryl Barker again elicited compassion, especially in her encounter in the schoolroom with The Governess where her heartfelt laments made one appreciate anew the ambivalence of Britten’s realisation of Henry James’s story – no mere ghostly haunting, this, but an exploration of the darker side of the psyche. As The Governess says: “I know nothing of evil yet I feel it, I fear it, worse – imagine it.”

Mezzo Ann Murray was wholly admirable in the soprano lines of the sympathetic – if, until the end, uncomprehending – housekeeper. Aware of her ‘place’ in the household, she made one aware that there are social hierarchies to be ostensibly respected. Her contribution to the penultimate scene, with her simple “Indeed, Miss, there’s nothing there” whilst Miss Jessel stands right beside her added much tension to the confrontation between Flora and The Governess.

Both Miles and Flora were portrayed as being rather older than James – or, probably, Britten – envisaged. The role of Flora can be problematic. Britten’s original cast included an adult but the part has been taken by younger singers including Nazan Fikret, now a second-year student at the Guildhall School, who has been performing it since aged 13. She sang strongly and projected a convincing character. Her weeping during Miles’s “Malo” song was an especially touching moment – has Flora seen and heard all this before? If, finally, Miss Fikret is perhaps too tall to be entirely credible, it scarcely detracted from her considered portrayal.

George Longworth (sharing the role with Jacob Moriarty) was as convincing a Miles as one might imagine. Without being too ‘knowing’ or ‘arch’, his demeanour belied his apparent innocence and his singing was secure and expressive.

Rebecca Evans gave an astonishing performance as the (nameless) Governess. From her initial apprehensions to a gradual realisation that all might not be well at Bly, she not only delivered the music accurately but also gradually suggested someone becoming progressively unhinged through being caught up in events beyond her comprehension or control. Just a little more amplitude at “Begone! You horrible, terrible woman”, a climactic phrase addressed to Miss Jessel would have been welcome.

In the pit, the wonders of Britten’s chamber scoring were well-attended to. Some really first-rate playing added to the success of the evening. Garry Walker’s tempos were largely suitable, though the Governess’s letter to the children’s guardian should have urgency as well as expressiveness and, just occasionally, more power might have been unleashed – such as the gong-saturated chord underpinning Miss Jessel’s cry of “Quint, do you forget?”.

But this is a production of tremendous integrity, and attendance at one of the remaining performances is strongly recommended.