Offenbach
Les Contes d’Hoffmann – Opéra fantastique in three Acts with Prologue and Epilogue to a libretto by Jules Barbier & Michel Carré after E. T. A. Hoffmann [sung in the English version by Jeff Clarke, with English surtitles, and performed in the arrangement by Stephen Anthony Brown]

Epilogue
Cast as for Prologue, plus:
Stella – Ilona Domnich 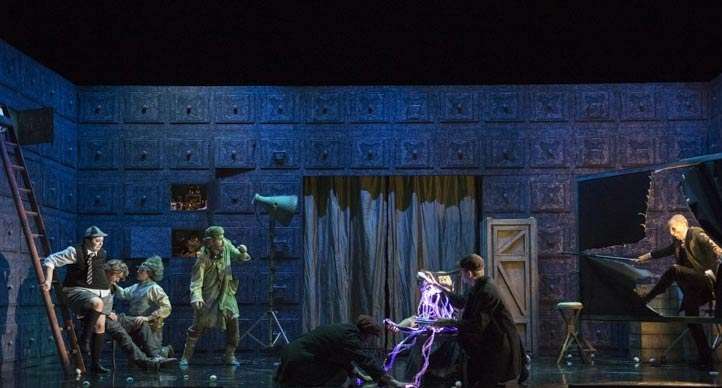 English Touring Opera has a winner of a show with The Tales of Hoffmann. There is no definitive version of Offenbach’s score, which was left unfinished at his death in 1880 and then completed soon after by Ernest Guiraud. The real E. T. A. Hoffmann (1776-1822) supplied the “bizarre” stories and his name was retained as one of the operatic characters: for ETO he’s a cigar-smoking bon viveur silent-movie maker who impresses upon us his life and loves. The real-person love is Stella, here Hoffmann’s leading lady (as Greta Garbo might have been), and manifestations of her appear in the various Tales as respectively Olympia, Antonia and Giulietta, all four superbly acted and stylishly sung by Ilona Domnich. 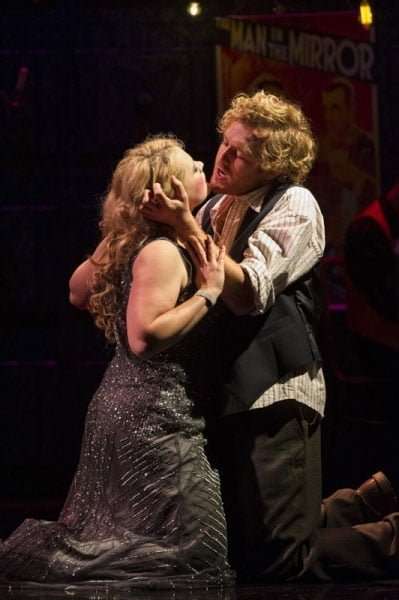 Several of the singers are required to play more than one role, not least Warwick Fyfe who makes a big impression as sinister characters, beginning with the “satanic” Lindorf. Of course Hoffmann himself is omnipresent, and Sam Furness is very accomplished as he pursues Hoffmann’s adventures, holding a note well and establishing himself as a heroic tenor. Indeed the cast is uniformly excellent, encompassing acting and singing (and movement) as complementary crafts, and while some parts are necessarily meatier than others, there is a real sense of camaraderie present that makes every performer, and character, as important as the next.

The stories are well-told, vividly, and in lively terms, and the costumes and props are pertinent, lighting can be darkly translucent, and there are some witty visuals. Musically there is much to enjoy, not least the famous ‘Barcarolle’ from Act Three (in Venice, hosted by Giulietta, sometimes referred to as a courtesan), and other numbers will be familiar through Manuel Rosenthal’s gathering of Offenbach’s oeuvre for the ballet of Gaité Parisienne. The music for Tales can embrace operetta lightness and grand-opera intensity, the latter most prevalent in the Act concerning Antonia, the doomed singer for whom the doctor works no miracle: this is a tragic Tale.

In the preceding Act, Olympia is a mechanical doll, all fluorescent-pink puppetry, Domnich one of the handlers as well as supplying the coloratura vocals – for a celebrated aria – admirably and appropriately precise. Later, Stella will be Giulietta, society darling, enjoying champagne, caviar and (note the plural) male companions. Stella – if seen standing behind a mashed-up screen – only appears at the end (Hoffmann now back where he started); thus the Domnich foursome is complete, and she has been impressive. By this time Hoffmann’s Muse (otherwise Nicklausse) – the superb Louise Mott (something of a ringmaster, with lots of galvanising energy) – has returned, and the opera ends with a celebration of art and its creation. 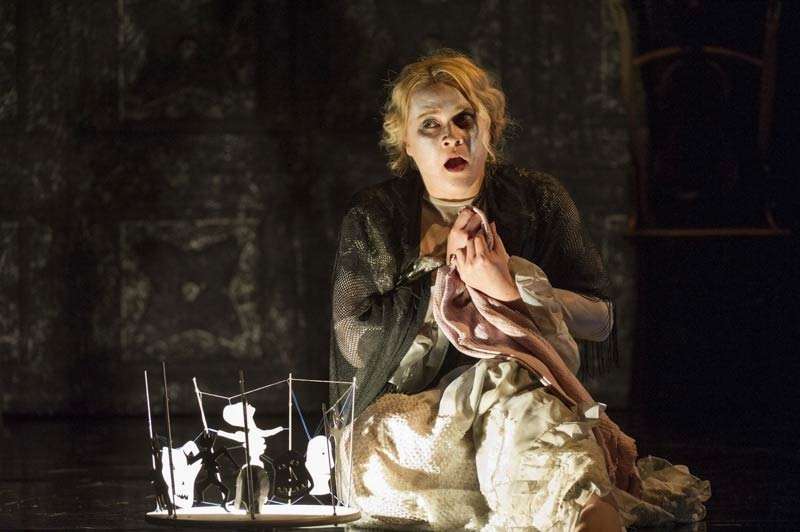 Reservations before the curtains opened had banished by the close, quite early on in fact. French is a wonderfully musical language and it is what Offenbach set, but Jeff Clarke’s English version works a treat with well-made rhyming couplets by the vanload, and they keep the spectator involved in the action, and Stephen Anthony Brown’s reduction of the orchestra to an ensemble of five strings and five winds plus a percussionist might have proved a stumbling block for those of who care about such things – but it works well, maybe too serenade-like at times, and with reminders of the sound of Schubert’s Octet, but it’s delightful in many ways and enjoys first-rate playing – well, if I had a hat I’d have eaten it. Philip Sunderland has the measure of the score and he conducted it with easeful authority and convincing musicianship, also doubling on an electronic keyboard as a substitute for a harp – and it sounded nearly the real thing: good enough.

As its name implies, ETO tours – so if Tales of Hoffmann is coming to a theatre near you (its website has comprehensive details), don’t miss: this production of Hoffmann is very accomplished on all fronts and very enjoyable.