Mozart
Idomeneo, K366 – Dramma per Musica in three Acts to a libretto by Giovanni Battista Varesco after Antoine Dachet’s Idomenée [sung in Italian, with English surtitles] 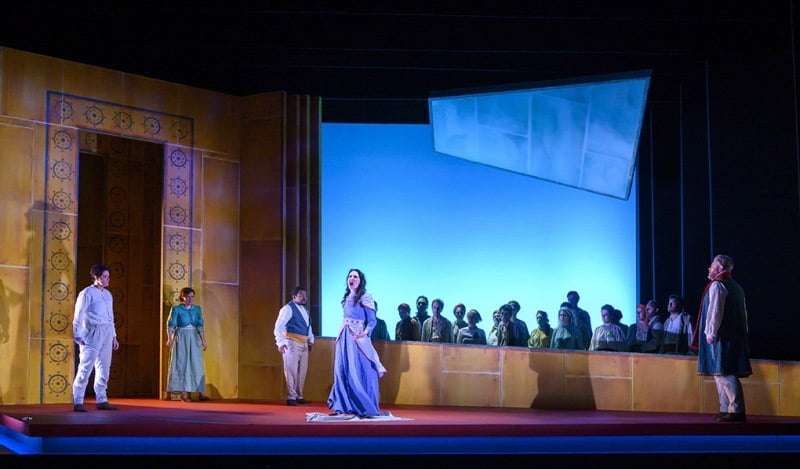 Mozart’s Idomeneo, not always ‘up there’ as an audience favourite, is a tricky work to pull off from a theatrical perspective. It’s a striking choice for a touring company showing as it does a ruler making a rash decision and learning that this has unexpected ramifications and consequences for his family, his people, his country and his reign as fate and destiny decree. No qualms about relevance then!

As an opera Idomeneo has some marvellous music with some great arias, duets and ensembles such that it has attracted performance-versions by such as Richard Strauss and Benjamin Britten. As with much opera seria in the right hands it can be compelling, and it is largely so here, even if there’s a slight theatrical ‘sag’ in the middle. James Conway tells the tale relatively straightforwardly, allowing the principals to present the inner dilemmas with a directness that is oftentimes very moving. Frankie Bradshaw’s adaptable designs, atmospherically lit, are evocative and define the private and public spaces of the action skilfully, even if occasionally the admirable chorus loses out acoustically in some of their placings.

What is clear from the outset is the extremely high standard of the musical performance. The Overture has mood and drive that is sustained throughout with the drama unfolding inexorably and Jonathon Peter Kenny conveys the menace of the tools of the divine, sea-monsters and flash storms. 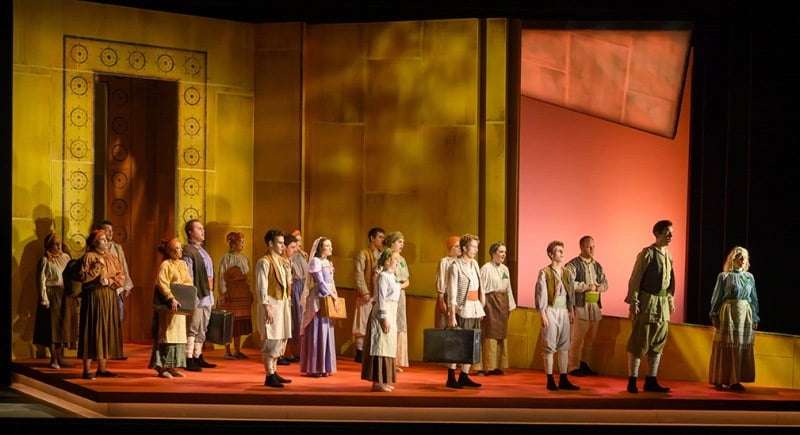 Much is dependent on the singers however, particularly the major quartet. In the title role Christopher Turner possesses just the right blend of the robustly heroic with honeyed tones – Idomeneo is a successful military leader after all – and vocally he is well in command of the florid complexities of the writing. Dramatically his first appearance is suitably intense, likewise the desperate post-oath encounter with Idamante. Later and perhaps intentionally, as Idomeneo’s securities slowly disintegrate, the presentation become less assured, and certainly the continual holding/checking of the coronet on his head threatens to become too repetitive a tic. Nonetheless this is a creditable assumption of a tricky role.

Catherine Carby, her secure, generously warm and emotive mezzo sounding so beautiful in this acoustic, is a wonderfully idealistic Idamante. The simple directness of her acting brings the inner emotional turmoil of the young prince, eager to please while establishing his credentials as a potential ruler in succession, vividly. Galina Averina’s poised vocalism brings Ilia’s arias to affecting life, and she knows how to harness stillness while carrying the audience with her. This stillness provides great contrast with the volatile Elettra of Paula Sides, who catches the developing unhinged nature of the Greek princess effectively without excess caricature. Indeed, one retains a modicum of sympathy for Elettra’s unfortunate predicament. The technical challenges of the role are met and firmly nailed. The cunning dramatic doubling of Arbace and the High Priest gives John-Colyn Gyeantey some limited opportunity to make his presence felt and Ed Hawkins (a cover) provided an amazingly sonorous Voice (of Neptune).

This is a cogent and creditable staging of an ever-rewarding and complex work.