Monteverdi
L’incoronazione di Poppea – Opera in three Acts to a libretto by Giovanni Francesco Busenello [performed in an English translation by Anne Ridler, edited and amended by James Conway, with English surtitles] 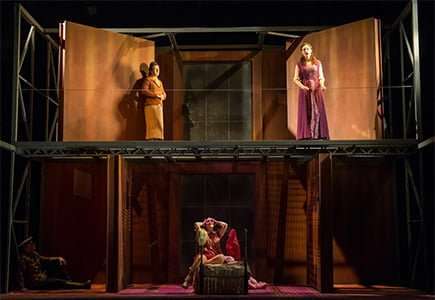 This is a revival by English Touring Opera of James Conway’s production of Monteverdi’s final opera, which updates the action from Imperial Rome to Stalinist Russia. This allows the themes of power and passion to be played out with rawness – but not crudeness – against a backdrop of fear and distrust. In the English translation the character of Amor becomes ‘Love’, with the multiplicity of meanings and aspects which that can encompass. In fact it is lust and self-love that are more on display here, with the destructive and selfish characteristics that implies.

By dint of that, this production perhaps satisfactorily squares the interpretative circle as to how it is in Busenello’s unwholesome narrative that the character of Love can claim to rule the affairs of mortals more surely than his rivals, Virtue or Fortune. The love that conquers here is essentially the hedonistic and exploitative one of Nero and Poppea. It must surely raise the question whether Poppea is not more truthfully in love with Nero’s power than his personality. In the trouser-role of Nero, Helen Sherman did not resemble Stalin, but certainly the part is to be understood as that of a wilful dictator. However musically ravishing, in the final duet ‘Pur ti miro’ where Nero and Poppea express their love, Nero was also seen looking at himself in a mirror on the reverse of which was a self-portrait in the style of the iconic images that the likes of Hitler and Stalin had promulgated in their countries. Self-love and promotion are clearly Nero’s guiding principles.

This is not to say that the production is lacking in constructive manifestations of love, as it retains the example of Drusilla’s attempt to save Ottone by pretending that she herself had tried to assassinate Poppea, not he. But there is no ultimately redemptive outcome for, once they were banished into exile, we saw their blood spattered against the window outside the room in which Poppea and Nero celebrated their union. The spirits of Drusilla, Ottone, Ottavia and Seneca – all victims of Nero’s obsessive lust and power – haunted the final duet between him and Poppea. 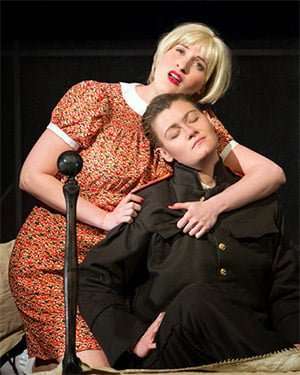 In the Prologue the figures of Love, Virtue and Fortune appeared like a boy and two girls, who might be the members of such groups as the scouts or girl guides. Their debate as to who is the most powerful sounded more like a childish spat. Jake Arditti successfully made the role of Love sound as cynical as the manner in which most of the characters subsequently behave. It is a deft dramatic stroke also to have the singers playing Ottavia and Drusilla double up as Fortune and Virtue respectively, since it is by these principles that they meet their downfall.

The theme of juvenility continued into the opera proper. Poppea was dressed to appear as a young girl, in the sort of attire popularised by Grayson Perry’s alter ego – a dress, white socks, and polished black sandals. She was also seen occasionally with a teddy bear. The blonde wig she usually wore only in Nero’s presence made clear, though, that she is no selfless innocent; and yet at the same time, the contrast between her hairpiece and apparel exposed her inner character as emotionally immature and naïve. Nero’s childishness was all too clear in his altercation with Seneca, wherein he sought merely to gratify his own whims and fancies, at the expense of reason, decency, and good politics.

As Nero, Helen Sherman was imperious, showing appropriate brittleness in the part. Paula Sides equalled this self-serving determination as Poppea, but together they also achieved some tender, even erotic, music-making however hateful the circumstances of their love might be. Hannah Pedley made of Ottavia a character that was no less determined or forceful, and her monologue on being cast aside by Nero and sent into exile was one of the musical climaxes of the evening. Michal Czerniawski’s mellifluous singing made for a sympathetic realisation of the part of Ottone – maybe too much so, given that he uses Drusilla to a considerable extent only in the furtherance of his own vengeful interests. In Busenello’s text, Drusilla is the only truly innocent and virtuous character, and Hannah Sandison made that a reality with a steady, sober account of the role, which was often touching.

Piotr Lempa was very much the musical embodiment of stoicism as Seneca, singing the part with nobility and dignity. His English pronunciation had its imperfections, but was noticeably less stilted than in his appearance in Cavalli’s Giasone previously. The smaller parts were generally well delivered, particularly Stuart Haycock as Lucano, in his lively duet with Nero, celebrating the death of Seneca. Russell Harcourt in drag might have made more of Nutrice, even if only vocally. John Colyn-Geantey, also cross-dressed, appeared as Arnalta, Poppea’s nurse. A certain coarseness of tone was not out of place for this baboushka-like figure, but his less than seamless lullaby to Poppea raises the suspicion that this is not an entirely contrived vocal quality.

With sprightly accompaniment from the Old Street Band under Michael Rosewell – especially the constantly shifting realisations from the continuo section – this is an intelligent production of one of the great operas of any age, which is worth seeing as ETO takes it on tour to venues around England over the next two months.