Britten
Paul Bunyan – operetta in a Prologue and two Acts to a libretto by W. H. Auden [sung in English, with English surtitles] 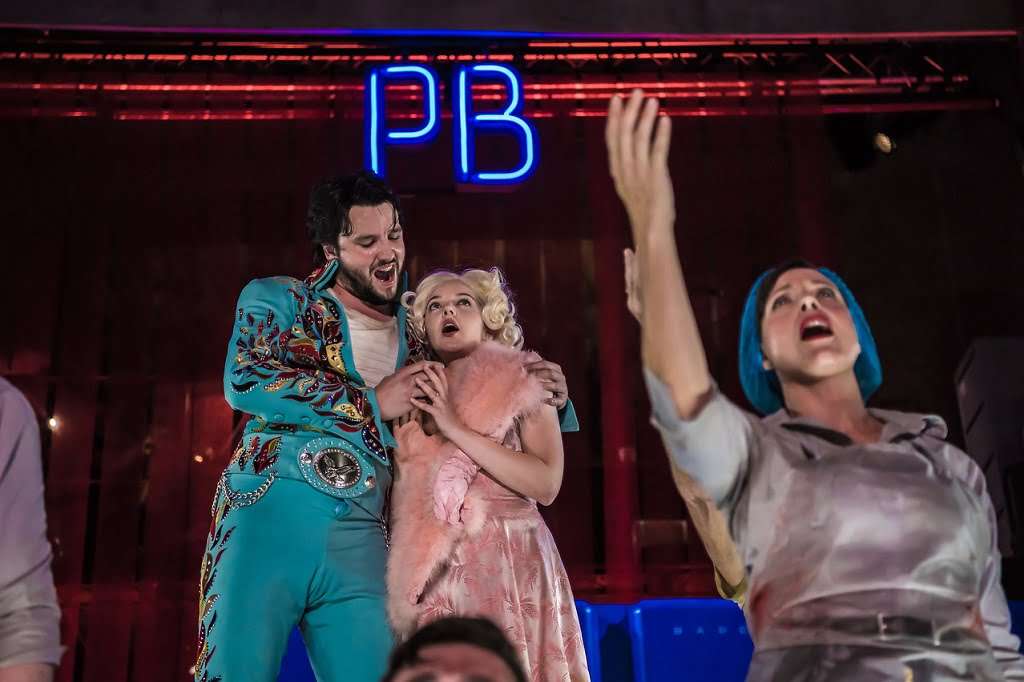 English National Opera’s innovative series of ENO Studio Live productions comes to Wilton’s Music Hall, beyond the Tower of London, for the first time, although the oper(ett)a takes us west, not east – over the Atlantic not only to America, but also to a mythical past. Composed between late-1939 and early-1941, Paul Bunyan was the first full stage collaboration between W. H. Auden and Benjamin Britten (following on from their work for the GPO film unit and Britten’s incidental music for some of Auden’s plays) – variously described as a “school operetta” or an “opera for Broadway”. It was premiered at Columbia University on 5 May 1941, but Britten withdrew the score soon after and was only persuaded in the last years of his life to look at it again, eventually sanctioning a radio broadcast and, finally, a staging at the 1976 Aldeburgh Festival, just months before he died.

It is a curious beast, starting with the older trees of the American West shocked by the rebellious younger trees who welcome the prophecy of one born to help them: Paul Bunyan, a giant with a seven-mile-wide stride. So not your normal Broadway opening number, then – and Bunyan himself is never seen, although in Jamie Manton’s production he is represented by not only the recorded voice of Simon Russell Beale, but also his initials in blue neon above the stage. Bunyan is the closest the Americans have to an origin myth – he recruits lumberjacks from Europe (particularly Swedes whose surname is always their first name repeated with ‘son’ tacked on the end, but also French and Germans) – and they tame the landscape first by logging and then by farming. Eventually Bunyan marries (though not happily) and has a daughter, Tiny (she is of normal size), who comes to work in the camp and falls for the cook, Slim. At the end – after a mutiny of the loggers that sees foreman Hel Helson beaten by Bunyan in a fight – the West is tamed and Bunyan’s work is done, while others accept callings back east – Manhattan and Washington. Manton makes this ending bittersweet, with each of the principals rather conflicted at the new direction their lives are taking. 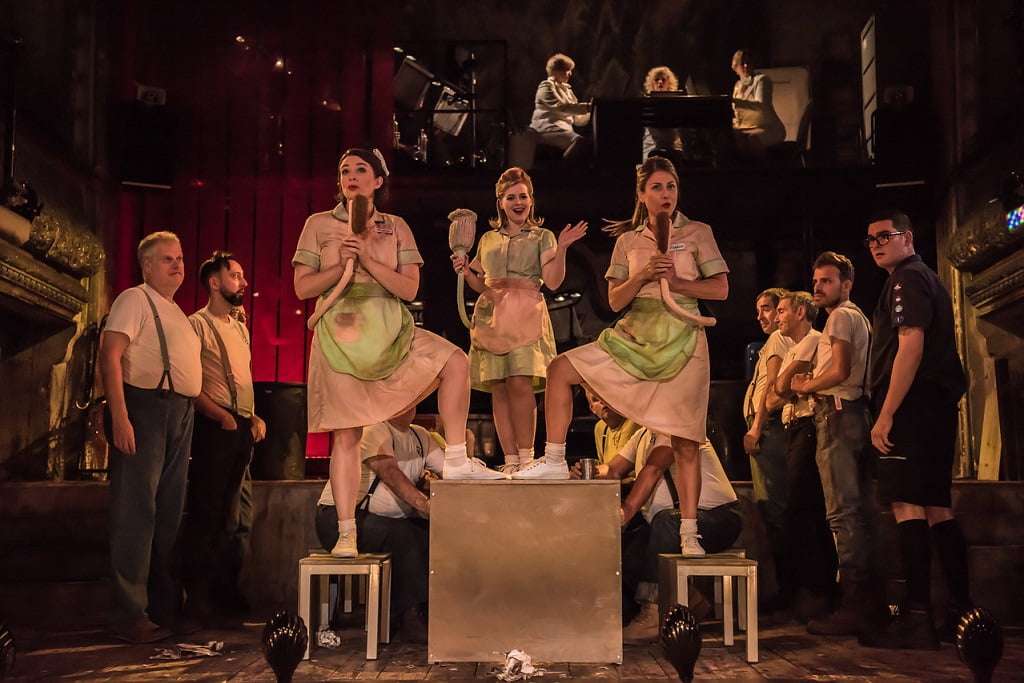 With the twenty-six-strong orchestra somehow accommodated on two levels at the back of Wilton’s stage, with an overspill of percussion, Manton and designer Camilla Clarke imaginatively squeeze in the whole of the American wilderness into one of London’s smallest venues. The chorus spends much time spread around the side of the audience, on both levels, and when it starts singing there is a spine-tingling sense of surround-sound. When the fourteen lumberjacks are singing at full-pelt the building seems to vibrate and, amidst a score that doesn’t always betray where Britten would eventually go musically, these men-only choruses struck me as nascent Billy Budd territory.

Britten’s facility and efficacy for appropriating musical styles is on constant display: the three ballads that really hold the kernel of the story are accompanied by jaunty guitar, with the narrator’s part here taken by three sassy gals, all in white. David Newman’s West Union Boy (perhaps confusingly in a UPS shirt) makes the most of the reprised rhythmic ditty ‘A Telegram’ and the four defeated have a sonorous Blues number to vocalise their woes. 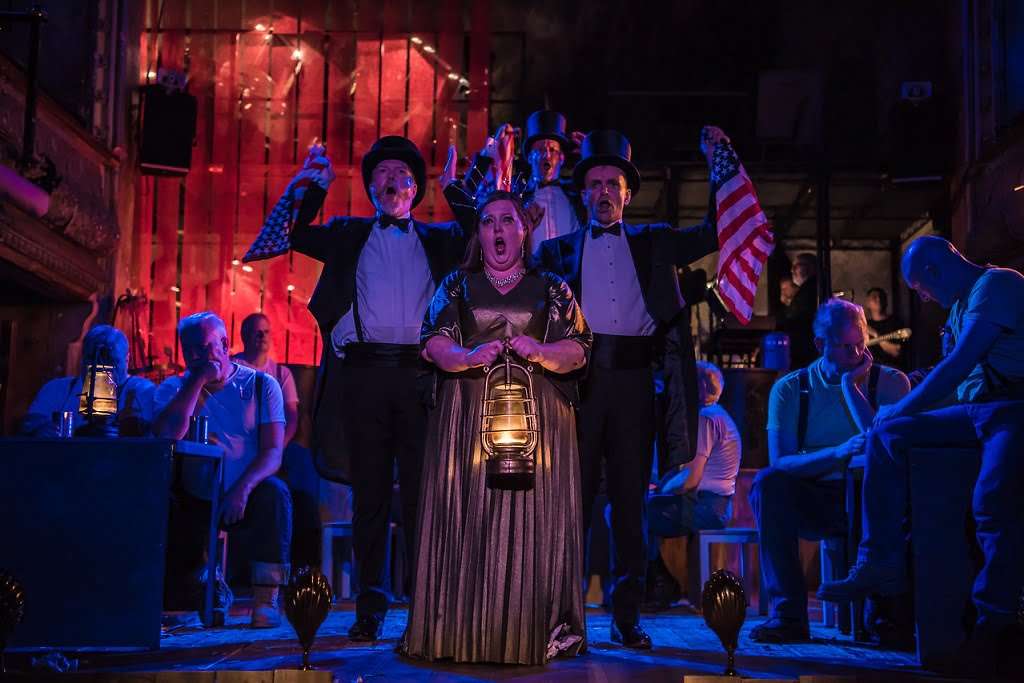 Four of the principal parts are taken by ENO Harewood artists: vibrant Elgan Llŷr Thomas as Johnny Inkslinger the accountant, Matthew Durkan as Hel Helson, William Morgan as Hot Biscuit Slim and Rown Price as Tiny, all rising to the challenge of the restricted venue. Morgan has an impressive costume change, seemingly under a table, into a glittering bell-bottomed Elvis Presley suit in readiness to tie the knot with Tiny. The rest of the ensemble parts are cast from within the ENO Chorus, the basses particularly strong in this small setting, as were the three logging camp pets – Fflur Wyn’s Fido and the two cats Moppet and Poppet.

There is an undoubted surreal aspect to the piece – heightened by the depiction of Bunyan’s best friend, a giant blue ox called Babe, as a blue fridge (delivered by UPS, before growing into walk-in fridges in the second Act). And Hel Helson’s dream before his fight with Bunyan elicits a weird sequence of a meat-packing production line – cutting meat, putting it on a plate then into polystyrene containers and dropped into a tray – the furthest Manton strays from the original. Who would have guessed the production line was formed of a Heron, Moon, Wind, Beetle and Squirrel? 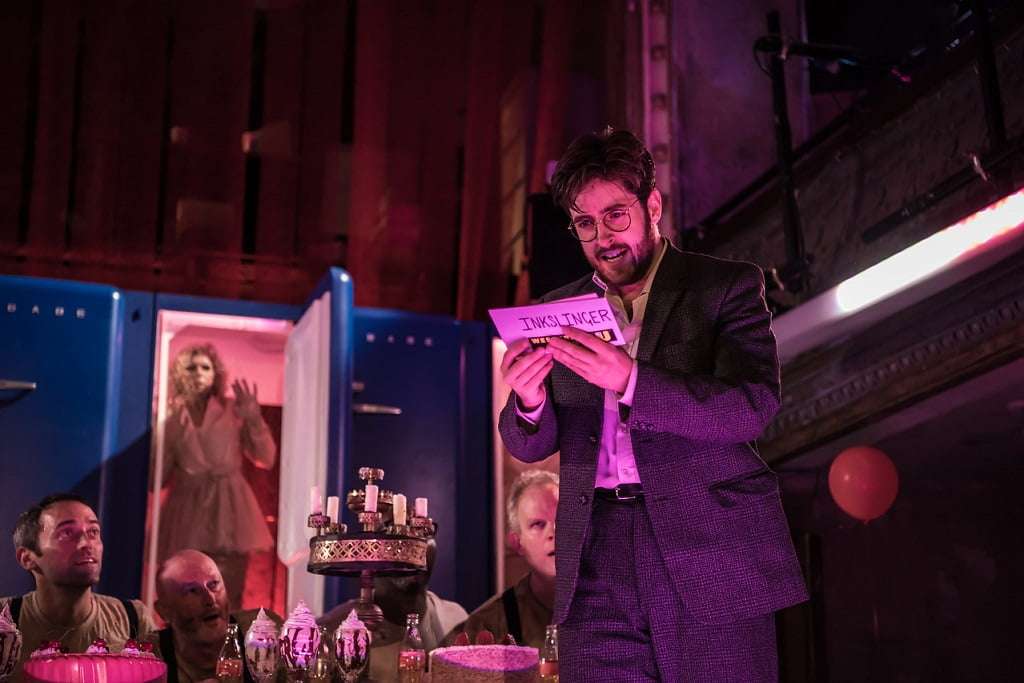 Matthew Kofi Waldren – Mackerras Fellow at ENO – conducts with finesse: a plethora of screens around the venue ensuring he was visible to all singers at all times, while two screens on either side of the gallery offered surtitles, though not visible to all the audience.

As Britten’s first opera, Paul Bunyan may not immediately show the way to how his career would progress but it has an undeniable youthful assurance that is always good to be reminded of. Top marks also to Jorge Imperial for integrating Beale’s sonorous recorded interjections so seamlessly.