Sondheim on Sondheim [European premiere]
A revue to a concept by David Kerman, conceived & directed on Broadway by James Lapine, with music & lyrics by Stephen Sondheim 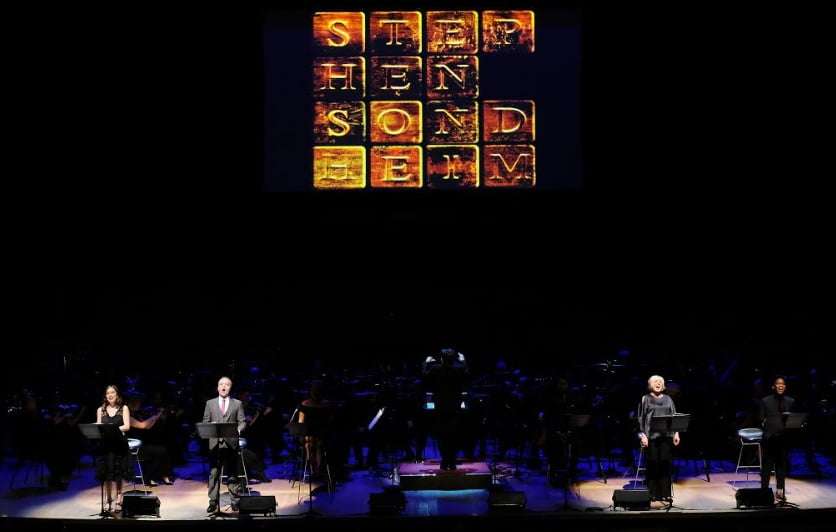 There have been several revues encompassing the work of Stephen Sondheim beginning with Side by Side by Sondheim in 1976, a piece originated by actor-singer David Kernan at the Dankworths’ theatre in Wavenden. It transferred to the Mermaid Theatre in London with Kernan, Millicent Martin, Julia McKenzie and Ned Sherrin, then to the West End for over eight-hundred performances, and subsequently Broadway, then toured the US, Ireland and Australia, and two London revivals.

A sequel, Putting it Together, was mounted at the Old Fire Station Theatre in Oxford for a short run with Diana Rigg, Clarke Peters and Claire Moore. In 1993 it reached Broadway at the Manhattan Theatre Club, with a cast including Julie Andrews. It appeared in Los Angeles and New York again in 1999 but took another fifteen years to reach London with Janie Dee, David Bedelia and Damian Humbley.

In 2000 David Kernan presented another Sondheim sequel, Moving On, which had a narration by the man himself. It had a short run in London, before its US premiere at the Laguna Playhouse in California. It also appeared at Carnegie Hall in 2004 but was then called Opening Doors. James Lapine, who collaborated with Sondheim on Sunday in the Park With George, Merrily We Roll Along, Into the Woods, and Passion, conceived a version of it in Atlanta, Georgia, called iSondheim: a Musical Revue including Sondheim’s narration and forming the prototype for Sondheim on Sondheim. 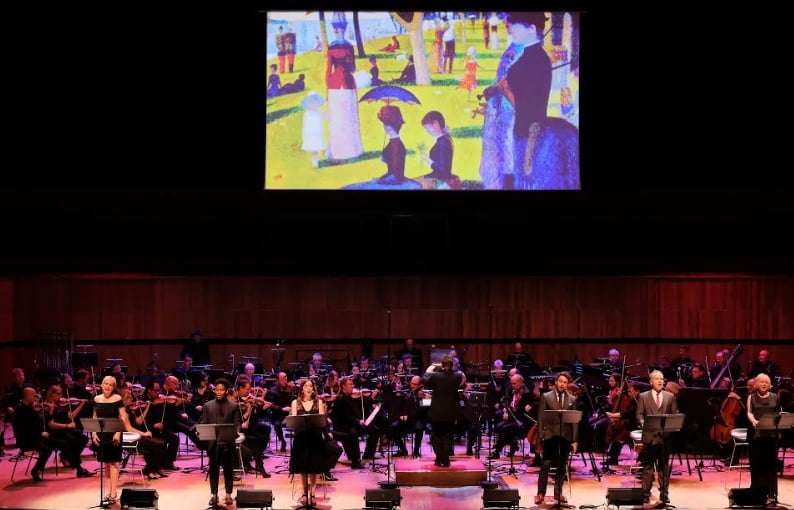 The sound-only interviews with the great man were expanded to include videotapes screened above the musicians, using archival material from the 1960s onwards plus specially shot contemporary conversations. This gave the revue a more personal aspect with Sondheim explaining not only what he was trying to do but also presenting insights into his personal life and his relationships working with other artists.

So you see: there is an insatiable desire to see Sondheim in all his glory and he is particularly well-suited for compilations. His range of musicals is so wide and, as he is so original, he never repeats himself. Spot the differences between West Side Story, Gypsy, Pacific Overtures, Company, Sweeney Todd, Follies, Passion, Merrily We Roll Along, A Little Night Music, Sunday in the Park With George, Into the Woods, and it is difficult to believe they were written by the same man, a true master of both his art and his craft and undoubtedly America’s greatest lyricist and composer of the twentieth-century.

Sondheim on Sondheim proves to be a fascinating evening but sadly for London it was just a one-night affair. Originally it had a three-months run in the States with none other than Barbara Cook in the cast. Another production also ran for nearly three months in Cleveland and it had further productions in San Diego, Vista and San Jose, and at the Hollywood Bowl and in Sydney. 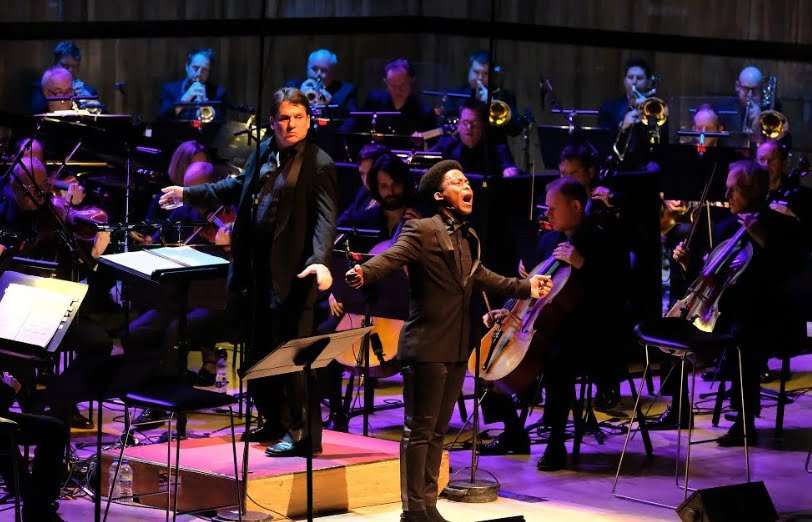 The Broadway production managed to include songs from most of Sondheim’s major shows from his student experiment By George (1946) through to Road Show (2008), at present his most-recent completed piece. The only omission is Pacific Overtures in which the songs are too long for inclusion in an anthology. There were a few more omissions for this London production including Gypsy, Do I Hear a Waltz?, and The Frogs.

With Sondheim on board this must be the definitive collection of his output. It includes numbers that were cut or replaced by others. For instance we learn that ‘Invocation: Forget War’, the opening number to A Funny Thing Happened on the Way to the Forum wasn’t liked by director George Abbott, so it went. He didn’t even like ‘Love is in the Air’, so Sondheim wrote ‘Comedy Tonight’. It is odd that many of his cut songs have, through compilations, become etched into our memories. ‘So many people’ from his originally unproduced Saturday Night has become a definitive Sondheim number just as ‘Take me to the world’ from the television musical Evening Primrose encapsulates the Sondheim ethos every bit as much as say ‘Losing my mind’ from Follies or ‘Not a day goes by’ from Merrily We Roll Along. ‘Ever after’, cut from Company, is a joy and should never have been dropped.

Sondheim reveals something of his personal life but not too much. His mother once told him that she wished she had never given birth to him, a thought that conjures up far too many ‘what-ifs’ for comfort. He also says he never fell in love until he was sixty. As audiences often think his shows are based on his own life, he concludes that the only one about him and his co-workers at the time was Merrily We Roll Along, a piece on how writers, actors and directors undertake the art of making art. Never having been married he felt he couldn’t write about marriage, so sought advice from Richard Rodgers’s daughter Mary (twice married) and the result was Company. 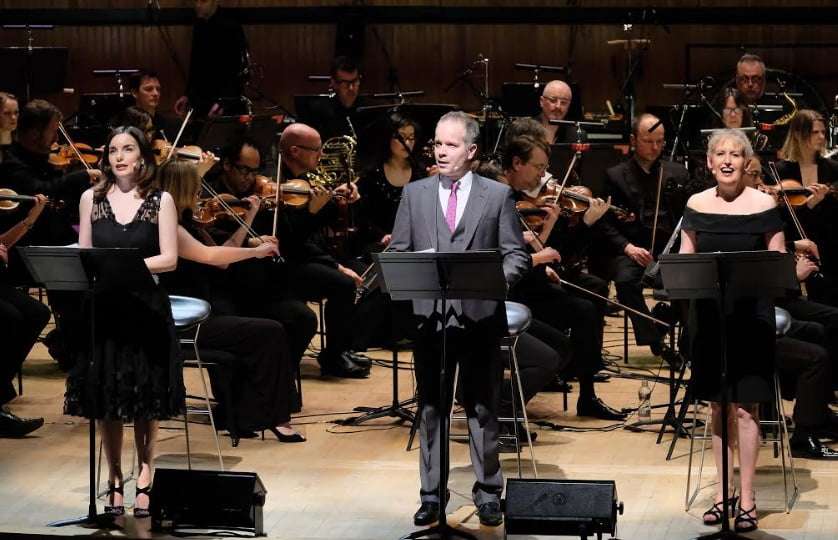 At the Royal Festival Hall the six excellent singers did the material very proud indeed in solos, duets and ensembles. Julian Ovenden was particularly strong in ‘Epiphany’ (Sweeney Todd), while Tyrone Huntley gave a truly impassioned version of ‘Being alive’ (Company). The songs from Passion were delivered with immense sensitivity, while ‘In Buddy’s eyes’ and ‘Losing my mind’ (both Follies) and ‘The Best thing that ever has happened’ from Bounce were given authoritative renditions. Claire Moore made ‘Send in the clowns’, Sondheim’s only chart hit, from A Little Night Music, as fresh as ever. The ensemble excelled in ‘Sunday’ (Sunday in the Park With George) and ‘Children will listen’ (Into the Woods), two great Sondheim anthems.

It is always a pleasure to hear the BBC Concert Orchestra in whatever it does, here doing very well indeed with Keith Lockhart. Sondheim may never have had a sixty-five piece band to play his music before – certainly never in the theatre – and the BBC musicians went to town in Michael Starobin’s brilliant arrangements. Sondheim’s scores can seldom have sounded better or more exciting. However, at times there was a threat that the singers might be drowned out. But one shouldn’t complain (and I am not) at hearing Sondheim’s music played with such gusto.

Sondheim claims he is never really happy with any of his shows, except for Assassins for which he can never find ways of improvement. Here it was represented by ‘Something just broke’ and ‘The gun song’. Even his flops – Merrily We Roll Along, Do I Hear a Waltz?, Anyone Can Whistle – eventually became artistic and popular successes. Initially Follies never made money and Sweeney Todd had a relatively short London run first-time-around, but they are shows that come back again and again. It just goes to show that Sondheim was and remains a man before his time. Later this year London will see a new staging of Company.

Sondheim turns eighty-eight on March 22. He is still at work, writing a musical based on two films by Luis Buñuel. In the meantime it would be good to have an extended run of Sondheim on Sondheim in a small theatre with a handful of musicians. The Other Palace in London’s Victoria springs to mind as being ideal, and which housed the West End premiere of Putting It Together in 2014. We can only hope. Meanwhile, this RFH concert was a great evening, directed with absolute finesse by Bill Deamer, no stranger to Sondheim.