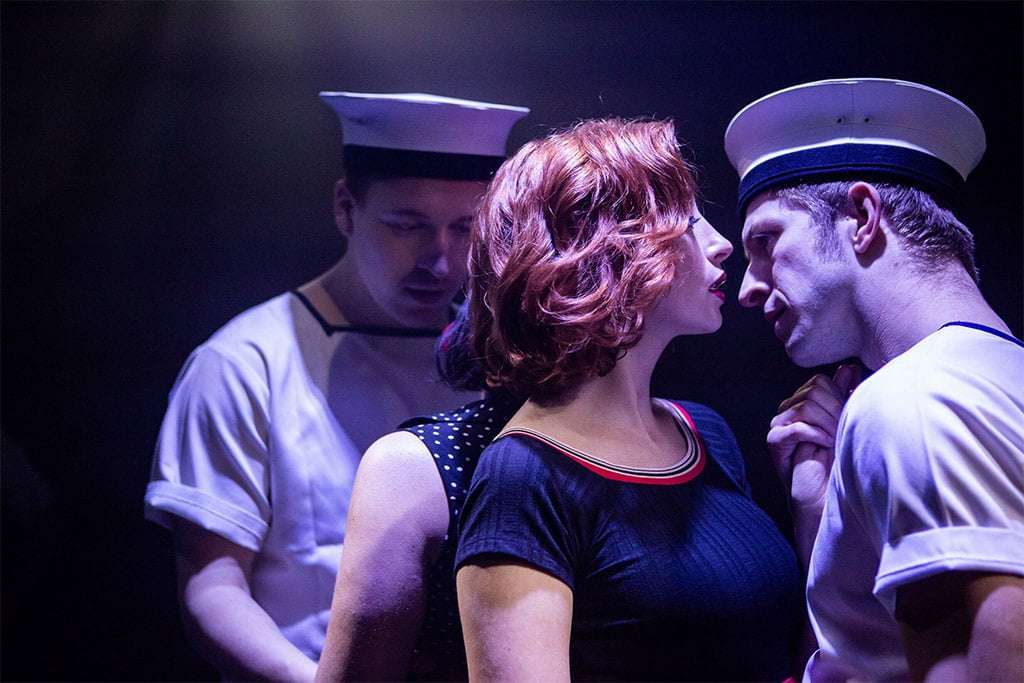 If for nothing else Lionel Bart will be remembered for writing Oliver!, arguably Britain’s most successful stage and film musical. That was in 1960, but before then he had written Lock Up Your Daughters and Fings Ain’t Wot They Used T’Be. He was also known for penning hit songs for Cliff Richard, Tommy Steele, Anthony Newley and Shirley Bassey, as well as writing a title song for Matt Monro for the 007 film From Russia With Love. He never repeated the success of Oliver!. Although Blitz! and Maggie May did reasonably well, and although they were never revived professionally, the National Youth Theatre did them proud in 1990 and 1992. His Robin Hood show Twang! failed to hit the mark, La Strada was on a road going nowhere, and Quasimodo! didn’t get as far as the critics giving it the hump. The last was finally staged decades later at the King’s Head in Islington and proved to be no worse than many a British show that bit the dust prematurely.

The idea for Maggie May came to Bart in 1961, well before Beatlemania had hit Liverpool where the show is set. His inspiration came from a traditional ballad about a Merseyside prostitute, one Margaret Mary Duffy (Maggie May) and her sailor boyfriend from childhood, Patrick Casey. When Casey returns to Liverpool after working at sea, he finds that Maggie is now on the game. Since Patrick disappeared from her life, Maggie has always called her clients Casey, perhaps in the hope that the real one will one day come back. Patrick, in returning from a visit to Africa, is back to work on the docks. The other stevedores want him to be a union leader but he declines. However, later on he becomes involved in a potential dock strike. Maggie gives up walking the streets, although to get back at Patrick she takes up with Willie Morgan, a local crook planning to ship weapons to South Africa. When Patrick tries to sabotage the weapons consignment, Maggie and he reunite but the plan misfires, bringing about a tragic conclusion. 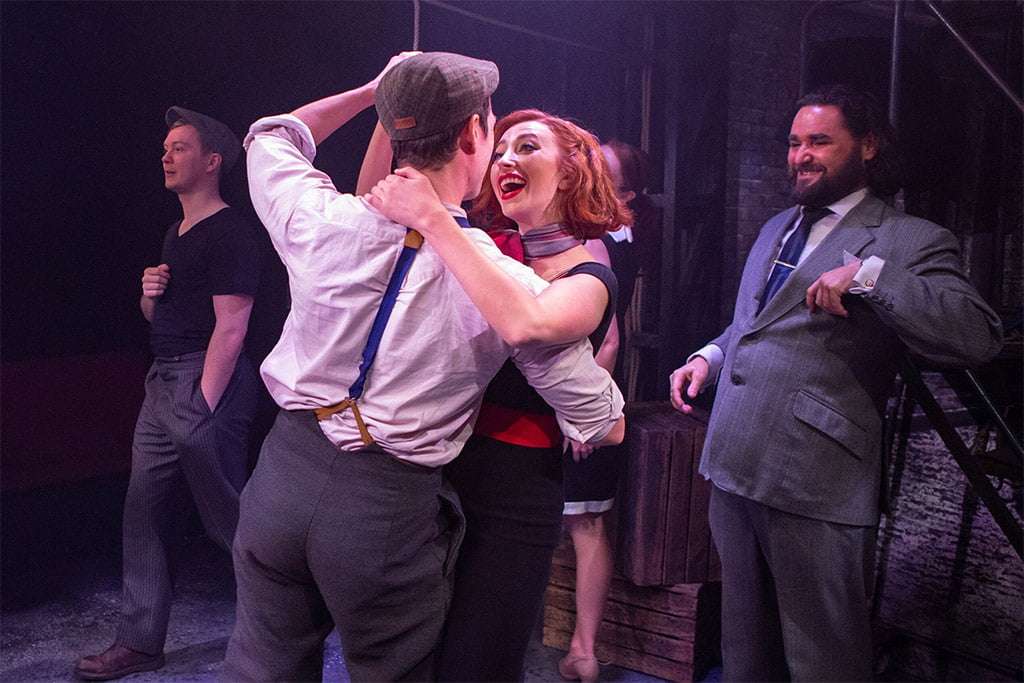 The 1964 London production had a cast headed by Rachel Roberts as Maggie, Kenneth Haigh as Casey and with Andrew Keir, Barry Humphries, John Junkin and Geoffrey Hughes. Georgia Brown eventually replaced Roberts and the show played for a respectable five-hundred performances at the Adelphi Theatre. Bart as usual provided some thumping good tunes, deft lyrics and no doubt Paddy Stone’s choreography was something to behold. In choosing Liverpool-born playwright Alun Owen, who wrote The Beatles’ film A Hard Day’s Night, Bart brought authentic background detail to the story of Margaret Mary Duffy.

Matthew Iliffe’s production for the Finborough Theatre certainly packs the show with enormous energy. Looking smaller than it’s ever been, the playing space is minute but designer Verity Johnson conjures up the requisite ambience and gives us enough scope to work with in presenting a credible portrait of the Merseyside docks. Bart’s music is based on a variety of musical styles such as traditional airs with their Irish-Celtic roots plus more-modern influences from dance styles such as the Twist, the Cha-cha-cha, rock ‘n’ roll, jazz, and even a gentle soft shoe shuffle for the villainous Morgan. Coupled to these are some knees-up type stomping, romantic ballads, comic production numbers and several show-stopping anthemic tunes.

Bart always reckoned he wrote his big numbers with Judy Garland in mind. In fact at the time that Maggie May opened the singer recorded four of its best songs: ‘The land of promises’, ‘It’s yourself’, ‘There’s only one union’ and the title song, which were released on a 45 EP disc (and still available on Judy Garland: the London Studio Recordings, 1957-1964, First Hand Records). Imagine now if Garland had been cast as Nancy in Oliver! or in the title role in Maggie May… the British musical may have been totally different. 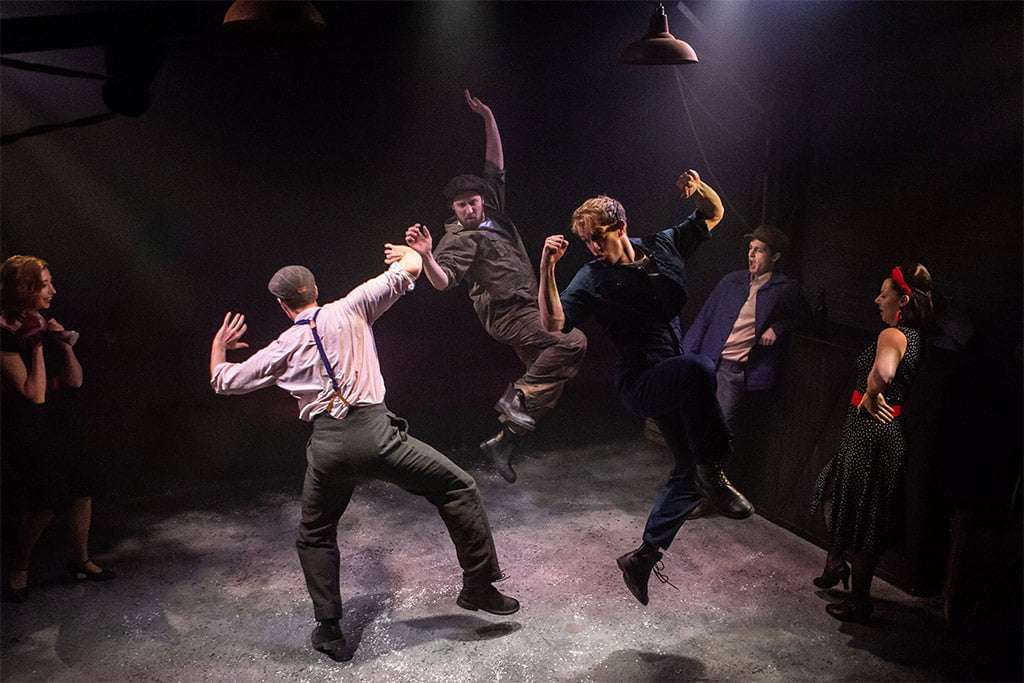 While Noël Coward or Cole Porter wrote about fashionable society, Bart always chose the working class, street urchins, miserable misers, layabouts and vagrants. His people have no pretensions and if they do, then they are classed as villains. In Maggie May his personnel are working men and women trying to survive on the bottom rung of the society ladder. Here the cast totally capture this spirit. Maggie is a tough bird and Kara Lily Hayworth enshrines this toughness exceedingly well. As Patrick, James Darch is an ideal foil, strong when he needs to be but still in love with Maggie. Natalie Williams as Maggie’s best pal Maureen plays the streetwise working girl to the hilt. David Keller gets good mileage out of Old Dooley, a cantankerous old dinosaur, while Euan Bennet as his son Eric is quite the opposite.

The ensemble work is particularly good in Sam Spencer Lane’s brilliant choreography for the energetic routines in ‘Dey don’t do dat t’day’, ‘Right of way’ and ‘D’same size boots’. So athletic are they that the audience is liable to get a docker in their laps. Maggie has perhaps the best numbers – ‘I love a man’, ‘Casey’, ‘Land of promises’, ‘There’s only one union’ and ‘It’s yourself’, the love-duet for her and Casey. Of course the title song is the one that will be remembered: “Maggie, Maggie May / They have taken her away… And she’ll never walk down Lime Street anymore.” Nice to see her down Finborough Road, however, with a feather in her cap for the Finborough Theatre.