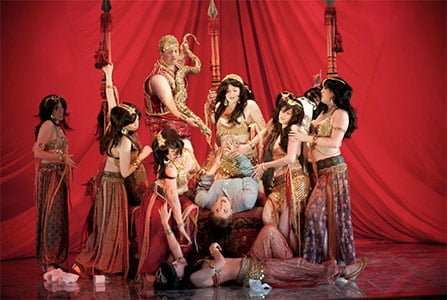 This was the British premiere of a Rossini opera – remarkable! The composer was at the height of his Neapolitan career in 1820 when he wrote what would prove to be his penultimate opera for Naples, Maometto secondo. The work meant much to Rossini given he revised it for his debut at the Paris Opéra in 1826 as Le siège de Corinthe. Maometto secondo is essentially a love story set against the backdrop of the wars between the Turks and the Venetians ending with the fall of Negroponte.

Written in two acts, this is very much an opera of two halves: Act One, full of blood-and-thunder drama develops much narrative, whereas Act Two plays out the love story between Anna (daughter of Paolo Erisso, Governor of Venetians) and Maometto II (Sultan of the Turks, enemy of the Venetians). To begin, Erisso resists the Turks’ invasion because of the entreaties of his general, Calbo (whom Erisso wants to marry-off to Anna). Anna was unaware of Maometto’s true identity when he took her as his lover (before the opera begins) – Maometto pretended to be Uberto when they met in Corinth – but Anna now realises she was duped because it transpires the real Uberto was with Erisso at the same time. The father-daughter relationship breaks down when all is revealed, even though Anna offers her suicide if Maometto does not release her father and Calbo. Act Two develops these conflicting emotions. Anna marries Calbo, and her final deed is indeed her suicide (she threatens to kill herself at every opportunity!) on her mother’s tomb. 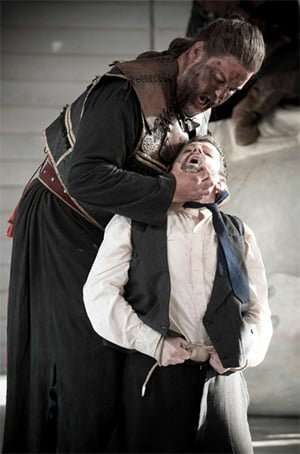 Although titled after the Turk, this is really the Venetian Anna’s opera, as she is in almost every scene, and is the protagonist that determines the actions of the others. Hardly a cheery character (woe is her throughout) Siân Davies made her a woman of conviction-through-adversity, beyond her time in the way in which she seizes opportunities to shape the destiny of those around her. Davies’s soprano is a punchy one, with stamina, and she sounded as fresh for final challenges as she was when she uttered her opening lament for her father (“Ah! Che invan su questo ciglio” – Ah! In vain I call for sweet oblivion), though her coloratura took a while to develop, and was sometimes cloudy. But, at the big moments she pinned the audience to its seats with powerful declamations. The man she ends up marrying (Calbo) was sung by Australian mezzo Caitlin Hulcup, and she’s a scene-stealer! Defiant against all the odds, the approaching Turks, Hulcup sang with tenderness and with rousing calls-to-arms. Calbo’s defence of Anna to Erisso in Act Two (“Non temer”), in which love is conjured, was exquisite, a standout moment.

Maometto II was relished by Darren Jeffrey, who bestrode the stage as though victory was his right. His clear baritone brought many rewards: it soothed and tricked us that we might think him a good guy (he’s not, dispatching torture on a whim). He oscillated between ruthlessness and piety with ease, and with Maometto’s cavatina he produced a showstopper. It’s difficult to feel any sympathy with Erisso, so weak-willed is he. Paul Nilon gave an affectionate account of the role, a very human portrayal during which he exposed the character’s frailties. Christopher Diffey and Richard Dowling (followers of Erisso and Maometto, respectively) both made their brief appearances count. 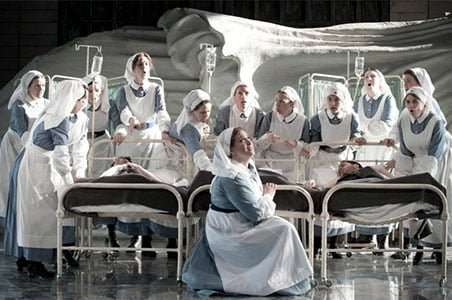 The Garsington Opera Chorus was in full and crisp voice, and plenty of verve, for its many appearances. The Orchestra, of eager young musicians (like the Chorus), revelled in Rossini’s turbulent music; the complement of woodwind players were well-honed, and seduced during the interludes; David Parry’s sense of the dramatic kept Rossini’s music fizzing.

The Opera Pavilion at Wormsley (set in the rolling Getty estate) presents opportunities and challenges, the main one being the lighting as the walls are transparent. With clear blue skies at the start, the coming of night mirrored the action, until the final entombment where the darkness outside heightened the claustrophobia on the stage, itself rather static against a backdrop of a large decapitated statue of a goddess. Anna and her coterie are nurses, Erisso and his generals dressed in suits evoking the 1920s, whereas Maometto is in-period as a barbarian Turk. It does not make much sense, but the opera itself has much to offer and to savour.

Garsington has certainly made the case for Maometto secondo, which heralds the advent of Verdi (Otello sprang to mind throughout) and his brand of strong narrative, Rossini moving towards a seamless whole for each Act. In many respects this is Rossini’s most challenging opera (it is certainly one of his longest), which Garsington makes very rewarding.